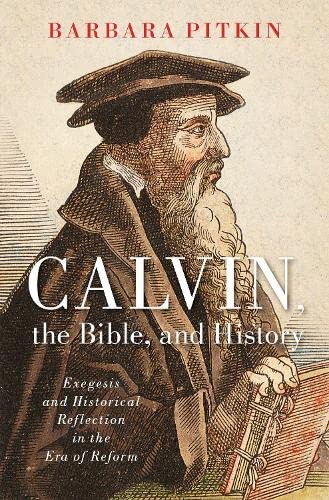 Calvin, the Bible, and History: Exegesis and Historical Reflection in the Era of Reform

Stanford historian Barbara Pitkin presents seven case studies of Calvin’s “historicizing approach to scripture” (p. 2). Granted scripture’s purpose, how did the Genevan commentator, lecturer, and preacher understand sacred history as related by the Bible? How did he distinguish between historical anachronism and enduring instruction? Pitkin contextualizes Calvin the exegete in two ways: She illumines the continuities his work bears to medieval Christian biblical interpretation, as well as how he was shaped by the interpretive tools of Renaissance and the “theological priorities of contemporary reforming movements” (pp. 2–3).

The opening chapter introduces issues relevant to Calvin’s historical consciousness, hermeneutics, and exegetical practice. Then, the volume proceeds through a series of investigations into the reformer’s interpretation of various biblical books, motifs, and figures spanning both testaments, a range of genres, and the length of his career. One thing that emerges from these studies, each significantly reordered and updated for the present work, is a finely textured sense of the varied ways Calvin’s understanding of historical past relates to the present. Thus, although Calvin’s portrait of Paul includes historical remoteness, the apostle’s writings also contain “universal, doctrinal lessons” which “transcend” their original setting (p. 45) and contain the “central Christian truths that guided the interpretation of all of scripture” (p. 67). Pitkin highlights that in his commentary on John’s Gospel, Calvin often focuses on the salvific mission of Christ in history rather than the more traditional prioritisation of Christological and Trinitarian doctrines.

Calvin’s historical consciousness becomes more pronounced in his later works on the Old Testament. There he prioritizes David’s exemplary faith more than his prophetic status, emphasizes a more ecclesiological than Christological interpretation of Isaiah’s prophecies, and delimits the fulfilment of Daniel’s messianic prophecies to Christ’s first advent. Equally compelling is how Calvin’s training in contemporary French historical jurisprudence inflected his rearrangement of the legal and historical material in his harmony of Exodus through Deuteronomy. Calvin’s sermons on 2 Samuel indicate how Israel’s experience of the strife between Saul and David is instructive for contemporary Christians living through the coming of religious war to France.

The coordination of historical past and meaning for the religious present is one of the most interesting features of these studies. For Calvin, the biblical past both possessed “its own integrity and remoteness” and was “nevertheless profoundly meaningful and relevant for Calvin and his contemporaries” (p. 219). As Pitkin notes, Calvin’s derivation of instruction for his readers and auditors depends upon his understanding of “the overall purpose of scripture, [and] the kind of history it relates” (p. 200). What, then, undergirds these commitments?

The Bible, although undoubtedly a historical text and source, is also God’s “normative foundation” for Christian teaching and life in the present (p. 211). In Calvin’s view, scriptural history is connected to the present through divine providence. Therefore, rather than extraneous details, the peculiarities of the biblical past are themselves “the very locus … for contemporary relevance” (p. 223). Such is clear in Calvin’s frequent appeal to the metaphor of the “mirror” of the past for present instruction of the church.

Throughout the book, Pitkin treats the reader to an astonishing range of scholarship on both early modern exegesis and Calvin’s place in the history of biblical interpretation. The volume contains the highest historical scholarship as well as appealing, lucid writing, inviting the reader to enjoy the depths of the reflection contained here. It is both an important addition to work on early modern hermeneutics and a steep but ascendable introduction to scholarship on Calvin’s exegesis.

Pitkin is precise and careful throughout, qualifying and weighing judgments and observing where further study is needed. The observations and conclusions contained here invite application and reflection to a range of neighboring conversations. How does Calvin’s understanding of history differ from the historical consciousness operative in various models of hermeneutics? More specifically, how might such a portrait of the indispensability of history–especially history as providentially ordered by God–contribute to contemporary debates about scriptural exegesis, historical-critical, theological, or otherwise? Whatever questions one brings to this work, Pitkin’s volume is an illuminating study and an offering of the highest level to the growing literature on Calvin’s exegesis.