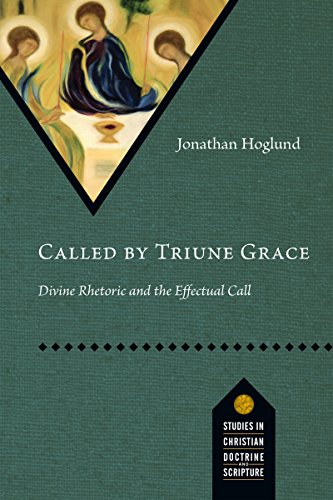 Called by Triune Grace: Divine Rhetoric and the Effectual Call

Jonathan Hoglund offers a fresh perspective on a traditional Reformed doctrine in Called by Triune Grace, the latest volume in IVP Academic’s “Studies in Christian Doctrine and Scripture” series. Hoglund sets out to offer a “dogmatic account” of the effectual call, one that defines effectual calling as an instance of divine speech and relates effectual calling to regeneration (p. 4). The convergence of both of these purposes comes in Hoglund’s unprecedented use of the term “converting change,” which serves to highlight the fact that effectual calling in Scripture and in the Reformed tradition is a means of speaking about the divine cause of an individual’s public and social conversion (p. 17).

In chapter one, Hoglund begins this retrieval project by summarizing previous Reformed work on the effectual call, non-Reformed challenges to it, and, most importantly, the particular lacuna which he seeks to address. While the Reformed tradition, according to Hoglund, “has most faithfully explored the biblical text” [with respect to the effectual call], he notes that it has continued to wrestle with how to adequately account for not only the divine causation of conversion but also its primary identification as speech in Scripture (p. 16). Hoglund seeks, therefore, to offer a dogmatic account of the effectual call via communicative theism by employing a method that treads the Websterian ground of biblical reasoning. This account is intended to explain the effectual call not only as divine action more generally but as divine action via divine speech, and to therefore explain the relationship between that spoken action and its result, regeneration.

Kevin Vanhoozer’s and Michael Horton’s work in this area of communicative speech, particularly as it relates to the effectual call and its twin affirmations of divine activity and human response, is the subject of chapter two. Hoglund uses these two Reformed authors both to ground his own understanding of effectual calling as divine converting speech and also to provide areas where his own study will contribute to this understanding. For Hoglund, Horton’s account tends to emphasize divine action at the expense of human response, while Vanhoozer’s account at times seems too intellectualized, minimizing the noetic effects of the fall (p. 39). The next two chapters then contain Hoglund’s own communicative account of the effectual call, first via exploring the call in Paul in chapter three and then summarizing the call’s content––“Jesus is your saving Lord”––in chapter four.

Two pairs of chapters explore two other biblical ways of referring to converting change in chapters five through eight. First, in chapters five and six, Hoglund examines the image of light and its usage in referring to conversion, both in terms of creation (“light out of darkness”) and illumination. Second, in chapters seven and eight, Hoglund demonstrates that conversion is spoken of using new birth and resurrection language. Hoglund’s conclusion after these four chapters is that these images, taken collectively, are all referring to the act of conversion, an act that is predicated on divine initiative and efficacy and also that is best defined via “communicative categories” (p. 168). In other words, these regenerating acts can and should be located dogmatically with the effectual call, since it is the effectual call of God that regenerates the human heart.

In chapter nine, Hoglund draws all these themes together––effectual calling, communicative theism, regeneration––by arguing that the effectual call is best described as an instance of triune rhetoric. In the call, God freely acts to dialogically but sovereignly speak with converting rhetorical force to the unbeliever. While the unbeliever must participate in this communicative act via responding, this response, according to Hoglund, has already been drawn up into the larger communicative action of God. God’s free act of converting speech therefore both precludes and includes the volitional assent of the human being. Hoglund here combines speech act theory with ancient rhetoric, describing this divine act of speech as God the Father, the authoritative ethos, uttering the locution via the illocutionary means of God the Word, the rhetorical logos, or argument. In doing so, God the Spirit ensures the perlocutionary force of this divine speech by serving as its pathos, its rhetorical force. The Spirit sovereignly persuades the hearer, who responds appropriately to the Father’s perlocutionary intent––the hearer is converted, meaning he or she is regenerated by this call. This leads to a number of dogmatic conclusions regarding the ordo salutis, ones that remain firmly within the Reformed tradition, in chapter ten.

Hoglund’s work is insightful, creative, and beneficial for all those who hope to understand what it means for God to call an individual to himself. Called by Triune Grace is what retrieval works should be––not simply retreading old ground, not departing radically from one’s tradition, but exploring that tradition in fresh and exciting ways that lead both author and reader to new expressions of gratitude for God’s triune grace. Hoglund demonstrates throughout a familiarity with his tradition as well as a commitment to understand the faithfulness of that tradition to its ultimate authority, holy Scripture.

Of course, if one does not share Hoglund’s Reformed tradition and its doctrinal commitments, there will be areas of disagreement, some stringent. This is especially true in this book, since effectual calling is one of the sticking points that separate many non-Reformed traditions from Reformed ones. Those who hold to an Arminian or Molinist understanding of soteriology and the ordo salutis will, I think, remain unconvinced of Reformed understandings of salvation and particularly of the effectual call. Hoglund’s exegesis, and the biblical warrant he gives for an irresistible call based on unconditional election, is relatively cursory and does not offer any real advance on other Reformed biblical defenses of those doctrines.

Hoglund also does not engage for long with his doctrinal detractors in this regard. That is not to say he doesn’t engage them––he does––but it is to say that his purpose in the book is not really to convince non-Reformed theologians of Reformed soteriology. Rather, his goal is to provide an account of the Reformed doctrine of the effectual call from the perspective of communicative theism, with help from speech act theory and ancient rhetoric, to demonstrate that the call is an instance of converting change predicated on God’s divine speech and resulting in human regeneration. And with respect to this purpose, Hoglund succeeds.

Those interested in speech act theory, the doctrine of conversion, and communicative theism should read Called by Triune Grace. While a non-Reformed reader may not agree with how Hoglund understands the effectiveness of God’s call, his book is nevertheless beneficial in highlighting the rhetorical, communicative, and dialogical aspects of that call and how they relate to conversion and regeneration.