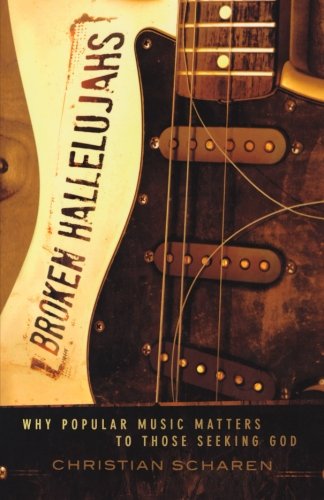 Broken Hallelujahs: Why Popular Music Matters to Those Seeking God

Christian Scharen, echoing Andy Crouch, reminds us that “culture is not some distinct area from which we can remove ourselves” (p. 140). Fish, as the saying goes, don't think much about their being wet. And yet we sometimes approach the issue of engaging culture all too naively. Quite simply, we live in culture, and we are engaging it all the time. The question Scharen puts before us is this: How can we live in culture theologically? As the chapters of his book unfold, three options of living theologically in culture present themselves.

First, there is that of James Dobson, formerly of Focus on the Family, and Plugged In, the entertainment-analyzer for Christians. Though Focus on the Family has put some distance between them and their founder, Scharen notes how Plugged In pulses along the same vein as Dobson. Though blessed with a radio voice, when Dobson speaks of culture he tends to sound “shrill,” as Scharen puts it (p. 103). Popular culture, according to Dobson, shows primarily the decline of culture. So follows Plugged In. If you're looking for tallies of swear words in rap albums or movies, consult the reviews at Plugged In. If you're looking or listening for a more a sympathetic or profound engagement of culture, Scharen argues you'll need to look elsewhere.

The elsewhere includes the Fuller Seminary duo of Craig Detweiler and Barry Taylor. They stand at the other end of the spectrum on engaging culture, promoting a program of creating “a theology out of popular culture rather than theology for popular culture” (cited by Scharen on p. 118). Scharen proceeds to indict their proposal for privileging pop culture over Scripture. Put away the tallies of swear words because pop culture sets the agenda for theologizing today, Detweiler and Taylor argue. They promote a reversal of the “hermeneutical flow,” arguing that you start with culture and not with Scripture (pp. 117-21). Scharen corrects this misstep, persuasively making a case for Scripture as the only possible starting point for the “hermeneutical flow.”

Between these two approaches to cultural engagement on the right and left flanks, Scharen rushes up the middle with his proposal of a renewed and robust imagination. In chapter one, Scharen reveals his intentions: “The question at the heart of this book is how to find-or better yet, how we are found by-a God of promise and mercy who offers us all an imagination deep and substantial enough for the struggles the world faces in our day” (p. 17). Yes, C. S. Lewis has never really left the building. Playing off of Lewis's brief but pivotal essay, An Experiment in Criticism (1961), Scharen's book may be understood as a theological-cultural exploration of imagination.

Scharen looks (mostly) to pop music as a case-study for the contours of such an imagination. The music of Leonard Cohen becomes the first foray (ch. 2). His lyric “broken hallelujahs” pulls duty as the book's title. Then Scharen heads South to listen to some Blues (ch. 3). Scharen wants us to hear in these songs not the avoidance of suffering and hardship, as we so often attempt, but the head-on confrontation with it. Borrowing from theologian David Ford, Scharen points out how Scripture repeatedly turns to the “cry,” adding that Christian wisdom (living skillfully) is heard in the cry (ch. 4). These songs help us see more clearly our hermeneutic, one that leads us ultimately to the cross and then from the cross to the challenges of our day. Scharen, himself Lutheran, offers a delightful twenty-first-century riff on Luther's theology of the cross. Scharen also makes the case that these are not simply cries for mercy amidst pain and suffering and the ravages of sin. The cries are also for joy. Herein lies the rub: broken hallelujahs are hallelujahs still.

Scharen's remarkable blend of being both poetic and profound-and everywhere theologically minded and informed-comes out nowhere more prominently than in his choice of Leonard Cohen's lyric “broken hallelujahs,” from Cohen's song “Hallelujah,” as a focal point. Arguably one of the most frustratingly enigmatic songs, you simply can't ignore it. But you also can't merely enjoy it either. The song is in the end perhaps a bit like beauty itself. It remains elusive. And as such it compels a listen (and the tune has a way of sticking with you anyway). Someday we will arrive at the final verse of Cohen's song. The broken will fall off and the pure, true, righteous, and just “hallelujahs” will be sung. But for now we need to hear the broken hallelujahs. For now we live in some ambiguity and perplexity. King David, also a musician, lived there himself and sung about it. So did Luther. So, Scharen commends, should we.