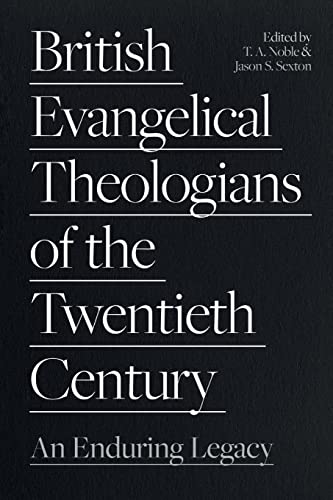 British Evangelical Theologians of the Twentieth Century: An Enduring Legacy

Looked at from one perspective, this new volume (hereafter cited as BET), edited by Tom Noble and Jason Sexton, constitutes a clear milestone. There is a past century of British evangelical theology to be celebrated and reflected on. Given the general retreat of Christianity in Britain across the last century, the endurance of evangelical theology is no mean achievement. In that period, the dominant approaches to the study of Scripture and Christian theology were determined in the universities. As elsewhere in the Western world, British universities moved from teaching Scripture and theology in keeping with traditional confessional commitments to teaching these disciplines scientifically, i.e., wherever unfettered research might lead. Colleges of theology beyond the universities, even those answerable to Christian denominations with confessional commitments, soon approximated the research model advanced by the universities. Thus, Congregationalist scholar C. H. Dodd (d. 1973) described his own theological education as consisting of “etiolated Calvinism, Calvinism drained of the good red blood of its dogmatic theology” (Frederick Dillistone, C. H. Dodd: Interpreter of the New Testament [Grand Rapids: Eerdmans, 1977], 33). The trickle-down effects of this uncertainty proved paralyzing for the churches. Yet, after such a century, British evangelical theology still remains, fostered both in some denominational colleges which have resisted general theological trends and by a growing number of university lecturers who uphold a supernatural Christianity and a definite biblical and theological position.

However, looked at from a second perspective, the reader of BET is provoked to ask the question, “What kind of evangelical Christianity has survived the turbulence of the past century?” The volume under review presents us with a quite elastic coalition of Christian thinkers who conform, more or less, to the quadrilateral of evangelical commitments articulated by David Bebbington in 1989.

On the one hand, we have described some theologians whose chief priority was maintaining and propagating the evangelical faith as they had received it. James Orr, W. H. Griffith Thomas, David Martyn Lloyd-Jones, James I. Packer, and John Stott, all graduates of distinction, were marked out early on as men of real promise. They were able to freshly articulate, as well as defend, the received evangelical faith in a rapidly changing twentieth century. They did not merely reiterate views from the past; they were thoughtful conservers of the evangelical faith.

But on the other hand, in a second and larger group, we find theologians who, while like the first group in devotion to Christ and his cross and in a general reverence for Scripture, also embraced a critical perspective regarding aspects of the evangelical teaching of their upbringing. These critiques were the outworking of the ‘scientific’ attitude to theological studies, which had taken control when the twentieth century began. They were, to varying degrees, revisionists.

For such reasons, young Lesslie Newbigin, while a definite Christian believer, wanted nothing to do with the Inter-Varsity Christian Union at Cambridge on account of its definiteness in doctrine. James Denney, P. T. Forsyth, W. E. Sangster, and Colin Gunton were all rather evasive as to what biblical inspiration meant and guaranteed. Sangster, facing the colossal mortality of wartime, flirted for a time with universalism; he also explicitly integrated evolutionary themes into his teaching. Forsyth and H. R. MacIntosh both embraced kenotic understandings of the incarnation of Christ. T. F. Torrance (with his brother James), while early supporters of Inter-Varsity in Scotland, eventually became known for their opposition to some major threads of evangelical teaching in the Westminster Confession of Faith (the standard of their Church of Scotland). In sum, this second grouping represented a strong element of discontinuity with what had gone before. They did not self-identify primarily as evangelicals and were, in effect, mediating theologians, standing between received evangelical conviction and modern criticism.

All this to say that BET has not adequately treated the question of what constitutes an evangelical theology in the present theological climate. No doubt, all the individuals featured in the volume would have been able to recognize one another as Christian believers. The question is: would they also have recognized one another as evangelicals? The reviewer does not think so unless, for both types, the qualifying adjectives—conservative and liberal—would be employed. But this suggestion will be opposed by many. One may recall that F. F. Bruce (d. 1990) wanted to be identified as an un-hyphenated evangelical.

Now in support of such distinctions, it is worth noting that the fine essay on James Denney by the late Thomas Finley uses the adjective ‘liberal’ to describe the evangelical stance of Denney and a number of his Glasgow colleagues at the turn of the century. Further, in an earlier chapter on James Orr, Andrew McGowan points out that this Glasgow colleague to Denney was clearly not of that tendency. In fact, the adjective ‘liberal’ was a widely-used term a century ago and was embraced by those to whom it referred. It helped them to distance themselves from views that they considered to be worn out. The term ‘liberal evangelical’, meaning something like today’s term, ‘progressive’, deserves to be rehabilitated for modern use. The non-disparaging use of such adjectives would help us around an impasse we currently face: the use of the term ‘evangelical’ by theological conservatives (of which the reviewer is one) as if they alone have the right to the use of it. This view is not in agreement with historical usage across the past century or more.

In short, the volume under review would have been more illuminating if it had more frankly acknowledged the important divergences among these theologians for whom there were, admittedly, substantial agreements. If the adjectives conservative and liberal had been utilized throughout BET, a desirable theological ‘détente’ between two positions might have been better advanced. The two tendencies are an ongoing but under-recognized feature of evangelical theology.

In his admirable telling (elsewhere) of the story of Tyndale House, Cambridge (Leicester: Inter-Varsity Press, 2006), editor Noble demonstrated that this differentiation among British evangelicals was out in the open in the early 1950’s at Cambridge. And when, in 1952, Inter-Varsity Press (UK) acquired the publishing rights to James Denney’s 1903 classic, The Death of Christ, it made editorial changes (subsequently protested against) to guard against views that it considered unsound. Conversely, when J. I. Packer articulated what he considered to be an evangelical doctrine of inspiration in his Fundamentalism and the Word of God (1958), he did not speak for the liberal evangelicals (many within the Church of England) who in that decade were still determined to shun any approach to inspiration they considered to be ‘mechanical’. What we have in BET, therefore, might fairly be called ‘Varieties of British Evangelical Theology’.

In concluding comments, Jason Sexton correctly points out (pp. 262–63) that compared to a half-century ago, there has been an increase of evangelical representation in British university theology departments. This true fact needs to be tempered by two others. First, the recent ordeals experienced by Union Theological College, resulting in a termination of its relationship with Queens University, Belfast, illustrate how the modern British university can constrain the maintenance of evangelical theology and ethics. Second, in these decades, British university departments of theology have been modified so as to encompass the major world religions. Buddha and Mohammed have been incorporated as subjects of research and teaching alongside Christian theology. While this academic coexistence can bring with it opportunities for mutual understanding, it hardly enhances the hope that such departments will be the means for ensuring a robust future for evangelical theology. Evangelical theology for the future will require principled collaboration, which binds together those in broad agreement with their notable differences named.