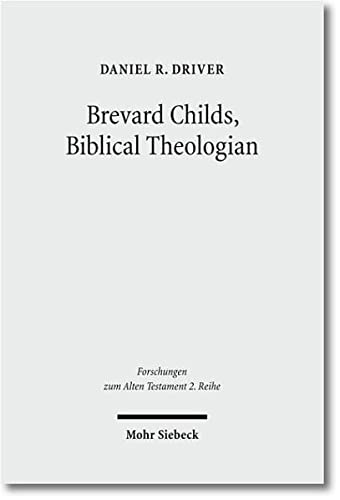 Brevard Childs, Biblical Theologian: For the Church’s One Bible

By any measure, Brevard Childs (1923–2007) made a significant contribution to the field of biblical studies during his forty-one-year tenure at Yale University. The mixed reception of his oeuvre (a dozen technical monographs or commentaries plus scores of articles), the present volume argues, is due in large part to confusion over precisely what Childs said. This revised dissertation, completed under G. Macaskill (with W. Moberly as the external examiner) at the University of St Andrews in 2008, is the first adjudication of the varied understandings of Childs that can have recourse to his full corpus, the last element of which appeared in the same year.

The work begins with an overview of Childs’s career, specifically in his self-cast role as a “biblical theologian” who sees Jesus Christ as the source of the “inner unity” possessed by the Old and New Testaments together, and introduces canon and history as two major poles in his thinking. The first major section then reviews thoroughly the varied receptions accorded to Childs’s work in the English- and German-speaking worlds. Along the way Driver ably teases out the main lines of Childs’s thought, paying special attention to its relationship with Barth’s thought and demonstrating the dynamism that characterizes Childs’s move (around 1970) from a focus on the parts (via historical criticism) to a focus on the whole (the canon as a Christian document [p. 15]). This contrast eventually becomes nearly absolute for Childs: “theological compromise with the historical-critical approach fails,” as Driver puts it (p. 93).

The second section reflects on the revolutionary nature of Childs’s thesis, which could be stated as the theologian’s obligation to reflect on the Scriptures as the context in which early Judaism originated (with an emphasis on social, religious, and other “settings”) rather than (as H. Gunkel and many after him) to take the original setting as determining Scripture’s meaning. This contrast brings to the fore the interpretative tension between the text and things external to it (cf. the interplay of canon and history, noted above). The third and final section applies itself to the core of Childs’s work, the way in which the OT bears witness to Christ. The work also includes full indexes and several pieces of Childs’s correspondence in an appendix.

Childs’s reluctance to make his method explicit (p. 56) is a primary cause of his varied reception within biblical and theological studies. Here I will focus on the related issues of intention and reference since they arguably lie at the heart of Childs’s constructive proposal. Driver contends that Childs “concludes, on expressly Christian grounds, that biblical reference, and hence biblical intertextuality, is not midrashic but deictic. In other words, the text of scripture points to its subject matter (res), which is the one God known in the face of Christ” (p. 30). Childs did not arrive at this naively, to say the least. Driver chronicles, among other things, Childs’s attempts to see the relation of later Scripture to earlier Scripture in terms of midrash before choosing in favor of a “literal sense” which is “extended through figuration” (this is the second important element of dynamism in his thought, taking place in the early 1980s). The link between the testaments is one that grows out of the Scriptures themselves: Childs contended that “biblical intertextuality arises as a forward looking extension of a text or as a retrospective enrichment of traditional language and that it rests in either case ‘on the same inner logic of Scripture’s textual authority’” (p. 101). This extension’s intentionality is “coextensive with the meaning of the biblical text” that it “figures” (p. 100), and “the nature of the biblical referent must be determined by the text itself which points referringly both to the Creator and the creation in a wide variety of different ways” (p. 140).

This brings us to a crucial point in attempting to understand Childs, namely, his view of authorial intent. For Childs, the canon’s “shape” is of a piece with its intertextuality and intention, and the canon was shaped by the communities that successively received (and modified) “the developing canonical corpus” (p. 77). In a context not addressed by Driver, Childs clarified what this involves when he affirmed that his interpretation of Scripture plays a language-game in which meaning is “a function of a cultural system rather than an expression of intention” (Childs, “Response,” JSOT 16 [1980]: 52). It is not clear to me that Driver has (or has even claimed to) resolve ambiguity in Childs’s hermeneutic on this point, but another recent analysis suggests that Childs’s program is perhaps not quite as epistemologically coherent as Driver’s analysis seems to suggest (cf. K. Vanhoozer, The Drama of Doctrine: A Canonical Linguistic Approach to Christian Doctrine [Louisville: Westminster John Knox, 2005], 219).

Still, the comprehensive scope, theological insight, and analytical skill with which Driver treats his challenging subject make this work more than worthy of careful reading and rereading. It will surely advance our understanding of the significant issues involved.