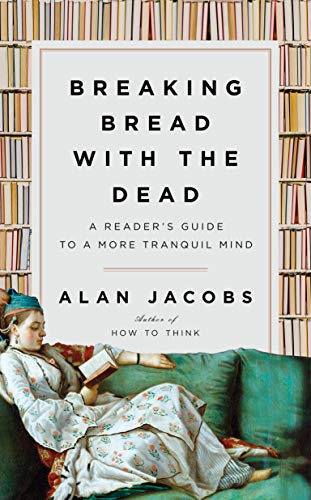 Breaking Bread with the Dead: A Reader’s Guide to a More Tranquil Mind

Written by Alan Jacobs Reviewed By Zachary A. Howard
History and Historical Theology

In an age of outrage, a book on learning from dead authors for the sake of a more tranquil mind stands out among recent titles. With this book, Alan Jacobs completes his trilogy that began with The Pleasures of Reading in an Age of Distraction (Oxford: Oxford University Press, 2011) and continued with How to Think: A Survival Guide for a World at Odds (New York: Penguin, 2017). All focus on “a few things” that Jacobs has learned “in my teaching life that are relevant to our common life” (p. xii). The book, then, emerges from Jacobs’s years teaching humanities first at Wheaton College and now at Baylor University and responds to our “common current attitude” that “all history hitherto” is evil (p. 11).

Yet, this book’s structure is nothing like a college lecture or a typical how-to or self-help styled book. Jacobs writes the book more in the essay genre, which he compares to a spiral staircase that winds around a central idea viewed at ascending vantage points. Like an essay with chapters, this book spirals up around the central idea that “the deeper your understanding of the past, the greater personal density you will accumulate” (p. 18–19, original emphasis).

Jacobs warns, though, that “any genuine kinship with our ancestors must be earned through hard mental work.” (p. 77, original emphasis). And his book commends, primarily through examples, doing that hard, mental work of expanding one’s temporal bandwidth by hosting a “permanent banquet” with dead authors, not just the ones we admire but even those who we find adverse to our values. To make his case, Jacobs both defends why keeping such table fellowship matters while he also commends strategies for not simply replacing the errors of this moment with the errors of the past.

First, breaking bread with the dead matters not merely because it increases personal density, but ultimately because it demands that we cultivate a “disposition to love.” Jacob’s argument for developing a more tranquil mind—or greater personal density—is ultimately “an argument for a genealogy of love” (p. 151). It is, of course, much easier to love a dead author who cannot talk back to you, yet, Jacobs believes, cultivating the habits of reading the past with generosity and love can not only mature us mentally, but also engender greater love for those in the present.

Second, Jacobs sifts through different approaches to reading and identifies better ways for approaching the past. For example, in chapter 4—“The Past Without Difference”— Jacobs warns of two opposing tendencies when reading the past. On the one hand, we can emphasize “negative selection” that rejects a book or person from the past as soon as we discover something that grates against our present cultural values. “But we can also get ourselves into the opposite problem—a determination to read in a sanitizing way—when faced with a text that we know is in some sense a ‘classic’ but which offends, or seems to offend” (p. 70). Instead of reading those ways, Jacobs commends in chapter 5—“The Authentic Kernel”—looking for what one essayist calls “utopian moments” where a work reveals genuine humanity despite the book’s contrary values. Such a habit of generosity towards what one reads expands personal density.

Jacobs marshals a panoply of evidence from authors as diverse as Horace and Zadie Smith to commend this type of sympathetic engagement. In doing so, Jacobs traverses an impressive variety of topics and concepts, frequently explaining how the perspective of “the modern reader” (p. 127) may be at odds with a past author’s sentiments. Yet, since “the modern reader” is a diverse group holding a wide range of positions on the topics Jacobs mentions—like feminism, climate change, or Stoicism—it makes his use of the inclusive “we” occasionally ambiguous. Perhaps this ambiguity stems from a “crisis of audience” that Jacobs has described in interviews earlier in his career. As Jacobs felt disoriented by having to “code switch” between his scholarly work for a secular academy and essays for Christian magazines and journals, he realized that God was calling him to speak to both audiences. Yet, perhaps more than the previous two books in this trilogy, Jacobs’s intended audience felt the least clear in this book.

Nevertheless, Jacobs’s tenor of generosity is a welcome model for engaging past and present authors. He demonstrates how and why listening generously to real people and fictional characters from the past should create a “double realization,” namely, the discovery that such figures can both affirm values we already hold and simultaneously affront us by holding contrary values. In that moment, we must avoid the impulse to immediate “moral triage” that demands “straightforward binary decisions about whether we admire or despise a given person” (p. 131). Jacobs’s comments about the authors in this short book exemplify a generous disposition to love.