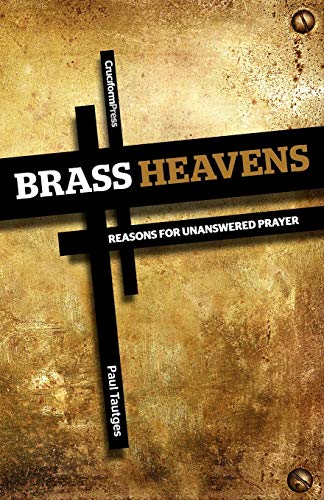 In this book Paul Tautges tackles the toughest aspect of Christian praying—unanswered prayer. In doing so, he doesn’t flinch from the “whole counsel of God.” He begins by grounding a theology of prayer in the nature of the triune God—a God whose very nature is to share generously. Tautges writes, “We cry out to God because we expect him to listen” (p. 7). It seems like an obvious point, but knowing God’s generosity is inseparable from a vibrant life of prayer. As evangelicals drift into thinking of prayer almost as a mystical abstract “relationship,” it is refreshing to see Tautges dwell on the DNA of prayer. We pray because God hears.

The second half of the book examines six reasons for unanswered prayer. The first five (pet sins, neglected reconciliation, religious sins, inconsiderate husbands, and stubborn pride) focus on how our sin blocks the free flow of prayer to our Father. The sixth reason—testing our faith—deals with the more Job-like angst where the blocked prayer is God maturing us. He closes this section with a stunning quote from Spurgeon encouraging persistence in prayer (pp. 113–14).

I enjoyed Tautges’s immersion in the Word and his focus on the way disobedience blocks our felt communion with God. Brass Heavens is solid meat and potatoes for the Christian. The book is a slow unpacking of one aspect of the fear of God: if you live a life of quiet rebellion against God, the heavens will be brass. It’s that simple.

No book on prayer can handle every aspect of prayer—the subject is so deep and rich. Nevertheless, I was hoping for more on the anguish side of prayer where, like Job, our prayers aren’t answered and we don’t know why. Tautges touches only lightly on our lost Hebrew lament tradition (“My God, my God, why have you forsaken me?”) in the last section of the book. Sometimes in the evangelical tradition we are better at unpacking sin than a mystery.

Another suggestion for improvement is that in the last section of the book, one wishes for a differentiation between the sins of pride and self-will. Tautges begins by describing someone who is self-willed, but then calls it pride. In the post-Augustine tradition we tend to miss self-will as a master sin. It’s an easy miss because pride, well, fills the room with its large ego. But the single overarching characteristic of Jesus’s earthly life is his submission to his Father. Identifying self-will fits well with Tautges’s first five reasons for unanswered prayer because all of them are tinged with self-will.

One final suggestion is merited, though we remember that one book can’t do everything. Tautges looks at how un-holiness blocks prayer, but he neglects the opposite biblical theme of how holiness unleashes powerful prayer. In general our evangelical tradition is better at dealing with the negative than giving a positive vision. So we have largely lost touch with James’s teaching that “the prayer of a righteous person has great power” (Jas 5:16). It is true that prayer is weakened in our lives because of sin, but we need not shy away from the opposite truth: that prayer is empowered by holiness. It is. There is a peculiar power in a holy life that has endured in suffering, through thick and thin, that has willed-to-love in such a way that self has died.

Brass Heavens is a worthwhile read. It is a useful primer, eminently practical, on how sin blocks prayer. Tautges’s richly biblical vision, if followed, will unleash new freedom and power in your prayers.