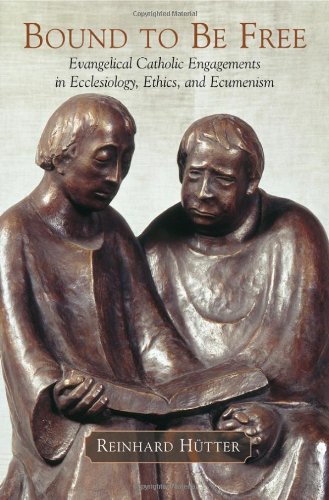 BOUND TO BE FREE. EVANGELICAL CATHOLIC ENGAGEMENTS IN ECCLESIOLOGY, ETHICS, AND ECUMENISM

The recovery of the church is at the centre of this collection of twelve essays by Reinhard Hütter, a Lutheran professor of theology at Duke Divinity School. One the impacts that modernity has had on the Christian faith has been the attempt to reduce it to a ‘private gnosis’ (19), i.e. a religious experience with little ecclesial awareness and public significance. In many respects, contemporary Protestantism, both in its fundamentalist outlook and in its secularised version, has often run the risk of pursuing a private religion. This is a strong motivation to listen to what Hütter has to say.

In the book there is much to be commended, especially its vigorous calling of the church to honour her public space and to reform her practices of freedom in God and submission to God’s commandments. Another asset is the chapter on a ‘critical appraisal of Karl Barth’s dialectical catholicity.

My overall reservation has to do with the ‘spiritual ecumenism’ that runs through the pages of the book, especially in the third section. Spiritual ecumenism is an expression that can mean many things. Though Hütter does not define it (he often quotes Cardinal Walter Kasper using it), his exercises in ‘spiritual ecumenism’ are in danger of losing evangelical sharpness at the expense of Catholic correctness.

Two examples are in place. In assessing the encyclical Fides et ratio, Hütter examines this document which envisages the relationship between faith and reason in terms of an updated Thomist scheme of nature and grace. In this view reason has its own autonomy, but can be elevated by the supernatural power of grace: not quite the biblical way of understanding the impact of sin on reason and its need to be captivated to Christ. Unfortunately, he has nothing to say about the need to rethink that relationship in terms of the creation-fall-redemption motif, which is the evangelical contribution to the discussion. Moreover, he forgets to say that Fides et ratio strongly opposes the Sola Scriptura principle (par. 55) and, though it quotes dozens of theologians and philosophers from various backgrounds and orientations, it makes no reference whatsoever to Protestant thought. Why is there this omission to articulate a fair criticism to the Vatican document? Is it against ‘spiritual ecumenism’?

Another example comes from a chapter on Christian unity and papal office. Here, Hütter makes a good summary of the content of the encyclical Ut unum sint in which the Pope presents the way forward for ecumenism according to the Vatican. Since the papal office is an ecumenical problem, the Pope is ready to discuss its forms without changing its theological and iure divino substance. Hütter then suggests that the bishop of Rome could preside over the multiplicity of churches as sign of unity and operating iure umano(193). Apart from envisaging unity in Episcopalian terms, the suggestion fails to address the thrust of the encyclical; i.e. the divine law dimension of the papal office is not negotiable. Why does he fail to state that the papal office, in light of Ut unun sint and not in spite of it, needs to be reformed according to Scripture therefore changing structurally its established self-understanding? Evangelically speaking, the papal office is not a question of ecumenical details, but of theological substance. If Ut unum sint has another conviction, Christian boldness still demands speaking the truth in love.

Coming back to ‘spiritual ecumenism’, if it means speaking lovingly while downplaying truth in the context of ecumenical correctness, this is not the biblical way of addressing the complex issue of Christian unity. The ecumenical alertness is the weak part of this otherwise stimulating collection.