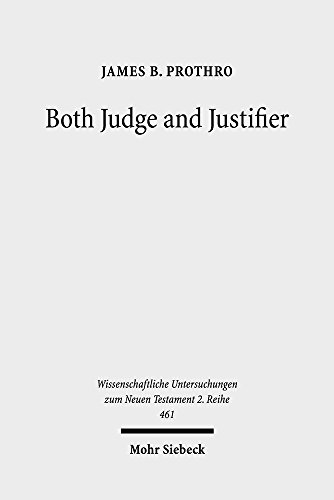 Both Judge and Justifier: Biblical Legal Language and the Act of Justifying in Paul

James B. Prothro currently serves as Assistant Professor of Theology at Ave Maria University. Both Judge and Justifier is the published version of his PhD thesis completed under the supervision of Simon Gathercole at Cambridge University. As is well known, the issue of justification in Paul’s letters is hotly debated, and Prothro’s monograph attempts to contribute to this discussion by addressing the basic lexical question: what does Paul mean when he uses the verb “justify” (δικαιόω)?

After introducing this issue, Prothro begins his work by staking the claim that Paul’s use of the verb “justify” is biblical legal language. This is clear, Prothro suggests, by virtue of the fact that both Paul and the Septuagint use the Greek term for “justify” exclusively for positive judgment in contrast to its typical usage as a term for negative judgement (pp. 3–5). In the remainder of the first chapter, Prothro surveys the variety of recent scholarly views about the meaning of “justify” in Paul, and he then suggests that the distinctive meaning that Paul attributes to this verb indicates that Paul’s employment of it should be examined in the context of its use in pre-Pauline Jewish literature written in Greek.

The following four chapters then examine the use of “justify” within this literature. Prothro surveys the use of “justify” first in contexts that involve only human actors and then in those that involve God in some capacity. Prothro subdivides the material on the basis of whether the scene in view involves only two parties in contention (“bilateral” scenarios), or two parties along with a judge (“trilateral” scenarios).

These chapters include several interesting conclusions. Prothro argues that, in trilateral scenarios, the verb “justify” likely never refers to the bare pronouncement of a verdict but rather to the judge’s siding with and enacting justice for one of the parties (pp. 57–60). He also finds a number of instances within bilateral contentions involving God in which the term is applied to a person or group who have done wrong but confessed or repented. Prothro concludes that in these passages “justify” must mean something along the lines of forgiveness and reconciliation (pp. 69–71, 74–76, 78–80). Furthermore, Prothro claims that trilateral scenarios involving God typically depict God as siding with Israel over against oppressors in the wake of the resolution of a bilateral contention between God and Israel (pp. 94–99). Finally, in his examination of the use of “justify” in relation to the Isaianic Servant, Prothro suggests that in the broader passage of Isaiah 40–55 God’s trilateral vindication of Israel over the nations merges with the theme of God’s bilateral contention against all idolaters (pp. 99–103).

With this background in place, Prothro then devotes one chapter each to 1 Corinthians, Galatians, and Romans. Prothro argues that, in the majority of the passages in which Paul uses the term “justify,” Paul has in view the bilateral scenario of God’s contention against human sin, and the term “justify” refers to the forgiveness and reconciliation that is extended to those who recognize that God is in the right (cf. pp. 124–26, 140–44, 158–85). In two cases, however, Prothro suggests that Paul uses “justify” for God’s vindication of his people over against other parties: Romans 6:7, which he interprets as the vindication of Jesus himself over against sin as a personified power, and Romans 8:33, which he understands as vindication not in relation to the charge of sin but in relation to the challenges of adversaries (pp. 186–205).

The concluding chapter reviews the argument of the book, and then highlights the significance of the study. Prothro suggests that his research largely vindicates and develops proposals made by Mark Seifrid (p. 210), and he points to a few broader theological issues for which his work has relevance.

Prothro’s book is in many ways a useful study. His focus on analyzing the verb “justify” is a welcome approach, and he is certainly right to focus on Jewish use of this term as the primary background for Paul. Nevertheless, it seems that in some ways Prothro has overplayed his hand.

Despite the validity of Prothro’s point about the proper background for Paul’s use of the verb “justify,” his assumption that Paul’s conception of the divine trial is wholly taken over from ancient Jewish sources underestimates the degree to which the first-century context may have influenced his imagination. For example, in Romans 14:10, Paul depicts the final reckoning as occurring before God’s “judgment seat” (βῆμα), a term (and architectural feature) absent from the Septuagint. One wonders if other aspects of first-century jurisprudence may have had an effect on Paul’s conception of divine legal proceedings, and the complete neglect of this material in Prothro’s work weakens his case.

Additionally, Prothro’s division of the theological legal scenarios into the categories of bilateral and trilateral is at times forced. Although God is sometimes a party in contention, a number of these passages also depict him as standing over the contention as judge at the same time. Along similar lines, the claim that a distinctive trilateral conception of justification is in view in Romans 6:7 and 8:33 fails to persuade. Both passages are better understood as referring to God’s vindicating judgment in relation to the charge of sin, especially the latter, which provides a retrospective and celebratory summary of where the argument of Romans has gotten thus far.

One also wonders if Prothro’s claim that justification at times means forgiveness and reconciliation is accurate. Although forgiveness and reconciliation are clearly in view in many of the passages to which Prothro applies this definition, Prothro does not even consider the possibility that justification in these passages is a legal finding rendered in light of God’s (logically) prior forgiveness of sin rather than being an act of forgiveness in and of itself. For a study that is focused on the lexical meaning of the verb “justify,” the lack of reflection and explicit argument at this point is disappointing.

Despite these shortcomings, Prothro has made a significant contribution to the study of justification in Paul, and his work does provide an effective challenge to several misguided interpretations of justification in Paul’s writings. His survey of the use of the verb “justify” in pre-Pauline Jewish literature written in Greek is particularly valuable, and his book as a whole is a resource to which discerning readers will be able to turn with much profit for many years to come.