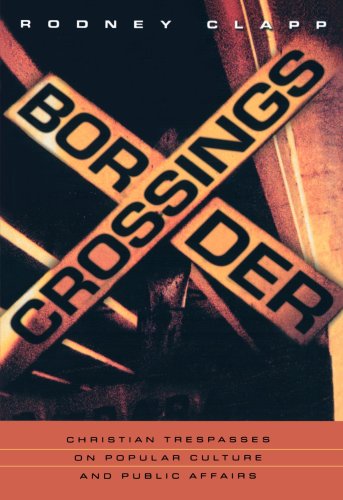 This is an eclectic series of essays from the former senior editor for academic and general books at IVP (US). The essays cover a wide range of topics: Jazz, Epistemology, Winnie the Pooh, Thanksgiving, The X Files, and the Eucharist to name but a few. The initial temptation is to dismiss this book as an ill thought out compilation of random articles for various Christian journals and magazines, but there is a clue in the introduction that suggests another reading strategy. ‘People learn how to farm, just as they learn how to read or build jet airplanes, from watching and listening and being apprenticed to masters who were themselves earlier apprentices’ (10). What Clapp offers in this book is an apprenticeship in the art of theological cultural critique. This makes the wide-ranging nature of the book a virtue as it allows for a wide variety of test cases on which to observe the critic in action. Clapp is a master of his art and he exposes the Western Evangelical Church’s accommodation to late modern culture.

Three areas receive consistent attention consumerism, individualism and epistemological foundationalism and each are dealt within a core essay. In ‘How firm a foundation?’ Clapp expounds his anti-foundational epistemology. Classical foundationalism argues that a belief is justified if it can be inferred from a set of self-evident foundational beliefs. Clapp rejects this approach as an accommodation to Enlightenment rationalism and argues instead for a more holistic approach to justification that takes into account the influence of tradition on shaping what we find self-evident. Clapp is heavily influenced in his theology and epistemology by thinkers such as Stanley Hauerwas, John Milbank, Alasdsair MacIntyre and George Lindbeck.

In ‘The theology of consumption and the consumption of theology’ Clapp explores the influence of advanced capitalism on Christian thought. He skillfully uses instances from the history of the church to demonstrate the subtle effect that changes in culture have brought on the values of the church. He argues that the reformation at least laid the foundation for western consumerism by ‘rationalising and submitting all of life to the criterion of efficiency, by rendering the making money honourable, by isolating or individualising the believer, and by so doing turning the believer’s attention inward toward introspection’ (133). There is a challenge in this chapter to re-evaluate our personal acquiescence to consumerism.

The third central essay is ‘From Family Values to Family Virtues’ where Clapp uses historical and biblical studies on the place of the extended family times to expose an atomism in western family life that sentimentalises the nuclear family and disregards wider social and communal responsibilities. Clapp argues that ‘Family needs purpose beyond itself and it mere sentimentality to survive and prosper’ (116).

This book draws together elements of Clapp’s other publications: Families at Crossroads (IVP, 1993), Consuming Passion (IVP, 1999) and A Peculiar People (IVP, 1996), and offers a helpful overview of his thought in one volume. There is however an ad hoc nature to the book as the articles were meant to stand alone and address an American evangelical audience. As a result there is a significant amount of repetition in the book because the dominant themes emerge in many different chapters and there are a number of places where identical paragraphs appear in the book. But the tutelage provided in cultural criticism is first rate. Clapp challenges theologians to venture outside of their cosy academic ghettoes and proclaim the implications of the gospel for public life and contemporary culture.