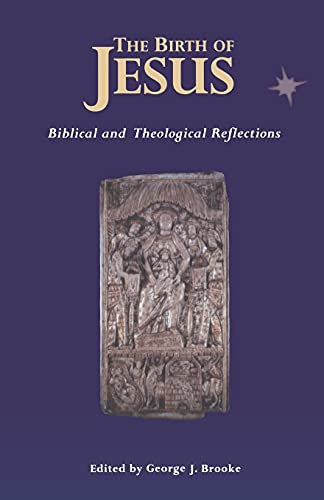 What are we to make of the doctrine of the virginal conception today, and what is its basis in Scripture? These are the questions asked by two accessible books on the birth of Jesus, each of which is sceptical about the historical value of the biblical accounts.

Brooke’s collection of essays arises from a conference held at Manchester to mark the 2000th anniversary of the bìrth of Jesus. The contributors approach the birth of Jesus from the perspective of their own disciplines, and in so doing raise a variety of interesting and provocative questions and suggestions. Thus, for example, Grace Jantzen suggests that Christian reflection on the death of Jesus has led to an unnecessary theological neglect of the actuality of his birth. Jesus, unlike Adam, entered the world as a child through birth and infancy, and this givenness of the nativity leads her to present the concept of human natality as something to set alongside an awareness of human mortality. Therefore she calls for an awareness that all humans are those who are born as well as those who will die, and she argues that an appreciation of natality will help to construct a theology that signifies a future and a hope.

Perhaps of most interest to readers of Themelios will be those essays that reflect either on the question of whether there is any historical content to the biblical accounts—could it have happened, and is there evidence to suggest that it did? Or on understanding the biblical accounts. Arthur Peacocke, writing in the light both of theology and biological science, addresses head on the question of whether it could have happened and claims that it could not. He argues that modern science and its understanding of the world as a closed causal nexus tends to exclude the possibility of any miracle, and that there is no good historical evidence to make the virginal conception an exception. Not all scientists accept that the universe is such a closed causal nexus, however, so this argument need not rule out the possibility of the virginal conception, although it does show the enormity of the claim. Similarly, it is not clear that modern genetics rule out the possibility of God causing a virgin to give birth anymore than it rules out the possibility of God acting to raise the dead.

Other contributors interact more exegetically with the biblical material. Todd Klutz draws attention to frequent Lukan connections between female chastity and the Spirit of prophecy in Luke-Acts. Graham Ward, discussing what he calls the politics of circumcision, suggests that Luke’s account of the circumcision of Jesus is a gesture of resistance to the cultural hegemony of Hellenism. Gentiles had great difficulty with circumcision, yet Luke (unlike Matthew) chooses to draw attention to Jesus’ circumcision. Philip Alexander, rather curiously, suggests that little of Jesus’ Jewishness is to be seen in the stories of his birth, while George Brooke offers four texts from Qumran which help to show how a Second Temple Jew might have understood aspects of these accounts. He assumes that these texts from Qumran show what was possible for Second Temple Jews to believe, but he does not justify why he reads parts of the story of the birth of Jesus and associated narratives in the light of Qumran rather than vice versa. Barry Matlock, interacting with David Wenham, argues that there is no reason to attribute any belief in the virgin birth to Paul. He suggests that the silence of Mark (and Paul) on the subject, together with the apparent evidence of the lateness of the traditions in Matthew and in Luke raises the question of what Paul may have known of the human Jesus, and this lakes him into the wider Jesus-Paul debate.

Freed’s introduction to the infancy narratives takes a similar approach to that of Matlock. He concludes that the sum total of Paul’s evidence concerning the birth of Jesus is that he was born a Jew of a woman, possibly as a descendant of David. These too are the only facts of history that he will admit from the stories of Jesus birth in the Gospels: ‘The rest of the birth stories express religious truths and theological convictions of Matthew and Luke in beautiful and edifying legends, myths and poetry.’

This conclusion seems more definite than Freed’s discussion of the birth narratives might allow, however. He does note that there are elements common to the Matthean and Lukan narratives which means that each evangelist may have used an earlier source, but his belief (following Goulder) that Luke may have drawn on Matthew as well as on Mark also allows for the possibility that such common elements are due to Luke’s dependence on Matthew. Thus Freed sees the genesis of the Matthean infancy narrative in a defence against Jewish accusations that Jesus was illegitimate, although he accepts that it is difficult to tell what material Matthew acquired from earlier sources and what he added to them.

Freed’s historical conclusions are interwoven with (but perhaps not demanded by) his readings of the Matthean and Lukan narratives. He sets out to read them both as literary units that are complete in themselves, and also as integral parts of the Gospels of which they are parts. There are times when a firmer editorial hand might have improved the structure of the book and separated more clearly the discussions of Matthew and Luke, but the greatest strength of the discussion is the careful attention it pays to literary parallels within and between each account as well as between the two accounts and narratives in the Septuagint. Thus there is a synoptic comparison of the Matthean and Lukan accounts; of 1 Samuel 1–2 and Luke 1–2; and of Luke’s stories of John and Jesus. He also notes significant parallels between Luke and the Septuagint in his accounts of Zechariah and Elisabeth (cf. Abraham and Sarah), John the Baptist (cf. Samson) and the annunciation to Mary (cf. God’s promise to David through Nathan in 2 Samuel 7). Freed is strong on the use of the OT in both Matthew and Luke, although his discussion often includes the sub-text that accounts written in the light of earlier accounts of God’s activity reflect the composition of the evangelists rather than any basis in historical events.

Freed also includes useful discussions of most sections of the Matthean and Lukan narratives such as the identity and significance of the magi and the shepherds, although there were times when these discussions did seem too diffuse and in need of focus. There are many useful discussions in this book, and its modest size may make it more accessible to the students and interested church groups for whom the author writes than the longer work by Raymond Brown. The Birth of the Messiah. I tried to avoid making such a comparison, since Brown’s work is a magisterial treatment on another scale altogether, yet time and time again I found Freed wanting in the light of Brown’s study. The comparison may be unfair, but somehow it seems inevitable, and it may be the case that Brown remains the better book even for most undergraduates and some church groups. Certainly anyone wishing to take further the questions raised by Freed will turn to Brown, not least because Freed’s own discussion of controversial questions as well as his bibliography is disappointing. Most significant, perhaps, is the omission of any reference to authors who take a different view to his own on the question of the historicity of the virgin birth. In this respect, his failure to acknowledge different opinions on the problem posed by Luke’s reference to a census under Quirinius is particularly striking.

Themelios readers might well wish to look also at articles such as those of C.E.B. Cranfield (SJT 41 1998, now reprinted in his On Romans and Other Essays), I.H. Marshall (in Mary in Evangelical Perspective, ed. D.F. Wright) and B. Witherington III (‘Birth of Jesus’, in Dictionary of Jesus and the Gospels, ed. J.B. Green). Certainly there are serious historical questions to be asked about the beginnings of belief in the virginal conception, and about the nature of the event, but serious discussion requires interaction with those of differing views. Thus it is disappointing that both of these books, although stimulating in many ways, have no room for anyone to argue for a traditional understanding of the birth of Jesus.