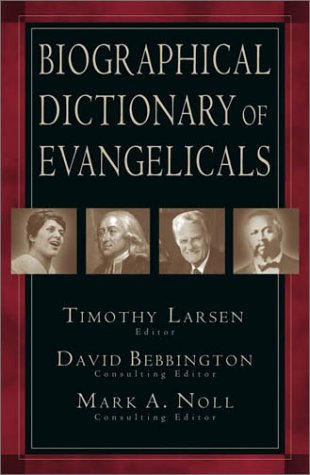 The Biographical Dictionary of Evangelicals contains biographies of more than four hundred prominent evangelicals. The definition of an ‘evangelical’ adopted followed Bebbington’s four crucial characteristics of evangelicalism, namely conversionism, activism, biblicism and crucicentrism, as defined in his book Evangelicalism in Modern Britain. The criteria for entry into this dictionary is that each figure has significantly influenced the wider evangelical community across denominational lines, with less emphasis on those whose ministry was contained primarily within denominational, ethnic, theological or regional subcultures.

It was decided not to restrict entry to people who had already died, but to include those who had a birth year of no later than 1935, that is individuals who will have passed the standard retirement age of 65 and on whose careers some perspective can be gained when assessing their achievements and reputations. In general terms the editor followed Bebbington’s judgement that it was the 1730s that launched the evangelical movement and therefore the vast majority of entries describe people who have lived in the eighteenth to the twentieth centuries. There were, though, exceptions to this rule. It was felt that the inclusion of a ‘pre-history’ of evangelical forbears would be useful as describe those people whose work had often shaped evangelical thought, and whose examples they had sought to follow. The earliest figure who had been chosen was John Wyclif. The most prominent evangelical forbears included were the Reformers and the Puritans whose influence on evangelicals has been profound, even if they did not fall into this category in a technical sense.

The geographical scope of the volume is the English-speaking world, which is largely restricted to the UK, the USA, Canada, Australia, New Zealand and South Africa. There were some figures included from was non-English-speaking countries, (for example, Merle D’Aubigne, 426–28), if their ministries or reputation had a significant bearing upon English-speaking evangelicals. The majority of individuals were ministers, theologians, evangelists, writers or missionaries, but there are some individuals from a variety of other professions who made a significant contribution to the evangelical movement, such as the former American Preident Jimmy Carter (126–28). There was no attempt to ‘balance’ the list in terms of gender or denominational identity. This dictionary was intended to record those individuals who were perceived as being the most influential within this particular ecclesiastical constituency.

This book is an excellent reference work that ought to be on the bookshelf of every reader of this magazine. The articles, written by specialists in their field, have been presented in such a way that they are very easy to read, but also provide a substantial amount of information that will be valued by scholars and general reader alike. Each article is accompanied by a short bibliography that is designed to point the reader towards a few of the most useful secondary sources that address the subject at greater length and also some primary sources, if they were autobiographical.

The only area over which readers may want to criticise this book is in the choice of those individuals who did not make the final shortlist. I have my own small list of people I would like to have seen included, but I struggled to determine who I would have left out if the total number of individuals could not have been increased. This is, therefore, a book warmly recommended to Themelios readers.