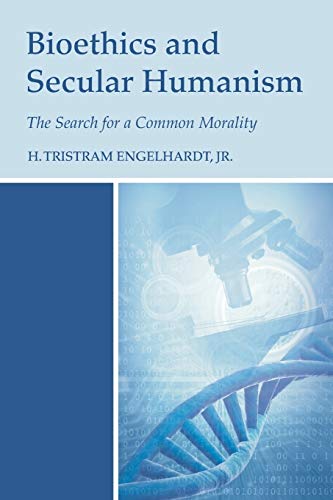 Bioethics and Secular Humanism: The Search for a Common Morality

Let not the title mislead. According to the author’s own confession: ‘This volume is meant as much to address the fundamental philosophical and cultural challenges of the postmodern age as to give an account of bioethics or to explore the significance of secular humanism’ (p. xi). The scope of this volume, along with the fact that it comes very highly commended by highly reputable scholars, makes it generally recommended reading.

The thesis that the author proposes is quite straightforward. The post-modern age in which we live is characterized by pluralism and fragmentation. There appears to be no common morality or commonly recognized moral authority. This is nowhere better illustrated than in the field of bioethics. Yet precisely here we must make moral decisions in a social and political context. Engelhardt proposes a secular humanism, but he makes careful distinctions in the notions of ‘secular’, ‘humanism’ and ‘secular humanism’ which make up a large part of the book. He does not advocate secular humanism as a non- or anti-religious philosophy. For the vacuum in moral authority that has come about first with the decline of Judaeo-Christianity is certainly not filled by some universal standard of rationality offered in contrast or opposition to religious claims. if ‘God is silent’, ‘reason is impotent’ too (p. 119). What we need is some method whereby the moral strangers that we are to each other can collaborate in a social enterprise. Most of the book is taken up expounding the dilemma and analysing the concepts. It is in the last chapter that Engelhardt offers his answer. What is it?

We need a morality based simply on our being human. There seems only one kind of morality that will do the trick and refuse to go beyond our sheer humanity: a morality that is focused on human consent. That is, we have an extreme individualist liberalism. Moral authority must come from the consent of the consenting. Where the relevant parties consent to surrogate motherhood, to take the most important example to which Engelhardt adverts, there we have the moral authority for surrogacy. Where there is no consent, we have no moral rights to impose. The only possible social underpinning for this is the philosophy of the free market. You can op tin or you can opt out: the market creates moral answers where they are needed yet not available elsewhere. This form of humanism is neither for nor against any contentful religious or moral philosophy. That is its strength and its virtue is its necessity.

Engelhardt’s work has many merits. Firstly, it is a clear piece of writing. Secondly, it is deeply serious in the sense that it conveys the sense of actually wanting to see a resolution to the social dilemma rather than just propounding another set of ideas. Thirdly, it contains very helpful distinctions between differing kinds of humanisms against a background of conscientious research. I think the general reader, including the student, should profit from all this. He arrives at his own solution remarkably late in the book so that one feels one is watching a fast bowler with an immensely long run-up, impressive at least until the point of delivery. But what are we to make of what he delivers?

Certainly this is an area where it is much easier to criticize than to carry off compelling positive arguments. And certainly one is aware of the reasons, both theological and non-theological, for combining personal moral conviction with strong liberalism in social philosophy. Notwithstanding this, Engelhardt’s conclusions are unacceptable and indeed dangerous. The reason for the failure of the argument can be given without bringing theology into it. Engelhardt’s case can only conceivably be valid if society is composed only of consenting adults. But it is not. I may object to surrogate motherhood and to abortion on the grounds that these constitute a violation of the rights of the embryo. In Engelhardt’s society, the embryo can have no rights in this matter. But why should that position be socially accepted? How can he claim that his social philosophy is morally neutral in this matter? Why should his insistence on the rights of the consenting individual or consenting individuals to carry out a certain project take precedence over my conviction that non-consenting individuals have rights? One could indeed go beyond the sphere of human rights to animal rights with the same results.

Engelhardt’s proposal is just a further instance of the failure of liberalism as a social philosophy to show that freedom rooted in adult choices should be the foundational element in social theory. It is certainly our urgent task to offer an alternative contribution embracing a theological perspective.