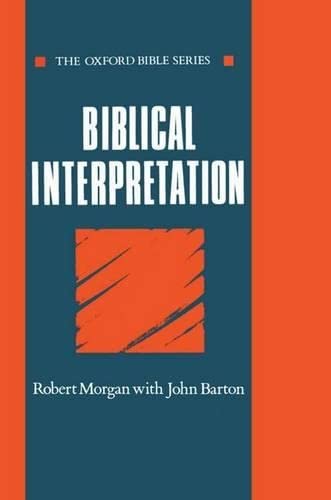 This book forms one of three general volumes in the new ‘Oxford Bible Series’, edited by Peter Ackroyd and Graham Stanton. This is a series aimed particularly at sixth-formers, with the idea of providing overviews of the Bible and biblical scholarship by treating categories of biblical literature, rather than individual books. This volume is foundational to the whole series (although each is supposed to be independent of the others).

The ‘sixth-former’ in this case will have to be intellectually and theologically on the ball. This is a demanding book, hardly one for beginners. Started as a joint OT–NT project, with an author from each speciality, it has ended up largely the work of Robert Morgan, with some occasional OT input from John Barton. The reason for this change of direction is hinted at in the Preface, and becomes clearer as the book progresses: instead of contenting himself with a general survey of the history of biblical interpretation and of ‘options’ for interpretation today, Robert Morgan has given us something of an individual cri de coeur. This makes the book much more valuable.

His thesis is compelling, and biblical scholarship is going to have to respond. In fact, it has already begun to do so, in that a major session at the British SNTS gathering in Bristol in September 1989 was devoted to the book, with critiques by Tony Thiselton and Francis Watson and a response from the author himself. In essence, the argument of the book is this:

(1) We must give up the pretence of an ‘objective’ biblical scholarship focusing on historical questions. This is a pretence, because biblical scholars have almost always been religiously motivated, and their religion has played a powerful role in shaping their scholarship. In the case of the leading German liberals of the last 200 years, this religion has been one which enabled them to say very radical things about the Bible without disturbing their own commitment—but the ‘theory of religion and reality’ from which they lived was no less important for them and their scholarship than for the conservatives who were horrified by their proposals.

(2) The fact that biblical scholarship has focused on historical questions for 200 years now must be put into right perspective. Reimarus (1694–1768) put historical questions on the agenda by arguing that the appearance of Israel and of Christianity could be explained entirely on rational, humanistic grounds. Since then, scholarship has been taken up with historical issues, because it has generally been accepted (following Reimarus) that the application of reason to the Scriptures is quite in order—but does reason really lead to Reimarus’ conclusions? Yet, even though history has been at the top of the agenda, Morgan argues that the essence of the response to Reimarus has been to forge ‘a theory of religion and reality’ which can incorporate into itself this rational approach to the Scriptures while still valuing them religiously. The actual theories adopted by a Baur, a Bultmann or a Barth differ greatly—but in each case it is the theory, rather than the historical study, which has been the driving force.

(3) This being the case, we must recognize the power of the interpreter in the process of interpretation. He or she shapes the study according to his or her own aims—and this is not just inevitable, but right. ‘Speakers and writers have some short-term moral right to be understood as they intended … but that right dies with them or with the occasions for which the utterance was intended … Without the source or author there would be no power, but once it is released all this power resides in the hands or minds of the interpreters, i.e. readers who determine the meaning of what they are reading’ (p. 270). The emphasis on a historical approach to the Bible has arisen from the interest of its interpreters—but other emphases are just as valid if interpreters have other concerns.

(4) This means that Morgan is warm towards the recent application of sociological theories to the Bible, and the adoption of more literary, less historical approaches. He insists that the theory is the vital thing. It would be possible simply to add a few more methods (‘rhetorical criticism’, ‘discourse analysis’) to the armoury of biblical scholarship, but this would be to miss the point of the exercise: for simply by adopting the methods, we are (whether we like it or not) making a statement about the nature of human beings and the cognitive processes by which we interact with the world. And that is in fact the game we are playing, if we are basically interested in the Bible for religious reasons. The Bible gives us our world-view, and we must be conscious about it.

A brief review does not permit a proper engagement with an argument of this power and erudition. However a few comments may be made:

(1) The quotation above from p. 270 is misleading, in that he is careful not to open the flood-gates to ‘anything goes’, whatever-takes-your-fancy styles of interpretation. However, the effect of his argument is to reduce the importance of an historical engagement with the Bible. At the Bristol debate, Francis Watson questioned whether an historical interest really entered biblical scholarship only in response to the rationalist challenge, and it would certainly seem to me that one of the distinctive features of the theology of the Reformers was their incorporation into their approach to the Bible of a sense of historical distance, to which the whole movement of modern critical study owes its origin. We cannot get away from the fact that that sense of history is built into our world-view and so embraces our approach to the Bible (here we may contrast the attitude to the Qu’ran in Islam). So I would want to underline, perhaps more than Morgan does, the insistence that no true biblical scholarship can be ahistorical, simply because of the nature of biblical faith. All Christian faith involves relation to Jesus of Nazareth, a figure of history.

Morgan accepted Watson’s comment in his response to the debate, although I have a feeling he could come back at me and remark that, by emphasizing a historical approach in contrast to the attitude of Moslems to the Qu’ran, I am simply revealing the ‘theory of religion and reality’ that makes me tick!

(2) He does not tackle sufficiently (to my mind) the problem posed by the self-assertion of the interpreter. From one perspective it is of course true that we cannot help being ourselves, and that we use what we are and what we want as interpretative tools and guides. But Christianity has always insisted that the Bible exercises an authority over the church and its teachers. How can the teachers consciously distance themselves from their own concerns while, at the same time, making their concerns a basis and starting-point in their scholarship? Perhaps the fact that Morgan does not tackle this question is related to his failure to ‘come clean’ about his own ‘theory of religion and reality’. We need an autobiographical element in a book which emphasizes so much the rôle of the interpreter in shaping the ‘meaning’ of the text.

(3) A substantial point made by Tony Thiselton follows on from this. Robert Morgan commends a more ‘literary’ approach without exploring how this might actually work in practice. Literary responses are essentially individual: but Christians are not. How can we guard against the break-up of the ‘community of faith’?

With Thiselton, I want to underline this. We cannot get away from the fact that, as Christians, we belong to a community. And in fact this is never more obvious to us than when we engage in biblical interpretation. The fellowship we express in common worship and service is also expressed in thoughtful interaction with minds of the present and of the past, in a common wrestling with the Scriptures. We cannot disassociate ourselves from them (though we may disagree with them)—yet if they are to come into the picture, we must qualify the place and force of our own ‘literary’ response to the text.

In his response, Robert Morgan substantially accepted Tony Thiselton’s criticism, recognizing that he simply had not had the space to develop his theme in this direction.

Having made these three tentative criticisms, however, I want to identify myself with this book. I empathize with his cri de coeur, and believe he is right in his basic thesis. Evangelical scholarship needs to hear what he says and to come to terms with it. Some evangelical scholars have reacted against the new ‘literary’ approaches to the Bible simply because they sit loose to historical criticism as we have learned to practise it in the last 100 years. See, for instance, the evaluation by Scott McKnight in his Interpreting the Synoptic Gospels(Baker, 1988), pp. 121–137. I am cautious about this negative reaction, because the technical tools of modern historical criticism have only been available for a few years (comparatively), and are not available today to the vast majority of Christians who nonetheless nourish themselves truly by the Scriptures. We need to beware of taking the Bible out of their hands by making it the proper preserve of those with the technical tools of interpretation at their disposal. That is the way of Gnosticism. We certainly need to be able to check our intuitions about the meaning of the Bible, but these are in fact checked as much by fellowship with other Christians (both present and past) as by careful historical engagement with the biblical text.

Chapters 2 to 5 contain a fascinating survey of biblical scholarship since Reimarus, chapters 1 and 6 give the essence of Morgan’s argument, chapter 7 (66 pages) surveys and evaluates the application of literary approaches to the Bible, and chapter 8 summarizes and draws conclusions. I wish the contents page gave more of an idea of the actual thrust of the book—his headings are anodyne in comparison with the real vigour of his argument. Each chapter contains a list of ‘Further Reading’ (full), and there is a fascinating ‘Annotated Index of Names’ (pp. 297–335) which gives pithy information and sidelights on the main figures discussed and will prove generally useful as a basic Who’s-Who of biblical scholarship. (Did you know that Hengstenberg also wrote on freemasonry and duelling?)

We must not ignore this book—it sets an agenda for evangelical scholarship.