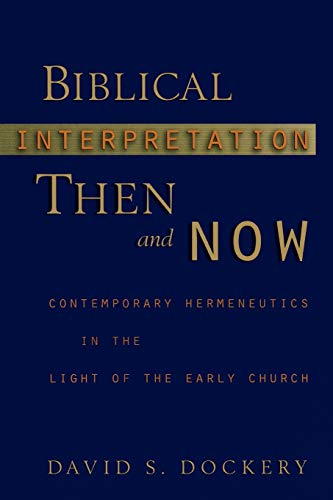 Biblical Interpretation Then and Now: Contemporary Hermeneutics in the Light of the Early Church

Moisés Silva wrote a book called Has the Church Misread the Bible?. David Dockery sets out to answer that question, not with a straight ‘yes’ or ‘no’, but with a nuanced evaluation which appreciates the contribution of every person he discusses.

Dockery’s goal is to look at patristic hermeneutics and use that to explore issues in contemporary hermeneutics. Nowhere is the survey approach more unsettling than in the first chapter on the hermeneutic of the NT. In a mere 21 pages he covers the hermeneutic options found in first-century Judaism, Jesus, Paul, and the rest of the NT, including Hebrews.

Dockery sees a ‘functional’ hermeneutic in the Apostolic Fathers, an ‘authoritative’ one in the apologists, a ‘reader-centered’ hermeneutic in the allegory of Alexandria, an ‘author’ perspective in Antioch, and a ‘text’ perspective in Augustine. After these have been developed and critiqued, they are compared with more modern positions, Schleiermacher, existential hermeneutics (especially Bultmann), Hirsch and Ricoeur. Two things should be noted about this section. First, while the Middle Ages get a couple of pages, the Reformation gets a single paragraph. Surprising as this is, Dockery is probably correct in doing so, for the Reformation picks from strands in the Fathers rather than introducing something entirely new. Second, the material in this section is the most difficult reading in the book. At the same time, it is nowhere near as difficult as most of the more detailed works on these topics.

When it comes to evaluating this book, our initial observation is that it is unique. First, it is unique in that it appreciates all of these interpreters. While Dockery critiques every one of those he discusses, he does so appreciatively. Each of them is viewed as wrestling with real issues which needed to be addressed. Each of them is seen as honest in his or her work. Each of them is presented as an example to learn from. None of them is absolutely a wrong road. This catholic appreciation in an evangelical scholar is refreshing.

Second, Dockery is even-handed in the people he selects. Schleiermacher is here, but so is the American evangelical Walter Kaiser. Bultmann is here, but so is the Canadian evangelical Richard Longenecker. In other words, we discover the full range of hermeneutic scholarship, mainline and evangelical. Neither side is rejected out of hand; neither side is given short shrift. For evangelicals, who need to see the whole scope of scholarship, this is an invaluable service. It is also an excellent example.

Third, Dockery avoids being drawn into any camp. He does not believe that the author’s intention is the full story of interpretation, but he does believe that we have to start there and give it primacy. He sees value in the hermeneutics which focus on the reader, such as allegorical approaches, yet he also sees their weaknesses. He is probably least sympathetic to the existential school, yet even there he sees a parallel with concerns for relevance in the early church. He is most happy with text-oriented types of hermeneutic precisely because they are not ‘pure types’—they do not fit entirely in any camp.

Still, this work does have its weaknesses. First, it is not free of bias. For example, while Dockery rightly points out that the reading and exposition of Scripture had an important place in the worship of the early church, this reviewer believes that his Baptist presuppositions show when he looks at it as the central function of the worship service. I doubt that anyone before the Reformation would have called Scripture teaching central; for in the whole church from the first to the 16th century universally and in large parts of the church since then the Eucharistic celebration, or Lord’s Supper, not the sermon, was the central focus of worship.

Second, as noted above, this work is a survey. While this is integral to his methodology, one wonders at times if the survey is not too brief. Has he really done justice to NT exegesis? In other words, has he really developed his standard of comparison enough? This question is raised over and over again, not so much in the patristic material (although occasionally there as well), but certainly in the Reformation and post-Reformation material.

Still, all in all, this is a good book. It is also generally readable (although occasionally he shows his grasp of a wide vocabulary which will confuse some readers). If you want to read a work which does equal justice to the full range of interpreters, including evangelicals, and if you want to examine the relevance of the first centuries of interpretation for today, this is certainly the work to start with. You may want to read some of the more detailed studies later, but starting with this work will give you an engaging orientation to the field, and for many it may just be all they need to read.