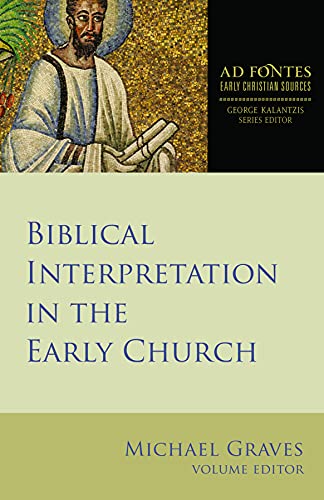 Biblical Interpretation in the Early Church

Ad fontes! This was the call of the Renaissance humanists, and later the Protestant Reformation, to go back “to the sources.” With this call came a renewed emphasis on the study of Greek and Latin classics, as well as the Christian Scriptures in the original languages. Additionally, this brought about renewed interest in the early voices of Christian history: the Greek and Latin texts of the church fathers. According to the series editor George Kalantzis (Professor of Theology, Wheaton College), the goal of the Ad Fontes series is “to invite readers ‘to return to the sources,’ to discover firsthand the riches of the common Christian tradition and to gain a deeper understanding of the faith and practices of early Christianity” (p. viii). In this volume, Michael Graves (Armerding Professor of Biblical Studies at Wheaton College) seeks to “provide a useful survey of early Christian interpretation of Scripture through primary sources” (p. xi). Graves’s entry to this series includes selections from fifteen sources, ranging from the second through the fifth centuries, in order to provide readers with an introduction to the theory and practice of early Christian biblical interpretation. The reasoning behind the selection of texts is both to “illustrate major features of Christian exegesis, such as christological typology, proofs from prophecy, appeal to the Rule of Faith, salvation-historical paradigms, and use of Scripture to refute heresy” (pp. xi–xii) and to “articulate coherent ideas about how to interpret Scripture and also treat specific biblical texts with enough detail to show how the theoretical ideas work in practice” (p xii). Thus, Graves illuminates the past for the purpose of helping modern readers to better interpret Scripture for today and the future.

The book begins with an introduction to early Christian interpretation, defining and elaborating the early Christian understanding of the literal and spiritual senses of Scripture. The remainder of the book consists of selection from fifteen different authors in the early Christian period. Leading up to the third century, Graves provides selections from the Epistle of Barnabas, Justin Martyr, Irenaeus, Tertullian, and Cyprian. The later selections include works from Origen, Eusebius of Caesarea, Ephrem the Syrian, Diodore of Tarsus, Gregory of Nyssa, Jerome, Theodore of Mopsuestia, John Chrysostom, Augustine, and John Cassian. Graves gives a historical overview of each figure, including how each provides helpful insight into understanding early Christian interpretation. The remainder of each chapter is made up of primary source selections. While Graves mostly provides reading from a single work for each given author, the chapter on Origen includes selections from multiple works.

This is a good resource for those wishing to begin their studies in understanding early Christian biblical interpretation. For the novice, each section provides a different facet of early Christian interpretation, including its theological and practical function. Graves provides a wide range of sources, and his insights help readers advance in their knowledge of early Christian interpretive practices. Even those who have some experience in this area may find something new and helpful given the diverse group of figures examined in this text.

With that said, it is up to the reader to take up Graves’s challenge to “facilitate historically informed critical reflection on early Christian biblical interpretation and so provide a useful resource for contemporary theology” (p. xxix). He does not simply spoon feed his audience but sets the table so that readers may decide where and in what ways to enjoy the feast. With this in mind, some may feel that Graves’s selection of texts is too limited and consider his historical overview and interpretive comments too brief and cursory. If this is the case, then such readers should look to more specialized texts on early Christian biblical interpretation focusing on specific figures or topics. Based on the book’s stated purpose and scope, Graves accomplishes his task of introducing readers who are unfamiliar to this area by providing prominent texts and figures to consider. Thus, it should be seen as a primer and not an encyclopedia.