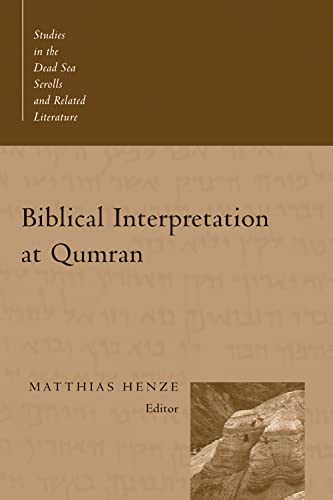 This volume contains various essays which were originally presented at a conference titled: ‘The Dead Sea Scrolls: The Bible and Biblical Interpretation at Qumran’, held at Rice University (Texas) in February 2001. Among the authors of the volume are many who have previously made significant contributions to the study of the Dead Sea Scrolls including John J. Collins, George Brooks, Peter Flint, James Vanderkam, Shani Berrin, Michael Segal and Moshe Bernstein. As it stands, this book contains the most recent discussions of several significant issues regarding Biblical interpretation in the Scrolls.

Various topics are covered in the book. Some essays are specific studies focusing on a slim corpus of literature or more narrow themes throughout the Scrolls: for instance, Vanderkam’s essay, ‘Sinai Revisited’, which proposes a provocative thesis regarding the Community’s ideological attraction to the Sinai event, is limited to 1QS. Likewise, Monica Brady’s essay, ‘Biblical Interpretation in the “Pseudo-Ezekiel” Fragments (4Q383–391) from Cave Four’ are just that: an analysis confined to the use of Scripture in these documents. Other studies are more general in character. George Brooke’s essay, ‘Thematic Commentaries on Prophetic Scriptures’ covers a wide range of documents in the Scrolls as does the article by Moshe Bernstein and Shlomo Koyfman (‘The Interpretation of Biblical Law in the Dead Sea Scrolls: Forms and Methods’). In light of this, the book succeeds in covering a variety of different topics through both specific and general studies.

The book is especially helpful regarding two matters. First, it provides the reader with the most up-to-date analysis of Qumran methods and forms of exegesis. This topic has elicited are plethora of scholarly literature that tends to overwhelm the student or scholar who is attempting to investigate this topic. Biblical Interpretation at Qumran Contains not only many articles that survey the field, but also a current bibliography (both in the notes and at the end of the book) that allow the student to read further. Secondly, the article by Shani Berrin on ‘Qumran Pesherim’ is especially helpful in bringing a particularly long and difficult discussion concerning the term ‘Pesher’ up to date. Berrin’s article contains a massive bibliography in the footnotes (most pages have more notes than text) which, though at times wearying to the reader, provides the student with everything they ever wanted to know about Qumran Pesherim. If there is something written on the subject, Berrin has read it and summarized it well.

The only drawback that is worthy of mention is the length of the Introduction and the absence of any real conclusion. I would have liked to have seen a book titled Biblical Interpretation at Qumran contain a more detailed discussion concerning the current state of affairs. With the amount of ink that has been spilt on the subject, its seems prudent to my mind to have stretched out the Introduction (it is only 9 pages) to summarize and introduce the many issues involved in this subject. M. Henze attempted to do this but (perhaps due to editorial agreements) he limited his discussion to only a few pages. A conclusion would have been nice as well. Nevertheless, the book is a must read for anyone wishing to delve into this difficult subject.