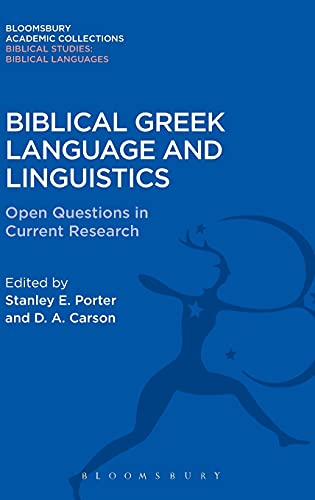 This book consists of two groups of four papers each, presented to meetings of the Society of Biblical Literature in 1990 and 1991, together with introductions by the editors. The first group, introduced by Carson, is concerned with verbal aspect; the second, introduced by Porter, with other topics.

Prominent within the first group is what one might call a rematch between Porter and Buist M. Fanning, following Porter’s monumental Verbal Aspect in the Greek of the New Testament, with Reference to Tense and Mood (1989) and Fanning’s only relatively slighter Verbal Aspect in New Testament Greek (1990). In his introduction, Carson describes as ‘stunning’ the level of agreement between the two, whose research was carried out quite independently. In particular, for both scholars, ‘verbal aspect is concerned with the “viewpoint” of the author toward the event represented by the verb’ (p. 21), rather than ‘the kind of event to which reference is being made (Aktionsart)’ (p. 22). Underlying differences of approach (Porter’s being on the whole more theoretical and deductive, Fanning’s more practical and inductive) and reciprocal accusations of misrepresentation, the ‘issue between them’ is that for Porter, ‘aspect and only aspect is grammaticalized in the tense-forms of Greek, in all moods’, whereas ‘Fanning sharply distinguishes aspect from Aktionsart at the theoretical level, but holds that the actual semantic freight carried by any particular verbal form depends on complex interaction with lexis (the basic semantic range of the verb in question), context, temporal structures and much more’ (pp. 22f.).

After Porter and Fanning have been allowed to speak for themselves, Daryl D. Schmidt and Moisés Silva offer extended reviews of the two books in question. Schmidt concludes that ‘it would be a significant combined contribution to the study of Greek grammar if the clear distinction between aspect and Aktionsartcould now be accepted as clearly established, and furthermore, that the core of aspect is the contrast between present and aorist’ (p. 72); he adds a wise caveat against speaking too easily of viewpoint as a speaker’s conscious choice. Silva is moderately critical of both Porter and Fanning, commenting inter aliathat ‘both authors fail to address directly and solve the biggest conundrum of all: how does one distinguish between the information conveyed by the aspect itself and the information conveyed by the context as a whole?’. He is ‘not at all persuaded by either of them’ (p. 81), and pessimistically concludes that ‘exegetes and pastors are well advised to say as little as possible about aspect’ (p. 82).

Within the second group of papers, Jeffrey T. Reed refreshingly shifts attention from the author to the addressee of 1 Timothy. It would be unfair to quote in isolation his final sentence: ‘[Timothy] is the intended recipient of the letter.’ The point is that, through careful discourse analysis, Timothy is revealed as ‘the unifying thread which binds the letter into a cohesive unit’ (p. 118); other participants (notably those implied by the unique humōn of 6:21) are secondary or indirect. Reed’s paper is enlivened with contemporary illustrations.

The following contribution, by Paul Danove, a disciple of C.J. Fillmore, is entitled ‘The Theory of Construction Grammar and its Application to New Testament Greek’. It is devoted to an analysis of transitive occurrences of akouō, and of uses of oida, and is accompanied by an appendix, almost as long as the article itself, classifying relevant NT occurrences. The practical outcome of Danove’s discussion is, first, to suggest criteria for the translation of akouō as ‘obey, heed, listen to’ or alternatively ‘hear’; and, second, to support the UBS text D reading pantes in 1 John 2:20 as being in harmony with the writer’s distinctive style.

Micheal (sic) Palmer’s ‘How Do We Know a Phrase is a Phrase?’ produced frustration in at least one reader: first, because he describes as a ‘verb phrase’ what I was taught to call a clause; second, because he devotes a good deal of space to explaining why single nouns should often be described as noun phrases; and third, because in the end he acknowledges that ‘there may sometimes be multiple hypotheses which account equally well for the available data’ (p. 186).

Finally, Mark S. Krause offers a workman-like discussion of ‘The Finite Verb with Cognate Participle in the New Testament’, paying particular attention to the Septuagintal intensive function of this construction, and recommending that it be translated accordingly, for example:

Certainly I shall bless you tremendously, And I shall multiply you prolifically