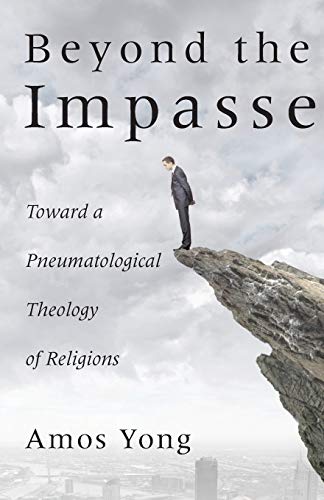 BEYOND THE IMPASSE: TOWARD A PNEUMATOLOGICAL THEOLOGY OF RELIGIONS

The contemporary importance of constructing a Christian theology of religions hardly needs arguing. And British pastor who asks his congregation to indicate if they live near, work or study beside people of other faiths, or who have relatives married to them, is likely to see a forest of hands raised in response.

Amos Yong was born in Malaysia, from which the family moved to USA, where he had his theological education. His parents were Pentecostal Christians converted to Christ from Theravada Buddhism, but he also received such values as respect for elders and the importance of a balanced life from the Taoist-Confucian-Buddhist culture. Clark Pinnock’s work has stimulated him, although he is not in complete agreement with him. These varied elements may be clearly seen in his book. He makes very little reference to Islam, the religion most encountered in Britain, but as his aim is to construct a theology of religions in general this does not reduce his book’s relevance to the British situation too much.

His pneumatological methodology contrasts strongly with approaches to a theology of religions through Christology or the Trinity. An example of a Trinitarian approach is Mark Heim’s The Depth of the Riches: a Trinitarian Theology of Religious Ends, reviewed in the Autumn 2002 edition of this journal. Yong’s book consists of seven chapters. All except the first and the last started life elsewhere in journals or as academic papers, but they cohere well.

He makes his theological stance quite clear, saying he is committed to the authority of Scripture, the importance of a personal relationship with Jesus as mediated by the Spirit, and the task of Christian mission and evangelism. To cast the religious net as widely as he can, he adopts Paul Tillich’s broad definition of religion as ‘ultimate concern’. After describing exclusivism, inclusivism and pluralism, he says:

I am close to the inclusivist position that affirms the ontological normativity of Christ for salvation without insisting that persons who have never heard the gospel or verbally confess Christ have absolutely no hope of this great salvation.

In addition to expounding his own view he engages with those of Gelpi, Knitter, Ghodr, Samartha, Dupois and, especially, of Clark Pinnock. An important feature is his discussion of the discerning of spirits, which he believes very important and which can be taken into religious spheres beyond that of the charismatic manifestations dealt with in 1 Corinthians.

Here there is much close theological reasoning, but there are significant weaknesses in his attempt to find Biblical justification for his approach. The passages in the NT he mentions or discusses more than twice are John 1:9 and 3:8, Acts 2:17; 10:34–35 and 17:28, all of which are important for the subject, yet their exegetical treatment is thin and lacks any significant consideration of other interpretations. Accordingly it is not clear that there is NT evidence for a saving work of the Spirit outside the sphere of the proclaimed gospel of Christ. Moreover, the chapter on discernment, stimulating as it is, does not adequately consider how the context of the passages on discernment in 1 Corinthians affects their interpretation.

This is a learned and thought-provoking attempt to substitute a Pneumatological for a Christological or Trinitarian approach to a theology of religions, but I remain unconvinced.

Incidentally, if ‘Christological’ and ‘Trinitarian’ are given an initial capital, should not this be the case also with ‘Pneumatological’? His book always uses lower case for this world except in headings.