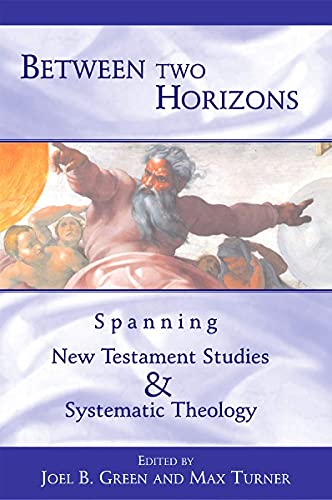 It has long been a tacit assumption that biblical studies and systematic theology should be kept well away from each other. The most famous admission of this was by G.E. Lessing, the eighteenth century German polymath, who talked of the ‘ugly ditch’ between historical study into the NT and the study of Christian dogmatics. N.T. Wright offers a statement in his essay in Between Two Horizons that actually functions as a nice summary of the whole book: ‘This task is not to be thought of as one element in the wider project of bridging Lessing’s Ugly Ditch. Such a project presupposes that which ought to be challenged—namely, the existence of such a ditch in the first place’ (206).

This book is in part a trailer and introduction to a new NT commentary series, with the distinctive contribution of showing how NT exegesis impacts on contemporary theological thinking: a refreshing change from the purely historical emphasis that has dominated for so long. Between Two Horizons consists of eleven essays, chiefly by contributors to the commentary series, outlining creative ways of thinking about traditional concepts such as the unity of biblical studies and systematics (Joel Green and Max Turner), and the canon and the rule of faith (Robert W. Wall). There is a case-study in the role of Pentecostal tradition in interpretation (John C. Thomas) and a case-study in the interpretation of a biblical book (Galatians, by N.T. Wright). Stephen Fowl has a chapter on authorial intent, John Goldingay on narrative, Steve Motyer on the unity of the testaments and Trevor Hart provides a very interesting piece on tradition and authority. The authors share some key assumptions that give this book a common aim: suspicion about ‘the existence of such a ditch’ (see especially the important essay by Joel Green), a concern (in varying degrees) with the recovery of authorial intent as a part of meaning, a concern (again, in varying degrees) with a high view of Scripture, and a commitment to the unity of Old and New Testaments. However, there are also differences: Max Turner (whose essay is the best in the collection) has more confidence in speech-act theory (47) than Stephen Fowl (76–77); Steve Motyer sees trajectories (which in the Bible ‘have a point of origin, a high point, and a point of touchdown’; 159) as superior to ‘typology’ (which is fundamental to Wall’s essay; 178). There are also various positions taken on the relationship between authorial intent and meaning. This is one case where the plurality of views becomes quite bewildering, and the repetition of the subject matter somewhat frustrating.

The importance of this book certainly lies in the challenge it lays down to most historical-critical NT scholarship in terms of its relationship to systematic theology. Unfortunately however there is surprisingly little discussion about actual systematic-theological method. The essays by Hart, Wright and Goldingay do deal with this issue, though Goldingay almost seems to solve the problem of Lessing’s ditch by doing away with systematics. His comments, such as ‘for all its truth and fruitfulness, the doctrine of the Trinity seriously skews our theological reading of Scripture’ (131) and his attribution of so much of traditional orthodoxy to Greek or Enlightenment thought is depressing. What is sadder is his pessimism about whether ‘Christian doctrine and lifestyles might be shaped by Scripture … I do not have great expectation that this will ever happen’. And worst of all is his solution: ‘If it is to do so, however, of key importance will be not the reading of scriptural narrative in the light of what we know already and how we live already, but the reading of scriptural narrative through the eyes of people such as Jack Miles and Jon Levenson who do not believe what we believe or do not practise what we practise’. Not only does this confer enormous importance on the role of unbelieving interpreters, but it also creates (or validates) a scholarly guild that has the time to read sceptical interpreters as the only ones who will be able to really understand and obey the Bible. Fortunately this kind of reflection is not widely distributed in Between Two Horizons. There are, however, occasional hints of unevenness in the attitudes to Scripture: with some authors, the OT is in danger of sounding like it is not primarily about Jesus (for instance 178). Or again, in some places, the theological diversity within Scripture is exaggerated: for example, the Pauline and Catholic epistles (especially James) are ‘better focused not in agreement, but in disagreement’ (Wall, 181).

Despite numerous problems, however, the editors are to be commended for their courageous overtures in attacking the validity of the ‘Ugly Ditch’, or as Joel Green (32) puts it, in tearing down ‘the architectural and engineering ventures whose product is the “iron curtain” separating biblical studies and theological studies’.