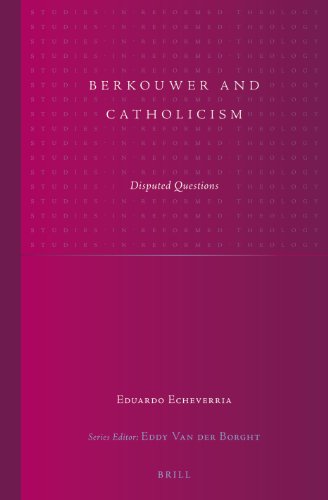 This ecumenical theological dialogue is moderated in a way that provides a nuanced example of a kind of Protestant-Catholic rapprochement. We will introduce the participants, briefly outline the content, and describe some prospects for further dialogue.

The first conversation partner is Gerrit Cornelis Berkouwer (1903–1996), a Dutch Reformed theologian who taught Dogmatics at the Free University of Amsterdam from 1945–1974. His thinking was rooted in the theology of Abraham Kuyper (1837–1920) and Herman Bavinck (1854–1921) and the philosophy of Herman Dooyeweerd (1894–1977). Berkouwer’s lifelong preoccupation with Roman Catholicism yielded more than seven scholarly works on various aspects of its dogma and practice. Berkouwer was an official observer at Vatican II (1962–1965), to which he devoted two book-length studies.

The second conversation partner is the Roman Catholic Church through papal encyclicals and other documents.

The moderator, Eduardo Echeverria, is a son of the Roman Catholic Church. The author graduated from Trinity Christian College (Palos Heights, IL), with a philosophy major and a thorough acquaintance with neo-Calvinism through its leading thinkers. He went on to study at the Free University of Amsterdam, earning his doctorate in philosophy. Echeverria is a professor of philosophy and theology at the Sacred Heart Major Seminary (Detroit, MI), and is a self-described evangelical Catholic.

The book’s general thesis is that “Berkouwer’s ecumenical engagement with Catholicism raises the fundamental question of what is an evangelical, catholic, and orthodox theology of the faith of the Church. This book is . . . a historical theological study of Berkouwer’s changing theological assessment of Roman Catholicism, especially with regard to Scripture and tradition, doctrinal development, Marian doctrine, and the relationship between the ecclesiastical magisterium and theologians” (p. 12, italics original).

First, we learn about the influence upon Berkouwer of Catholic nouvelle théologie, which, under John XXIII and Vatican II, promulgated the distinction between truth and its formulation. It was Berkouwer’s commitment to a “hierarchy of truths” that enabled him to challenge significant differences between the Catholic and Protestant traditions while affirming their degree of unity with respect to the foundation or center of the Christian faith. The moderator also guides a discussion between Berkouwer and Vatican I regarding the twofold order of knowledge of faith and reason (duplex ordo cognitionis).

Foundational to the dialogue was Berkouwer’s reconfigured view of sola Scriptura. Rather than pit Scripture against tradition or the church, he sought to understand how Scripture, tradition, and the church’s teaching office are intrinsically and necessarily related in theological interpretation. Who speaks for the whole church in the name of the church? Berkouwer helps us move beyond the impasse of “either the Bible or the church [as] the final authority” (the principle of sola Scriptura is neither anti-tradition nor anti-ecclesiastical). But his fatal mistake, according to Echeverria, lay in failing to affirm the Church’s teaching office in its role as interpreter of Scripture. This flaw flows from his unclarity about the nature and status of propositional truth, and his protest against epistemological objectivism. Both of these prevent him from accounting satisfactorily “for the universal, objective, perduring, and materially identical teaching of the historic Christian faith and thought” (p. 393).

The heart of this study involves the theme of doctrinal development, which entails the relation between truth and history, doctrinal continuity and discontinuity, and authentic and inauthentic development. The central issue is the relationship between the unchangeability of the truth of dogma and the historical conditionedness of its formulations. Authentic doctrinal development involves “noetic progress”—progress not in revelation, but in our understanding of revelation. Echeverria observes that Berkouwer failed to provide an adequate account of the substantial identity of dogma over time (pp. 470–71). This failure, we would observe, was not incidental but systemic in Berkouwer’s new phase.

This volume shows clearly that both Protestants and Roman Catholics face (or ought to face) the same challenges of triangulating the authority of Scripture, of tradition (confessions), and of the church. Protestants should acknowledge that the Reformation’s sola Scriptura never entailed the rejection of ecclesiastical (authoritative) tradition/confession. In some sense Jesus Christ has entrusted to the church (and therefore not to the individual believer) the authority to formulate doctrine in expressions that function as the normed norm (norma normata).

Protestants should become personally informed about changes within Roman Catholicism flowing from Vatican II. Cultural threats confronting Christians in the secularized West compel Protestants and Roman Catholics to lock arms, even if they don’t hold hands. Shedding stereotypes is a necessary prelude to conquering the tribalism on both sides that fails to respect the “other” who has become our fellow traveler.

To apprehend this conversation accurately, however, requires knowing that Berkouwer’s altered theological positions, including his reassessment of Roman Catholicism, were confronted and critiqued vigorously by his Reformed contemporaries, both in The Netherlands and in North America. One theological sympathizer, Hendrikus Berkhof, observed that Berkouwer’s thinking was in constant motion, and his method shifted along with his thinking, from (1) an initial commitment to the absolute authority of Scripture, to (2) a focus on the redemptive content of Scripture, and finally to (3) a focus on the existential intent of Scripture.

Berkouwer’s shift was rooted not in his theological assumptions regarding ecclesiology or the nature of dogma, but in his revised doctrine of Scripture. This is relevant for two reasons, involving first the book’s thesis and then prospects for future ecumenical dialogue.

First, Berkouwer’s theological shift facilitated the very rapprochement being celebrated in this book. His openness to the “form/content problematic” in his doctrine of Scripture (specifically, in his views of organic inspiration and infallibility) served to open the way for his conversation with the heirs of Vatican II. Listening competently, then, to this historical-doctrinal conversation requires readers to be familiar with the substantive critiques of Berkouwer’s theological shift furnished by theologians in his own tradition. These include the penetrating (Afrikaans) study by F.W. Buytendach (Amsterdam: Bolland, 1972) and the analysis by one of Berkouwer’s own students, Carl W. Bogue, A Hole in the Dike (Cherry Hill, NJ: Mack, 1977). Bogue criticizes the very feature of Berkouwer’s theology that lies at the heart of this volume: “The form-content distinction provides Berkouwer with a ready-made vehicle for ecumenical dialogue where ‘hang-ups’ with past formulations may be politely set aside to clear the way for ‘fresh’ insights on old problems. Nowhere has this been more visible than in Berkouwer’s discussions with and about Roman Catholic theologians” (pp. 8–9).

The second reason why readers must evaluate Berkouwer’s altered doctrine of Scripture suggests a way forward. Echeverria concludes with an invitation to travel the road paved by Berkouwer’s writings, “so as to come to ecumenical partnership with the Catholic Church in the search for full communion” (p. 488). This is somewhat confusing, however, in light of the author’s earlier, rather far-reaching judgment that “Berkouwer’s dogmatics, especially evident in his criticism of natural theology, his understanding of faith and reason in the Catholic tradition, suffers from the weakness of abandoning the scholastic tradition” (p. 12). This abandonment included Berkouwer’s rejection of any philosophical foundation for theology. “In short, the intellectual weakness of Berkouwer’s thought is his anti-metaphysical and anti-scholastic tendency, having accepted in some sense the project of the dehellenization of classical Christian orthodoxy” (p. 12).

Perhaps, then, we might offer a substitute invitation. Given these three realities—(1) Echeverria’s own criticisms of fundamental flaws in Berkouwer’s epistemology, which had also been identified and evaluated by critics in Berkouwer’s own tradition; (2) the partial affinity for Thomas Aquinas in post-Reformation scholasticism and in Herman Bavinck; and (3) the contemporary recovery of the inheritance of Reformed scholasticism—it seems more helpful to view Berkouwer’s approach as a methodological and theological detour, so that we can find our way ahead by returning to the important (but surrendered) discussion of prolegomena, in terms of categories potentially shared by both Roman Catholicism and scholastic Protestantism.

The author defends the correct claim that “Berkouwer’s ecumenical engagement with Catholicism raises the fundamental question of what is an evangelical, catholic, and orthodox theology,” but because a number of critics, including the author himself, have identified serious problems involving both the evangelical and the orthodox qualities of Berkouwer’s theological engagement, perhaps the time has come to invite a different partner to join the conversation.