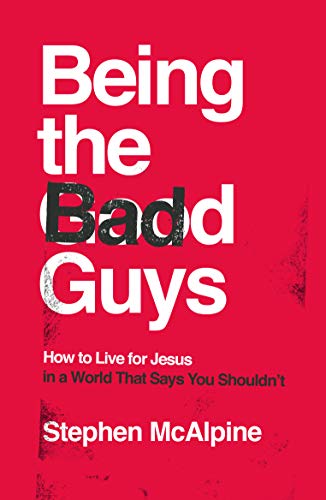 Being the Bad Guys: How to Live for Jesus in a World That Says You Shouldn’t

There’s a Mitchell and Webb comedy sketch about two Nazi SS officers on the eastern front. Perturbed at the realisation that their uniforms are decorated with skulls, Webb asks, ‘Are we the baddies?’ That same question is being asked by many Christians in our ever increasingly post-Christian western world. Sadly, the answer, in the eyes of many of our contemporaries, is ‘yes, Christians are the bad guys!’

Since the Lord Jesus Christ was rejected by the world, we should not be entirely surprised. It is the exception (not the rule) that western Christians have enjoyed such peace and prosperity for so long. In a world that has been turned upside down by sin and evil, we should not be surprised that we are seen to be ‘on the wrong side of history, the wrong side of so many issues and conversations’ (p. 11). Like Dorothy in the Wizard of Oz, we need to reflect on the fact that ‘we’re not in [Christendom] any longer’.

In part 1, McAlpine traces the culture shift that has resulted in Christians being painted as the bad guys in the popular imagination. There are many excellent books of cultural analysis which tell the same story. However, it’s likely that very few people in our churches will read the demanding work of Charles Taylor (A Secular Age [Cambridge, MA: Harvard University Press, 2007]), Philip Rieff (The Triumph of the Therapeutic [Wilmington, DE: ISI Books, 2006]) or Alistair MacIntyre (After Virtue [London: Bloomsbury, 2007]). Some may read the more accessible work of Tom Holland (Dominion [London: Little, Brown, 2019]), Douglas Murray (The Madness of the Crowds [London: Bloomsbury, 2019]), Joseph Henrich (The Weirdest People in the World [London: Penguin, 2020]) or Carl Trueman (The Rise and Triumph of the Modern Self [Wheaton, IL: Crossway, 2020]). However, everyone can and should read this excellent book—that’s why I recommended it to our church as summer holiday reading!

In part 2, McAlpine explores why biblical Christianity is counter-culturally problematic. He focuses on three of the contentious issues of our age: gender and sexuality (ch. 3), power and identity politics (ch. 4), self-authenticity and cancel culture (ch. 5). In each case, he helps us understand that our secular society has embraced ‘another gospel’: ‘A rival narrative that seeks first to expose the Christian gospel as bad news, and then to replace it with much-needed good news’ (p. 18).

One of his most important insights (summarising Philip Rieff’s difficult work My Life Among the Deathworks [Charlottesville: University of Virginia Press, 2006]) is that missiologists were mistaken to predict a return to the pre-Christendom era, when the gospel would be welcomed by the unreached pagans in a neutral public square or secular marketplace of ideas. Instead, we have moved into an uncomfortable post-Christendom era which is hostile to the gospel: ‘We’ve done such a good job at “christianising” our culture, giving it rich and fulfilling categories, that the new religion can say: “Thanks very much, we’ll take it from here”’ (p. 28).

Nevertheless, there is hope. For example, God is raising up prophets from outside the church—the so called ‘Christian Atheists’ (like Douglas Murray and Tom Holland) recognise that without the biblical roots our society will lose the fruit of Christianity. Thus, Christians can be confident that the gospel of the Lord Jesus Christ is the better story that subversively fulfils our longings for human flourishing and a better world. However, we not only must out-think the world with the better story of the gospel; we must also out-live the world in the power of the gospel.

So in part 3, McAlpine helps us to think through how we should now live. He suggests practical strategies for faithful Christian living in the church (ch. 6), in the modern workplace with its hostile equality and diversity policies (ch. 7), and out in a world that confidently asserts that we are on the wrong side of history (ch. 8). He draws wise contemporary applications from the biblical story of Daniel exiled in Babylon, Haggai rebuilding in the day of small things, and the church living in the sin city of Corinth. In each case, McAlpine suggests there is a better alternative than compromising cultural assimilation, despairing cultural withdrawal, or angry culture warring. Instead he calls us to ‘go forward together to engage with the world bravely and courageously and with love and concern: to continue to be all that Jesus has called us to be even when all the world sees is a black hat coming in its direction, and humbly but resolutely to hold out a different story and a better way and a happier ending’ (p. 142).

One of the things that all church leaders need to hear is that an essential part of our ministry today is counter-discipleship (see also the work of James K. A. Smith, You Are What You Love [Grand Rapids: Brazos, 2016]). McAlpine explains,

Speaking personally, McAlpine’s exhortation that preachers need to prepare the congregation for “the week they will be having, not the week you will be having” (p. 115, emphasis original), has made me work much harder on application in my sermons. His reminder that a ‘crucial task of the modern pastor is to prepare people for life in Babylon, Monday to Saturday (and increasingly Sunday!)’ (p. 115) is also particularly timely.

This is a book that can be picked up and read in a couple of hours, but it’s also one that will repay careful reading, marking and learning. Why not buy two copies—one for you and one for a friend, to discuss together as you seek to be the best bad guys and girls for Jesus?