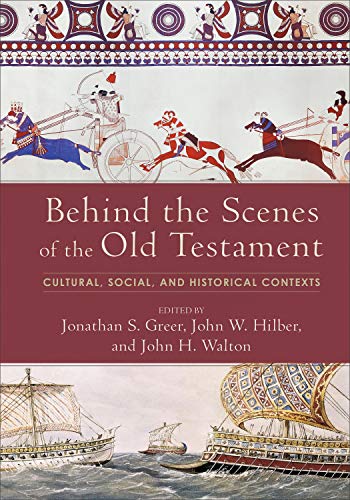 Behind the Scenes of the Old Testament: Cultural, Social, and Historical Contexts

Behind the Scenes of the Old Testament is a dictionary full of substantive articles on a wide-ranging number of issues relating to Old Testament background and ANE history. The book is cleverly organized around the metaphor of a theater play, including categories like The Stage (Historical Geography), The Sets and Props (Archaeology), Acts (Broad Historical Contexts), and Scenes (Event-Based Historical Contexts). The largest portion of the book, a third of the total pages, explores themes of the drama. Here, the writers use integrated approaches to examine a particular theme in the OT, such as family or monotheism. They take knowledge from fields previously discussed in the book, such as archaeology, ANE literature, geography, and historical events, and integrate them to show how they illuminate the culture of OT times. This method shows the reader the “pay-off” of studying historical background issues.

The editors of Behind the Scenes have recruited a diverse array of contributors, hailing from the UK, Continental Europe, Israel, and both seminary and university settings in the USA. The contributors are also both seasoned (Richard Hess, Amihai Mazar) and junior scholars (Ryan Stokes, Joshua Walton). Unfortunately, the theological and methodological perspectives may be too diverse for usefulness in certain settings. The editors admit this diversity, stating their hope that this will “enhance the pedagogical value of the volume in serving diverse readers in different settings” (p. xviii). However, more conservative scholars may be less comfortable recommending some perspectives. For example, a more conservative discussion of the conquest and settlement by Pekka Pitkänen (pp. 201–7) argues for a “settler-colonial” model. Pitkänen integrates the biblical text into his theory but also helpfully pushes against a simplistic reading of conquest texts in Joshua. Pitkänen claims that some events in Joshua are “telescoping” and written in a “stylized, exaggerated form” (p. 206). On the other hand, a less conservative entry, such as one by Matthew J. Lynch on monotheism, makes claims like, “apart from Deuteronomy 4:35, 39, and 32:39, there is little explicit monotheistic rhetoric in the Pentateuch” (p. 343). He also concludes, “Monotheism does not involve by necessity the explicit denial of other deities” (p. 347). He bases this claim on texts that mention other gods or divine beings (what he calls deities). For example, Lynch claims that biblical texts like Exodus 20:3 “allow for the possibility of other deities” (p. 342, emphasis original). Instead, such a text simply acknowledges the reality that people will believe in other deities. The OT acknowledges a major difference between YHWH, the one true God, and other spiritual beings that are so-called gods (Isa 44:6, 9–20).

Despite the difference in perspectives and methodologies, this dictionary is helpful in teaching students the importance of historical and cultural background for accurately interpreting and teaching the OT. The main benefit of this work is its comprehensiveness. The book will teach a student subjects as diverse as food preparation in Iron Age Israel (pp. 456–63) to the life of Akhenaten (pp. 253–59). Thus, the information serves to provide more depth and accuracy in teaching. For example, while recently teaching on Hosea 7:8, “Ephraim is a cake not turned,” I had in mind the kinds of ovens Israelites would use and their method for baking disks of bread (pp. 458–59). Another important example is Richard Averbeck’s entry on slavery. He explores the difference between chattel and debt slavery in the ANE, and notes that in Israel owning fellow Israelites as chattel slaves was impermissible. He also concludes that, “The institution of ancient slavery was not supplied the way that it was in the New World institution, though both could be characterized by dehumanization” (p. 430). Averbeck’s essay is very helpful in thinking about OT texts on slavery.

The editors state that the book is designed for use alongside OT surveys or introductions (p. xviii). The book is likely too detailed and large for an overview course, since students are already reading the OT text itself and a large introduction textbook. This work would be good as a reference supplement for OT introduction students or a main textbook in a course on OT background. The work is also helpful as a reference for scholars and pastors as they work on certain areas of the OT. There does not appear to be a similar work that addresses such a wide range of issues focusing on OT background, while written at a more accessible level than works like the Anchor Bible Dictionary. In the end, the book is recommended if one feels he/she has the time to work through the book as occasions arise in teaching and study.