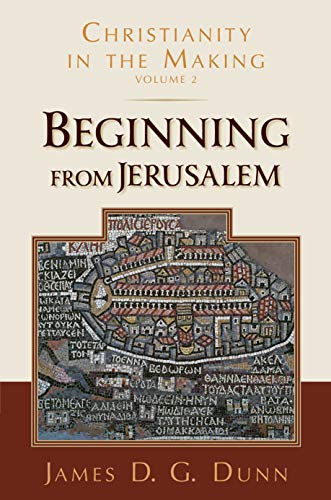 Beginning from Jerusalem. Vol. 2 of Christianity in the Making

In this second volume of his trilogy, Christianity in the Making, Professor Dunn traces the first forty years of the history of Christianity. After careful definitions of the terminology of the new movement, Dunn proceeds in an orderly chronological way, all done in a light, even breezy, manner. Dunn identifies the likely sources in the first part of Acts—the story of the Hellenists, the persecutions and the conversion of Saul/Paul, the missions of Peter—and then interestingly traces each in turn. Next he takes us by the hand and leads us through Paul’s (sometimes) hidden Syrian-Antiochene years before launching into the Apostle’s astonishing Aegean period in the course of which he briefly but seriously examines Galatians, the (four) Corinthian letters, and Romans. Dunn then follows Paul through the final chapters of Acts (‘Paul’s Passion’). He concludes with a discussion of the letters of James and 1 Peter. All this in 1,347 pages, copious indices and references included. Congratulations and thanks to Professor Dunn for a truly remarkable achievement, reflecting a lifetime of research, writing, teaching, and supervising.

Throughout Dunn maintains a style that is both readable and erudite but also unfailingly courteous. His vigorous running exegesis of the texts is expanded in a veritable mountain of footnotes engaging with (mostly recent) scholarship. The resulting work is every undergraduate’s dream, providing ready lateral access to a vast array of research interest. In consequence this is a text the scholar and the teacher will want to have in a handy place for frequent use, not least as all try to keep up with the mounting pile of secondary literature.

I find myself agreeing with Dunn at many points: his acknowledgement that Jesus was the Christ before the resurrection; his general appreciation of Luke as a historian (though Dunn thinks that Luke’s Census and Theudas/Judas references are ‘blunders’); his acceptance of the ‘we’ passages as indicative of Luke’s presence in those narratives; his general rejection of the Bousset/Bultmann thesis that Antioch was the source of Paul’s theology; his verdict that Galatians was written to ‘southern’ Galatians and that Second Corinthians is a unity; his recognition of Pauline authorship of Second Thessalonians (though Dunn doesn’t attribute Pauline authorship to Ephesians or the Pastorals); his preference for James the Lord’s brother as the author of the Letter of James and his openness at least for Petrine authority underlying 1 Peter. In these and many other ‘conservative’ verdicts Dunn treads a fairly lonely path not trodden by many luminaries today.

Inevitably, in a work of this magnitude there will be differences of opinion and criticism. Here are some of mine. I prefer to follow F. F. Bruce in seeing the private meeting in Jerusalem in Gal 2:1–10 (Acts 11:27–30) as prior to and distinct from the Council in Jerusalem (Acts 15), with Galatians written from Antioch between the two. Further, I found his treatment of Romans unconvincing. While thankfully not following the current fashion of viewing Romans as explained by a Christ-versus-Caesar issue I had hoped that Dunn would have canvassed the intensity and frequency of the ‘works’/‘law’/‘faith’ vocabulary in Romans, something that is well explained by Paul’s decade-long heated engagement with the Jewish Christian counter-mission that sought to impose circumcision as a ‘work’ on Gentile converts. Likewise his treatment of Rom 3:21–5:10 only minimally discusses the critical issues of propitiation, expiation, and imputation. This is consistent with his ‘new perspective on Paul,’ which sees the membership of the divine covenant as the reason for the ‘works’/‘faith’ debate. On the contrary, the post-Damascus Paul saw Christ crucified, not law-keeping as the only means to ‘life,’ that is, of ‘salvation’ and the source of the Spirit’s presence. Mishnah Aboth 6:7 asserts, ‘Great is the Law, for it gives life to them that practice it both in this world and in the world to come.…’ For Paul, however, ‘Christ alone’/‘faith alone’ ‘justifies’ the believer at the bar of God’s judgment and ‘reconciles’ the believer to God; covenant inclusion—for the children of Adam, Jew and Greek—is a consequence. Another point of difference is his discussion of women prophesying in 1 Cor 11 and, 14 where he suggests that Paul’s advice is merely socially conservative in the Corinthian setting (but he was socially radical at so many points).

These and other differences aside, one can but wonder at the task Dunn has set for himself and the remarkable level of achievement it represents. His two volumes of the trilogy locate him within the very select few capable of achieving such great heights.

Is there anything missing in Beginning from Jerusalem? While hesitating to envisage an even bigger book I think there are two gaps in Dunn’s mega-study. One is the relative absence of engagement with the ‘world history’ through which the disciples of the Lord passed in those four decades. For example, Paul’s decision at last to go to Rome (in ca. 54) seems to be connected with the news of the death of Claudius, who had expelled the Jews from the Eternal City (in a.d. 49). In fact, there is no reference to Claudius (41–54) in the Index. See F. F. Bruce, New Testament History (1971) and E. E. Ellis, The Making of the New Testament Documents(1999) for the nexus between salvation history and world history.

Another missing element is the absence of a theory to explain the remarkable growth and spread of Christianity through these forty years. Dunn has helpfully narrated the that and the how but left this reader wondering about the why. The history of so radical and powerful a movement as earliest Christianity cannot be ‘just one thing after another’ (Toynbee), nor does Dunn say it is. It’s true that he raises the ‘why’ question at the beginning (p. 51), but he does not appear to revisit it systematically. Yet this movement would have rapidly dissipated apart from the burning and ongoing conviction of the disciples that Jesus was the risen and exalted Saviour-Messiah, Lord and Son of God. In a word Christology was the engine that drove earliest Christianity. So, fascinating and stimulating as it is to learn that ‘this happened’ and ‘that happened,’ it would have been good to have been repeatedly reminded why.