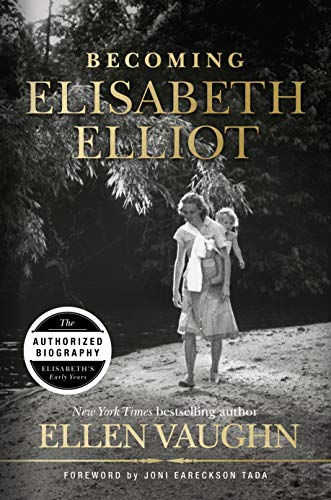 In Ellen Vaughn’s biography of the well-known missionary and hero of the Christian faith, Elisabeth Elliot, most of us will get to know better someone we already knew. Elliot’s story of sacrifice and courage on the mission field has been widely publicized both in her writing and that of others. In her seminal work, Through Gates of Splendor, with “skillful, unsentimental, muscular” (p. 9) prose, Elliot gave her account of the murder of her husband, Jim, and four fellow missionaries by the violent Waodani tribe in a remote region of Ecuador as early as 1957 (the reader should note that Vaughn sensitively chooses not to use the more commonly known term Auca to describe this people group out of contemporary understanding of its offensive origin). Their faithful praying and planning to share the gospel with an unreached people group seemed only to end in heartbreak. But instead of being the end of that mission, this much-publicized episode was actually the bloody beginning. Their experience caught the attention of Life magazine and soon spread around the world.

For most of us, that is where Elisabeth Elliot enters the historical narrative, as the dutiful young wife of murdered missionary Jim Elliot. In that sense, Becoming Elisabeth Elliot functions like a fascinating prequel. The reader meets a young Betty Howard from her earliest days as the child of missionaries in Belgium, growing up in an idyllic setting in her New Jersey family home, through boarding school days at Hampden DuBose Academy in Florida, and attending Wheaton College where she met her future husband and her days as a single missionary (during the five long years it took Jim to determine if he was called to marry her). By the book’s end, we’ve become acquainted with a many-layered woman who wrote eloquently, loved passionately, and lived a life characterized by a singleness of purpose: obedience to the will of God.

Part of what makes this book a treasure is that Vaughn is able to illustrate this trait not only in the dramatic moments of Elliot’s life but also in the mundane, uncertain day-to-day living of any human existence. As the author notes, “For Elisabeth, as for all of us, the most dramatic chapters may well be less significant than the daily faithfulness that traces the brave trajectory of a human life radically submitted to Christ” (p. 11). Vaughn shows us examples of this radical submission again and again throughout the book. In one chapter entitled “The First Death of Elisabeth Elliot,” we meet a committed young missionary using the full force of her considerable linguistic gifts to develop a written language for the Colorado people of Ecuador’s western rainforest. In harsh conditions, she labored for many months to complete a phonemic alphabet of Tsahfihki in the hope other linguists could eventually use it to translate the New Testament, only to have her invaluable and much prayed for language informant brutally murdered and all her linguistic work stolen off the back of a truck, never to be recovered.

The tragic loss of her husband, which left her a single mother of a young daughter, is well known, as is her living and working with the same tribe of Indians who killed him. What more often goes untold is how much difficulty Elliot encountered trying to begin her work with the tribe. Competing mission groups and a challenging relationship with Rachel Saint (sister of martyred missionary Nate Saint) made it seem like she would never get there and accomplish little once she did. But Betty remained steadfast, thankful for all the seemingly small things—they found all five bodies with little difficulty—and never blaming God for the big—that there were five dead bodies to be found.

Through it all, author Ellen Vaughn skillfully weaves together quotes from letters (Elliot is a biographer’s dream in that she left so many), published writings, and reminisces from friends and family. Her writing style is the kind that, though informative, “gets out of the way,” so it never feels like the author stands between reader and subject. The narrative also benefits from in-depth character development, focused of course on Elliot while not neglecting those who knew her best. Becoming Elisabeth Elliot is a work that will inspire, challenge and exhort its readers to strive for a life like Elliot’s, radically devoted to God.