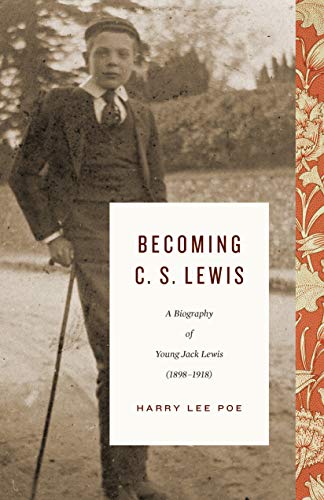 With all of the emphasis we in America place on what the education bureaucracy calls “early childhood education,” usually meaning the formal schooling of children beginning around age three, the large majority of studies on the impact of such only consider “outcomes” through about fourth grade. Becoming C. S. Lewis by Union University Professor of Faith and Cultural Studies Harry Lee Poe takes it quite a bit further, examining the impact of education on the adult. Poe’s thesis is that the habits and preferences that captivated Jack Lewis—directing his thinking, reading, and philosophizing—formed quite fully in his childhood and especially adolescence. The ideas and preferences that engaged and drove the intellect of C. S. Lewis the man first presented themselves to and found a home in the fertile imagination of Jack Lewis, the boy. So much of Lewis’s formation begins at the age of 9, when Lewis lost his mother and embarked on a rich if sometimes brutal education amidst boarding schools and tutors. Starting at that point, Poe expertly shows numerous instances and expressions of thought in young Jack’s life, which he then skillfully attaches to the C. S. Lewis the rest of us already know.

While numerous examples could be given, I particularly liked the section “Finding Narnia” in chapter four, where Poe briefly recounts the beloved children’s books to show how seeds of their plots, main characters, and even their fantastical settings first found soil in the stories and landscapes of Lewis’s youth.

However, the connections Poe makes across the years spanning Lewis’s youth to adulthood are not crystal clear in every instance. Sometimes he delves into a cumbersome level of detail about the original influence. For example, Poe spends several pages describing Wagner’s operas, interesting to be sure and likely new information for some. Still, this reader fails to see how such detail contributes overall to a portrait of Lewis or even the operas’ influence on him. But this does not detract from the overall work because such instances are rare, and readers not wishing to go that deep can always skim. In other parts, the order of the material is a little puzzling. Poe attributes a lot of importance to the impact on Lewis of the English epic poem, The Faerie Queene, even calling it “the making of C. S. Lewis” (p. 167). However, he waits until the very end of that section in chapter 5 to give a summary of the work “for the benefit of those that have never read The Faerie Queene” (p. 169). Those who are unfamiliar with the work may find this frustrating.

Now, the rest of this review is directed at those who have taken upon themselves the daunting and, at times, discouraging task of educating and ministering to teenage boys. As a mother of four sons, I found myself time and again instructed and encouraged. I would recommend it to every parent or aspiring youth minister. Sally Clarkson, a popular author of parenting books, writes about “awaking wonder” in the minds of children and youth. Becoming C. S. Lewis is, in some ways, just an extensive recounting of how “wonder” took root and developed in the heart and mind of Jack Lewis. It took such deep root that even the thoroughly secular worldview of his brilliant and much-admired tutor, W. T. Kirkpatrick, could not snuff it out. The books and stories Lewis read and identified with in his boyhood and adolescence placed a protective shield around his mind, one that in the end could not be penetrated even as he sat under atheist tutors.

This is not to say Lewis walked a straight or, from the looks of it, a safe path from the great literature and Norse mythology he loved to embracing Christianity. On the contrary, he dabbled in the occult, professed atheism, then agnosticism, and even exhibited a disturbing albeit brief interest in sadomasochism as a teen. However, great books and epic stories that valued heroism and sacrifice put “Jack the literary man” at odds with “Jack the philosopher” (p. 192).

The lesson this mother and educator of boys gleaned is that insisting upon great and uplifting literature as part of the curriculum, even over and above objections from the student, is worth it. Not all of us come to that conclusion quickly or easily. It can be an uphill battle when there is much competition from not so great books and ubiquitous screens. But this is all the more reason to introduce students to the overarching narratives of heroic and virtue-laden great stories. From that perspective, Becoming C. S. Lewis offers one of the best arguments in favor of a literary education I can imagine.

The other important lesson from this book is that despite our deepest yearning to see those to whom we seek to minister profess faith in Christ, we cannot skip ahead to that part. We do not have the benefit of knowing “the rest of the story,” as in the case of C. S. Lewis. But we can feel encouraged knowing the God who saves sinners not only knows their story from start to finish but is also its sovereign Author.