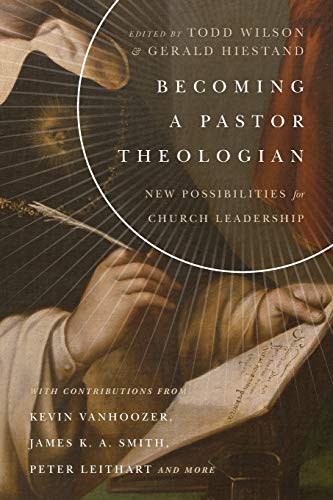 This book was written in response to the startling crisis that the ancient vision of pastor as theologian has been “obscured by the separation of the roles of pastor and theologian” (p. 2). This book contains contributions from fifteen diverse authors, organized into three parts: 1) The Identities of the Pastor Theologian; 2) The Pastor Theologian in Historical Perspective; 3) The Pastor Theologian and the Bible. The first part of the book consists of five chapters that were plenary addresses at the first Center for Pastor Theologians (CPT) conference (http://www.pastortheologians.com). The CPT began in order to “resurrect the ancient vision of the pastor as a theologian—not as an end in itself, but for the renewal of theology and thus the renewal of the church in its ministry and mission to the world” (p. 2).

In the opening chapter, Peter Leithart approaches the identity of “The Pastor as Biblical Theologian,” calling for “a biblical theology produced by pastors who serve local congregations for the edification of fellow believers in their own and other churches” (p. 7). The current literary landscape is filled with either popular devotional works or technical highly specialized studies. The in-between gap must be filled with ecclesial biblical theology by pastor theologians who study the Bible as a whole (p. 15), delivering the text as gospel to God’s people (p. 16).

James K. A. Smith identifies the pastor theologian as “political theologian,” one who leads a repertoire of formatives rites (p. 24); the focus shifts from policing boundaries to securing a platform for expressing beliefs, which forms habits and desires that shape us (p. 24). Thus, the role of pastor as political theologian involves at least two things: 1) as ethnographer, he exegetes the cultural rites of the empire, reading culture through a biblical lens and thus exposing idolatry; 2) as liturgical catechist, he explicates the vision of the Good that is carried in the practices of Christian worship (p. 26).

Kevin Vanhoozer defines the identity of public theologian: “Pastor theologians are organic intellectuals, neither a scholar nor a genius but someone who is able to articulate the needs, convictions and aspirations of the community to which he or she belongs, the evangelical mind of the body of Christ” (p. 42). He is a social activist of sorts, organizing and preserving the church by leading them in transformative practices that increase cultural and biblical literacy, forming them into the image of Christ (p. 42).

In the last chapter of this introductory section, Gerald Hiestand briefly reviews the main lines of his earlier collaborative work with Wilson (The Pastor Theologian: Resurrecting an Ancient Vision [Grand Rapids: Zondervan, 2015]). The ecclesial theologian operates within “four overlapping spheres of theological scholarship”: research, systemization, ecclesial significance articulation, and ecclesial implementation (p. 57). Whereas academic scholarship is best suited for research and systematization, the ecclesial theologian takes systematized data and makes explicit its significance for the Christian community, and also “clarifies and prescribes how an idea of concept should be implemented in the Christian ministry or within the Christian community” (p. 60).

Calvin led pastors of Geneva to embrace the vision that every pastor was to be a pastor theologian (p. 82). Scott M. Manetsch summarizes Calvin’s legacy as threefold: 1) “creating religious institutions to ensure clerical accountability and promote theological awareness”; 2) promoting “faithful theological reflection … in the context of Christian community”; 3) illustrating that “the strategic task of Christian theology belongs … to pastor theologians in local churches who are well-equipped to formulate, translate and apply God’s truth to the particular concerns and needs of the people in their congregations” (pp. 90–91).

Phillip Graham Ryken introduces readers to Thomas Boston, who exemplified the ideals of the pastor theologian by having reverence for the triune God, confidence in the Bible, theological simplicity, respect for the sacraments, and love for the church, with equal passion for its peace and purity (p. 94).

Chris Castaldo looks to the legacy of John Henry Newman to overcome contemporary obstacles to the pastor theologian. Castaldo specifically identifies three obstacles: 1) the degradation of persons, 2) the sterility of individualism, and 3) utilitarianism. He mines from Newman detailed principles for engaging in the mentoring ministry of the pastor theologian that counter each of these contemporary challenges.

Edward W. Klink III begins part three by addressing “The Pastor Theologian and the Interpretation of Scripture.” He asserts that because one of the pastor theologian’s primary tasks is to correctly handle the Word of truth, he must embrace a correct doctrine of Scripture (p. 137). This grounds the exegetical task by giving insight to the interpretive rules and gives oversight to Scripture’s constituent parts and unifies their functions (p. 139).

Jason A. Nicholls outlines “The Pastor Theologian in the Pastoral Epistles.” He argues that Timothy and Titus may be nearest “scriptural approximation to the pastor theologian” (p. 152). In the Pastoral Epistles, Paul gives five overarching mandates that shape the role of the pastor theologian (p. 152). Timothy and Titus were given both theological and pastoral mandates, though they functioned primarily as pastors (p. 161).

Laurie L. Norris argues for the role of “The Female Ecclesial Theologian.” Roles aside, men and women need to “be doing the work of theology and sharing the ministry load … alongside one another, without competition or suspicion” (p. 167). Norris’s main concern for churches that may not permit women to fill a role of theological proclamation is that they would not stifle the role of women in biblical-theological reflection (p. 169).

Josh Chatraw situates the pastor theologian as “apologist.” Despite the challenges to this role, its resurrection requires that pastor theologians bear the burden of responding to the consistent cries of “help my unbelief” (p. 182).

Eric C. Redmond identifies the pastor theologian as a “giver of wisdom” in three arenas. “The local theologian should encourage members to develop the habits of seeking wisdom” (p. 190). The popular theologian constructs for the church works that demonstrate the importance of wisdom for living coram Deo … and fulfilling the Great Commission” (p. 191). “The ecclesial theologian … is in position to engage the foolishness of the world and equip the church and its academies to do the same” (p. 191).

Douglas Estes sets forth the Apostle John as a model pastor theologian, calling for modern pastor theologians to model his practice of writing. Estes focuses on the writing of 2 John, using this text to illustrate the practice of “creative theological ecriture” (p. 196), which he defines and applies helpfully.

As a follow-up to The Pastor Theologian, this book embodies a terrific next step of continuing to engage a broader and more diverse community in the pastor theologian conversation. Part two of the book contributed greatly to the excellent foundation established by part one, tangibly framing the pastor theologian movement in the context of church history. Academics and seminary students would benefit by reading this book and then lending their support and engagement to this church-strengthening movement.

Though this book would greatly benefit those who are already academically oriented, the academic tone of this work increases its challenge to influence the majority of pastors. This is reflected not only in the academic tone of the book, but also in the selection of the elite authors (each of whom has a PhD or is a PhD candidate). Further, the book’s list of contributors mentions current or former pastoral ministry experience for only ten of the fifteen authors. If indeed the pastoral office retains the burden of the church’s theological leadership, then actively serving pastors should be with Wilson and Hiestand at the front lines of engagement to revive this tradition, aiming to inspire the partnership of their comrades, the common pastor. This critique that the book is inaccessible to the majority of pastors does not undermine its contribution to the strength and vitality of the pastor theologian movement as a whole. Perhaps the CPT already has in mind further work that engages common pastors without academic training who aspire to become pastor theologians.