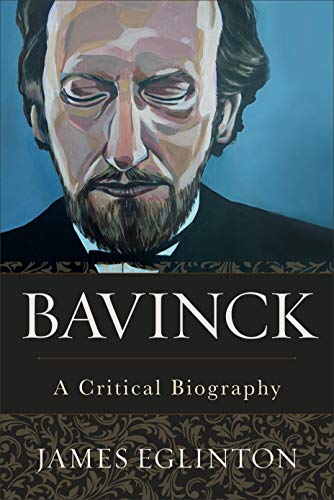 In Bavinck: A Critical Biography, University of Edinburgh theologian James Eglinton has given us a definitive biography of the fine Dutch theologian of a century ago. Herman Bavinck is now in the process of being freshly appreciated in light of the belated translation into English (2003–2008) of his 4 volume Reformed Dogmatics (2nd ed. 1906–1911).

The biography is justifiably entitled ‘critical’ for it takes into account five previous attempts at biographical treatment. Though of value (especially when the writers had first-hand knowledge of their subject), these volumes suffered from the limitation of either being produced too rapidly after Bavinck’s passing in 1921 or not taking into account a wide enough range of archival material. It is especially in this last respect that Eglinton has surpassed those who have come before him. In addition to mining the Bavinck archive now curated at Amsterdam’s Free University, he has made very effective use of personal papers and correspondence still in the possession of his subject’s descendants. Some earlier hasty judgments about Bavinck are overturned in this volume.

To the first adjective, “critical,” this reviewer would add a second: “empathetic.” Bavinck, the future accomplished theologian, raised some eyebrows when he discontinued his theological preparation for the ministry in his denomination’s Kampen seminary in favor of more challenging studies in the prestigious state-funded University of Leiden. Eglinton sensitively portrays the Bavinck family, originally hailing from Bentheim at the German border, as an example of a then-widespread upward social mobility. The father, Jan Bavinck, had initially been apprenticed to a wood-worker but entered the Reformed ministry after only rudimentary training. Eventually identifying with the separatist Reformed movement originating in the Netherlands in 1834 (the “Afscheiding”), able preacher Jan Bavinck was determined to gain for his children the kind of challenging education never available to him.

The early Afscheiding movement had been harassed and prosecuted for its refusal to abide within the national Reformed Church. But after constitutional reforms were introduced in 1848, there began a process by which these separatists moved haltingly into the cultural mainstream. Eglinton’s ecclesiastical background within Scotland furnishes him with the kind of intuition necessary to assess this process. The process yielded a theological graduate, Herman Bavinck, who represented a fusion of rugged Afscheiding conservative piety and a healthy determination to interact with modernity in the late 19th century. After a brief pastoral ministry at Franeker, Bavinck joined the Afscheiding theological faculty at Kampen in 1883. He was resolute in aiming at being orthodox, Reformed, and modern.

The reviewer has affirmed that the biography is both critical and empathetic. He would add that it also offers something of a “recalibration” of Bavinck’s significance, and in two respects. First, Eglinton deserves credit for setting a clearer perspective on what Bavinck’s relationship with Kuyper was and what it was not. Bavinck was not (as one contemporary chose to depict him) “Kuyper’s henchman.” An admirer of Kuyper, he was; a debtor to Kuyper also. But the relationship was not one of convex (Kuyper) and concave (Bavinck), neither as to temperament (with Kuyper being the master of the flamboyant gesture, Bavinck being the more measured and circumspect), nor social vision (Kuyper being the more triumphalist architect of societal transformation, the younger Bavinck taking far more seriously the ominous secularizing trends in western society), nor theological method (Kuyper sometimes staking out speculative theological positions which Bavinck found deeply problematic). We come away with the impression that what made Bavinck distinctive from Kuyper makes him a more useful theologian for us.

Second, Eglinton also clarifies for the reader the significance of a fresh orientation in Bavinck following on from the completion and revision of his massive Reformed Dogmatics in 1911. One earlier interpreter of Bavinck conveyed the impression that with this project behind him, Bavinck’s dogmatic interest waned during the remainder of his career while he concentrated on questions of religious psychology, Christianity and culture, and the role of women in modern society. A more plausible understanding of his final period of productivity is that in the face of the de-Christianization of Western societies, Bavinck turned his attention to the advancing of the case for “mere Christianity” in a common front against unbelief. But this did not require him to back away from his Dogmatics.

This splendid biography, which I cannot commend too highly, does at the same time have limitations. For one, it presupposes a familiarity with and curiosity about the various strands of 19th century Dutch Protestant life beyond what an otherwise eager reader can bring to the task. Terms like Old Reformed, Revéil, Afscheiding, Doleantie—while familiar enough to this reviewer—will represent a “new world” for most who read and may leave readers bewildered. Several of these distinctions are of very weighty importance for the ongoing Reformed theological tradition beyond the Netherlands, and they deserved to be more fully explained.

A second reservation, rather like the first, is that this fine biography does not help us to grasp the wider significance of the story being told. We are told that Bavinck, like Kuyper before him, gave a series of Stone Lectures at Princeton (1908) and that Bavinck’s successor, Valentijn Hepp, did the same in 1929. But we are not sufficiently helped to grasp what this meant, namely that by 1910 or 1920, the gravitational center of global confessional Reformed theology had shifted. This “center” had earlier been situated in Victorian Scotland and gradually recognized to exist at Princeton. But until the mid-20th century, that preeminent center of Reformed scholarship and energy had a Dutch address. And at the root of that theological momentum had stood Bavinck.