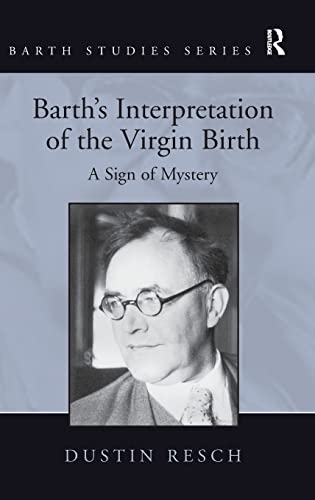 Barth’s Interpretation of the Virgin Birth: A Sign of Mystery

Dustin Resch, Assistant Professor of Theology at Briercrest College and Seminary in Caronport, Saskatchewan, has written a thorough and helpful volume on Karl Barth’s interpretation of the Virgin Birth (hereafter VB). The book has five chapters that can be further subdivided into three topical sections relevant to the subject: historical, dogmatic, and Marian. The Marian section (chapter 5) is more of an appendix to Barth’s doctrine of the VB, where Mary is seen as a prototype of the non-synergistic, yet non-deterministic, relation between divine grace and human agency. We shall focus on the first two sections.

In the first section, Resch surveys the doctrine of the VB as treated by selected figures in the Western Church (chapter 1) and Barth’s own historical development on the matter (chapter 2). The patristic era is represented by Irenaeus and Augustine, the medieval period by Aquinas, the Reformation by Luther and Calvin, and the modern period by Schleiermacher, Strauss, and Brunner. The point of the survey is simply to establish certain themes that clustered around the treatment of the VB as the backdrop for Barth’s reworking of the classical tradition in the face of the challenges of the modern era to the doctrine. In particular, the VB’s “fittingness,” or its coherence within the broader contours of Christology, is seen to have been pronounced in the classical era, though muted during the Reformation. The notion was revived in the modern era only to demonstrate the inappropriateness of the doctrine in the light of critical biblical scholarship. In addition, the question of original sin and its transmission (especially in the sexual act), and the bearing of these on the sinlessness of Jesus are seen to loom large in the tradition. Once the link between original sin and human transmission is severed in the modern era, the VB comes to be seen as having no specific theological purpose. Finally, it is shown that the classical period used the VB as a paradigm of the Spirit’s work of regeneration in believers.

Barth’s personal thinking on the doctrine starts with the early Göttingen and Münster lectures in dogmatics, where it is prominently located in the prolegomena. At this stage of his career, Barth views the VB as having ontological (constitutive) significance for the person of the incarnate Christ. Perceiving himself as working within the Augustinian tradition, nonetheless Barth desires to be rid of any notion of biologically inherited original sin. The removal of the male as the “actualizing,” leading force of world (Adamic) history, and not as biological father per se, constitutes the removal of original sin. Thus, the VB becomes an exception within the continuity of human sinfulness, establishing Christ’s sinlessness and, by the removal of the male, exhibiting clearly that God alone was his Father.

By the time of The Great Promise (1934), where we get his only extended theological exegesis of an infancy narrative (the Lucan one), Barth begins referring to the VB as a sign. Here, and further in the Credo (1935), the VB moves from having ontic or constitutive significance to having noetic significance. That is, the VB does not accomplish the incarnation, but attests to it (p. 61). It guards the mystery of the incarnation by marking it with a miracle. Quite importantly, this enables Barth to interpret the VB without affirming any particular view of original sin and its transmission.

When we come to the Church Dogmatics (hereafter CD), again within the prolegomena now understood more robustly as a “dogmatics in brief,” Barth, having considered various historical-critical objections, concludes that the VB was accepted by the church because of its “fit” with the central elements of the faith (p. 74). For Barth this means it is a sign of the mystery of the incarnation (and not simply the incarnation itself) that sets a limit to grasping the revelation of God in Christ by merely human means. In this role it is coupled to, and mutually interdependent with, the sign of the empty tomb, together marking off the mystery of God’s revelation in its origin and goal (p. 79). Abandoning the VB as sign is, for Barth, to dissolve the mystery into a purely natural theology. That is, without the VB, the incarnation can come to seen, as in Schleiermacher, as the apex of something latent in humanity.

The second major section of the book, the dogmatic section, consists of two chapters. In chapter 3, Resch, explores the VB as the sign of God’s “Yes” (grace) and “No” (judgment) to humanity. Positively, the VB attests to the genuine yet unique humanity of Jesus. It does so in a “fitting” way since it attests to the primacy of sovereign grace in the mystery of the Word’s becoming flesh. Negatively, by the removal of the man, the VB indicates human inability and precludes mankind’s active contribution to the incarnation (p. 86). In chapter 4, the spiritual conception of Jesus, grounded in the Spirit’s inter-Trinitarian role as the “bond of love” between the Father and the Son, is seen as the prototypical event of the realization of God’s grace (i.e., regeneration) in human beings (pp. 127–138). It demonstrates that human beings are dead in regard to their own possibility for God. Human conversion is originally and fully present in the humanity of Christ himself (pp. 151, 160). Here the conception of Jesus, his baptism, and his resurrection are linked in a theological order which, “by strict analogy” (p. 162), manifests the Spirit’s subsequent work in believers as an appropriation of the very life of Christ.

A couple of issues arise with respect to the dogmatic core of the book (chapters 3 and 4). First, one would think that the removal of the man is better seen in the conception of Christ by the Spirit (a topic covered separately by Barth in the CD, and taken up by Resch in the fourth chapter) than in his VB. Thus, despite the separate chapters on the two events, a certain confusion about what exactly is in view hangs over parts of Resch’s presentation. For example, in the discussion of the Lucan exegesis where Barth first interprets the VB as a sign, we are told that he does so on the basis of the parallel between the sign of Zechariah’s muteness and the “sign” of the spiritual conception given to Mary (pp. 54–55). This lack of clarity is due, in part, to the fact that, for Barth, “the VB and the conception of Jesus by the Holy Spirit are two aspects of the one sign that is Christ’s miraculous human origin” (p. 83). In fact, we are later told that the VB “communicates the largely negative aspect of the sign of God’s judgment on sinful human beings” (p. 126), while the “Yes” of God’s grace is seen in the spiritual conception. Thus, the two-fold sign remained, for this reviewer, shrouded in some mystery!

With respect to the humanity of Christ assumed in the VB, two important issues emerge. First is Barth’s well-known reworking of Chalcedonian (ontic) categories, especially the concept of “human nature.” For Barth, human “essence” (his preferred term) is all that one is and does in one’s various acts and relations. Jesus’ “human essence” is his whole unique history (pp. 98–100). One wonders, then, in spite of Resch’s use of the language of assumption (e.g., p. 100), how any or all human essence(s) can be instantiated or assumed by Jesus’ unique essence.

The second issue arises from Barth’s rejection of the Augustinian notion of inherited sin, and thus the traditional role of the VB in preserving the sinlessness of Jesus. For Barth, guilt is attached “directly to the responsible acts of human beings” (p. 117). While “original sin” is universal and pervasive, it is neither imputed nor inherited. Yet neither this view of original sin nor the removal of the male from the VB prevents Christ from voluntarily assuming “sinful flesh” (pp. 118–121). Jesus comes into the same fallen sarkic order under the judgment of God in which all human beings exist. He assumes sinful flesh, yet, unlike us, he lives sinlessly in it. This assumption of fallen flesh does not, for Barth, entail any intrinsic impurity in Christ. But it is unclear why fallen flesh, under the judgment of God, should have no associated internal or psychic disorder. Resch’s presentation can leave one with the idea that liability to the judgment of God is the only impact sin has had on our humanity.

This leads to the general concern that the book is almost wholly uncritical exposition. It contains two and a half pages of criticism, mostly in the form of questions (good ones) at the end of the book. Overall, however, this is a minor complaint. This is a rigorous and stimulating study. It makes for excellent Christmas season reflection and, as a bonus, it is a wonderful entry into some crucial themes in Barth’s thought such as his theological method, his overall Christology, his pneumatology, and his conception of human agency.