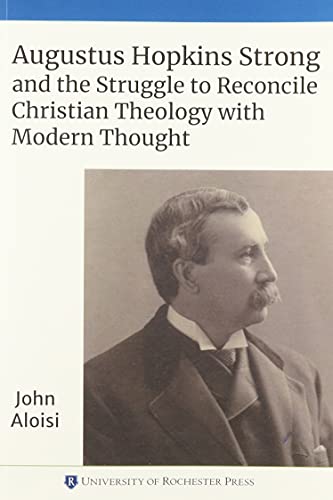 Augustus Hopkins Strong (1836–1921) is a towering figure in the Northern Baptist tradition. In the 2001 edition of Theologians of the Baptist Tradition, a chapter on Strong follows the “prince of preachers,” Charles H. Spurgeon. Strong served as the president of Rochester Theological Seminary from 1872 until 1912 and is best known for his three-volume Systematic Theology, a standard text for Baptist seminarians until the last quarter of the 20th century.

Strong is arguably the last theologian from the New England tradition whose views could arguably comport with conservative and evangelical readings of Scripture. Strong was neither a modernist nor a fundamentalist. He warmly accepted Darwinian evolution but also defended doctrines such as the virgin birth and bodily resurrection. A 2009 single-volume reprint of the 1907 edition of Strong’s Systematic Theology by Judson Press features a foreword by noted Baptist church historian Gregory A. Wills. That Strong’s work continues to be read in evangelical circles today indicates that attempts to reconcile his own thought to orthodoxy are ongoing.

In Augustus Hopkins Strong and the Struggle to Reconcile Christian Theology with Modern Thought, John Aloisi seeks “to examine the role ethical monism played in Strong’s theology and ministry” (p. 3). While “ethical monism” has an obtuse and pedantic ring, Aloisi explains the term’s meaning for Strong’s theology and his wider intellectual project. Aloisi supplies a swift, engaging summary of his life in the book’s first chapter. This includes details such as the remarkable fact that Augustus’s father, Alvah Strong, was converted under the preaching of Charles G. Finney in 1831 (p. 7), as was Augustus himself in 1856 (p. 14). Strong’s pastoral experience prior to becoming Rochester Theological Seminary’s president, including stints in Cleveland, Chicago, and Haverhill, Massachusetts (pp. 20–28), reminds readers that Strong did not initially pursue a career in academia.

In the second chapter, Aloisi covers the various intellectual currents and figures whose ideas influenced Strong’s thought. This list includes post-Kantian German idealists such as Johann Gottlieb Fichte, Friedrich Schelling, and G. W. F. Hegel. Lesser-known American idealists such as Josiah Royce and Borden Parker Browne are also named. Aloisi notes that although Strong never cited a single philosophical influence, “references to these men … in Strong’s Systematic Theology, suggest that he viewed them as philosophical sparring partners who sharpened his thinking about issues related to human responsibility, personal existence, and ultimate reality—in short, about what he called ethical monism” (p. 45).

In chapter 3, Aloisi includes Strong’s own definition of ethical monism, written in his Autobiography (1908), as “this general doctrine of Christ’s identification with the race because he is the creator, upholder, and life of the universe” (p. 51). The author brings context to this term, noting that trends in science, literature, theology, and philosophy were moving in a monist direction at the end of the 19th century, compelling him to harmonize monism with orthodoxy. He believed that ethical monism could maintain “both the freedom of man and the transcendence of God” (p. 55). In a later defense of ethical monism, Strong wrote, “as the attraction of gravitation and the inductive reasoning of evolution are only other names for Christ, so he is the basis for inductive reasoning and the ground of moral unity in creation” (p. 71).

Chapter 4 explains how Strong’s ethical monism impacted three doctrinal areas: (1) scripture and experience, (2) evolution and miracles, and (3) sin and atonement (p. 72). As to biblical inerrancy, Strong moved from a “more functional and less objective” view of inspiration (p. 78) later in his career. Aloisi cites Strong’s Autobiography, in which he claimed to interpret the Bible “from the point of view of the immanence of Christ” (p. 79). As for evolution, the “imminent Christ” likewise constituted the principal cause behind the Darwinian process (p. 83). Strong came to understand miracles as a higher manifestation of natural law. As for the atonement, Strong came to believe that Christ was united to the human race before Adam’s fall. He wrote, “Christ therefore, as incarnate, revealed the atonement rather than made it” (p. 91).

The fifth chapter considers Strong’s contemporaries and their reception of ethical monism. Readers on the right and left were equally displeased with the system (p. 97). Aloisi considers Strong’s acceptance of liberal and conservative faculty members at Rochester as “emblematic” of ethical monism as a whole (p. 109), a non-viable arrangement. He, therefore, concludes that it failed to bring together orthodox theology and modern thought (p. 135).

Notwithstanding Aloisi’s claim, later evangelical theologians continued to engage with Strong. Millard Erickson, for example, cites him thirty-six times in his Christian Theology, and Wayne Grudem cites him twelve times in his Systematic Theology. No theologian from 1870–1910, Baptist or otherwise, comes close. Alister McGrath, in his Christian Theology: An Introduction, considers Strong’s views of inspiration a via media between Romantic subjectivity and the Old Princetonian objectivity. These considerations suggest that “failure,” at least in terms of influence, might be too strong a word.

It would be trite to claim that Strong too easily accommodated the prevailing philosophical ideas of his day, for this is arguably what every theologian does to some extent. Augustus Hopkins Strong’s life and thought demonstrate how far a theologian can wade into the waters of contemporary philosophical currents without being swallowed up. The fact that his legacy is debated today proves that the line which separates an innovator from a heretic is quite thin.