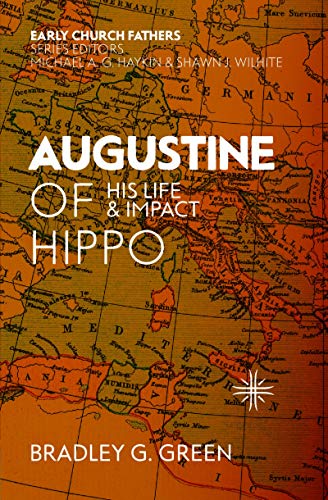 Augustine of Hippo: His Life and Impact

Bradley Green, professor of theological studies at Union University, gives evangelical readers an approachable introduction to the life and thought of Augustine. Augustine of Hippo: His Life and Impact is another great entry in the Early Church Fathers series, edited by Michael A. G. Haykin and Shawn J. Wilhite and published by Christian Focus. The series aims to provide modern evangelical readers with portraits of early Christian thinkers for the purpose of appreciating their work and connecting the past with modern day Christian thought. This particular entry on Augustine accomplishes that goal. Part biography, part theological essay, and part guidebook, Green’s work provides evangelical readers with a go-to source to understand Augustine’s profundity and place in the tradition of Christian thought. In under 200 pages, Green manages a feat of brevity while maintaining integrity and thoughtfulness. As far as introductory texts on the life and thought of Augustine, this will be a go-to source for years to come.

In chapter 1, a brief biography of Augustine is presented, drawn primarily from Confessions. This establishes the ground for doctrinal explorations in Augustine, from the doctrine of God (ch. 2) to creation (ch. 3), to Augustine’s understanding of original sin and its effects on humanity (ch. 4). Green provides an overview of Augustine’s discussion on nature and grace in light of the Pelagian controversy (ch. 5), as well as his doctrine of the church in light of the Donatist controversy (ch. 6). The final chapters of the work cover Augustine on epistemology and learning (ch. 7), Augustine’s public theology (chapter 8), and the relationship of Augustine to Protestant theology (ch. 9). Readers are given a select bibliography of primary and secondary sources to enhance their study of Augustine.

Green treats readers with easy-to-read chapters on the significant movements of Augustine’s thought in light of various doctrinal controversies of his time. He avoids the temptation of painting Augustine as a mere controversialist. Rather, his theology is brought forth not only in light of controversy but is also nurtured by Scripture and in service to the church. A beautiful example of this is Green’s reflection on sin and the need for grace in Augustine’s theology: “For Augustine, knowing what we ought to do is not enough. We must also delight in doing what we ought to do” (p. 85, emphasis original).

Augustine of Hippo: His Life and Impact should be commended to anyone who wishes to understand the legacy of Augustine’s thought. Its short-form nature, Green’s ability to cut to the marrow of the topic, and the presentation of Augustine’s ideas in readable fashion make it the ideal text for readers new to Augustine. Missing in the work is some reflection on Augustine as pastor as well as his contributions to Christian spirituality. While Green does prompt readers to explore these topics in the secondary literature, such discussion may have enhanced the volume and contributed to a facet of Augustine’s legacy in need of continued recovery and reflection. Despite this small critique, Green should be commended for producing such a helpful work for new readers of Augustine. Green’s text should find itself in courses introducing the life and thought of Augustine, as well as courses on patristic thought and theology in general. It’s approachable for students of all ages, and its particular attention to Protestants make it ideal for such audiences.