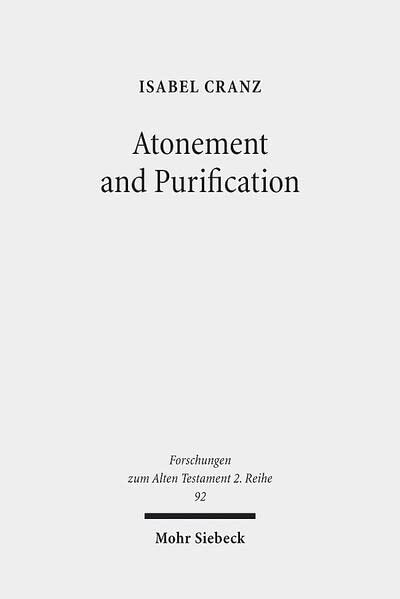 Atonement and Purification: Priestly and Assyro-Babylonian Perspectives on Sin and its Consequences

In this revised dissertation, Isabel Cranz approaches Priestly literature from a comparative perspective. She focuses her work on a comparison of Leviticus 4–5 with Šurpu, an Akkadian ritual text found and used throughout Mesopotamia. As a result of this comparison, Cranz concludes, “Priestly rituals of atonement and purification highlight how the Priestly writers addressed sin and human suffering from the perspective of sanctuary maintenance. This focus on the sanctuary was not the result of a conscious expression of monotheism or an attempt to challenge foreign rituals. Rather, the Priestly writers were defending the privileged position of the Aaronides against their critics and the encroachments of rival priestly groups such as the Levites” (p. 1). This concise summary highlights the three main results of Cranz’s work: 1) Priestly ritual focuses on the maintenance of God’s presence in the sanctuary; 2) Priestly ritual contains no polemic against foreign practices, nor does it advance a monotheistic agenda; 3) Priestly ritual grants unique status and authority in the sanctuary to the Aaronide priests vis-à-vis other claimants to ritual privilege (especially Levites).

Cranz divides her argument into an introduction (ch. 1) and seven subsequent chapters. In Chapter 2, Cranz explains her focus on ritual elements (e.g., ritual contexts, participants, activities) in the comparison of Leviticus and Šurpu. In chapter 3, Cranz compares sin and its consequences in both Šurpu and Lev 4–5. She observes that both texts describe individuals undergoing divinely induced suffering for some hidden sin(s), which must be confessed to experience relief and restoration with the deity. Despite this overarching similarity, Cranz highlights the different literary settings of the rituals in Šurpu (an instruction manual for Mesopotamian ritual specialists) and Leviticus (a set of instructions communicated to both the priests [Lev 6:2, 18] and the people of Israel [Lev 1:2; 4:1–2; 7:22–23, 28–29]), as well as the very different nature of suffering in each text (demonic possession in Šurpu; physical and/or emotional distress expressed by the verb אשׁם [“to suffer guilt’s consequences”; for this translation, see p. 39] in Lev 4–5).

The following two chapters (4–5) focus on the ritual elements of Šurpu. In Chapter 4, Cranz observes that the exorcists who performed Šurpu were not tied to one specific institution, but could be hired by individuals (often the king). The exorcists assumed the identities of both the supplicant and deity (Marduk), thereby bringing the patient into the divine realm for intercession and bringing divine realities to bear in his or her life. In Chapter 5, Cranz explains that Mesopotamian exorcists had relatively little involvement in the maintenance of temples. Instead, Šurpu was performed outside the city in places where deities resided, such as riverbanks and the steppe.

In the last three chapters (chs. 6–8), Cranz focuses on sacrifice and purification in the Priestly material. Cranz begins this section (ch. 6) by demonstrating that the priests functioned as mediators between the divine and human realms. They fulfilled this role because they were bound to God’s sanctuary and thereby became holy. In chapter 7, Cranz demonstrates that the sacrificial practices of Lev 4–5 closely parallel ritual activities in Šurpu. Yet, while both Šurpu and Lev 4–5 contain rituals performed for the benefit of the individual, the biblical rituals also serve the community as they mitigate God’s wrath and preserve his habitation in the sanctuary. Finally, in chapter 8, Cranz applies the results of her work to the interpretation of Lev 14. Scholars regularly argue that the ritual for the restoration of one suffering צָרַעַת (“skin disease”) contains foreign elements hostile to the Priestly system and that the lack of any connection between sin and pollution in the chapter indicates the monotheistic agenda of the Priestly writer. Cranz rebuts both points, arguing instead that Lev 14 focuses on the role of the priests in preserving the sanctity of the sanctuary, without any clear agenda subverting foreign practices or advancing monotheism.

Cranz’s comparative project largely succeeds in advancing two of her three conclusions. She successfully argues that Priestly ritual emphasizes the role of Aaronide priests in maintaining God’s presence in the sanctuary. This claim is hardly controversial, since numerous other scholars agree with Cranz that the role of the priests was (among other things) to purge the sanctuary of impurity and sin so that Yahweh could continue to reside among his people (see, e.g., Jacob Milgrom, Leviticus 1–16, AB 3 [New York: Doubleday, 1991], 254–61; Tikva Frymer-Kensky, “Pollution, Purification, and Purgation in Biblical Israel,” in The Word of the Lord Shall Go Forth, ed. Carol Meyers and Michael O’Connor [Winona Lake, IN: Eisenbrauns, 1983], 399–414, esp. 406; Roy Gane, Cult and Character [Winona Lake, IN: Eisenbrauns, 2005], 324–33). Nonetheless, the comparison with Šurpu proves enlightening because it demonstrates that ritual professionals in Mesopotamia were not always attached to temples and regularly performed rituals in the periphery. In other words, the Priestly text focuses on the sanctuary (and community), whereas Šurpu focuses on the individual. Cranz’s second argument, that Priestly ritual does not polemicize against foreign practices or advance a monotheistic agenda, is considerably more controversial, but remains convincing. Cranz’s comparison with Šurpu demonstrates that Priestly ritual shares a great deal in common with other ancient Near Eastern traditions. Further, Cranz shows that, instead of advancing a monotheistic agenda by separating suffering from sin (and thereby eviscerating the role of demons in human suffering), Leviticus 14 focuses on the priestly work of purification necessary to fulfilling their role of keeping the camp pure. Only when Cranz sees Priestly ritual advocating the claims of Aaronide priests against the Levites does her argument falter. Regardless of one’s perspective on the existence of intra-Pentateuchal polemics between different priestly groups, Cranz’s comparison of Priestly ritual with Šurpu fails to shed new light on the subject. Instead, Cranz depends entirely on evidence from within the Hebrew Bible to make the case for conflict between Aaronides and Levites.

This stimulating study should prove helpful to anyone interested in situating biblical ritual in its ancient Near Eastern context.