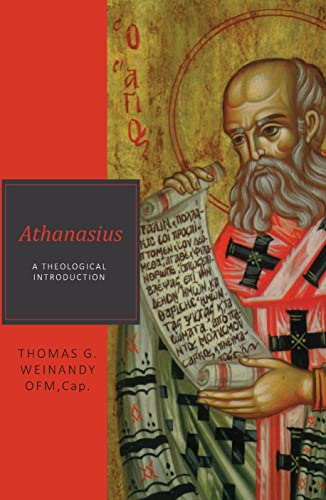 Weinandy’s book introduces us to Athanasius’ theology from the perspective that “the whole of Athanasius’ theological programme is thoroughly soteriological” (p. vii). He reads the Bible and therefore works out his theology “from beginning to end, as the historical narrative of the economy of salvation, that is, of God’s providential actions, beginning with the act of creation and culminating in the redemptive actions of the Son of God incarnate” (p. 11). Weinandy could just as well have titled the book Athanasius: His Soteriological Theology.

Weinandy begins the book with a brief but helpful survey of the main features of the bishop of Alexandria’s rather tumultuous life and then turns in chapters 2 and 3 to an exposition of the two-part Adversus Gentes. Part one of this work, Contra Gentes, seeks to refute a number of pagan errors in such a way as to develop an integrated account of the one God and his creation (and the origin of evil) through the relation between God and his Word on the one hand, and God’s creation and sustaining thereof through his Word on the other. The whole, as Weinandy understands it, is thoroughly oriented towards establishing the knowledge and communion humankind is designed to have with God. These developments, centered on the Word of God, clearly set the stage for the second part of this work: De Incarnatione.

Weinandy proceeds to develop Athanasius’ soteriology, emphasizing the Son of God as the bond between the two works and the consequent conjunction of protology, soteriology, and eschatology. Summarizing the Athanasian “dilemma,” he carefully follows the argument of the book, noting that Athanasius develops Christ’s life and work from incarnation to ascension as a soteriological whole. He concludes by noting the role of the full divinity of Christ, the recurring question of whether the Son merely takes on a human body, and the problematic absence of the Holy Spirit in the argument.

In the fourth chapter, Weinandy steps back to look at the big picture, summarizing Arius’ theology, the Nicene Creed, and Athanasius’ interpretation of the Creed. In this account Weinandy repeatedly emphasizes the basis of Athanasius’ argument in the Creed’s affirmation of the one God as Father, which in turn serves as the grounds upon which to affirm that the Son is homoousion with the Father. Soteriology is still the dominant concern, however, as Weinandy notes in the conclusion that because God’s being is precisely that of the Father begetting the Son, Athanasius has a foundation in the being of God for the creative act through the relationship between begetting and creating. This in turn links the being of God and the saving work of the incarnate Son, as a matter of fulfilling his original creative purposes (p. 79). The Trinity is the basis for creation and the incarnation, and the incarnation is the means of our salvation or the fulfillment of creation through relationship with the Trinity.

In the fifth chapter, Weinandy develops Athanasius’ incarnational soteriology by noting three essential features of his Christology, developing in particular the nature of the “becoming” in question. This development guides us into a further dialogue with Arius and the questions of the communication of idioms and of the soul of Christ. With this platform in place, Weinandy returns to his central concern, expanding on Athanasius’ understanding of salvation as deification. Weinandy offers a balanced and helpful treatment of this central subject, while avoiding a reductionistic emphasis on this one aspect of Christ’s saving work. He also notes that in this later stage of Athanasius’ thought, the Holy Spirit begins to play a more significant role in his account of deification. In the next chapter, Weinandy turns his attention directly to the question of the divinity of the Holy Spirit through Athanasius’ theological development. Weinandy explores this change, largely through an exposition of Athanasius’ Letters to Serapion, noting both the Trinitarian and soteriological aspects of his theology of the Holy Spirit.

The seventh chapter wraps up Weinandy’s development of Athanasius’ soteriology by delving into the latter’s Festal Letters and Life of Antony. This enables him to examine “some of the foundational principles for appropriating the salvation of Christ and so living a holy life” (p. 129), such as our response of repentance and faith, the Eucharist, and various Christian vocations. It also enables him to examine Athanasius’ “perfect living illustration” (p. 129) of the holy life, as seen in Antony.

The concluding chapter examines the contemporary significance of Athanasius’ theology in a number of areas, including Scripture and doctrine, the mystery of the Trinity, the authority of biblical language and the question of the communication of idioms in the incarnation. Given the consistent emphasis on Athanasius’ soteriology throughout the book, Weinandy’s conclusion strikes a discordant note, failing to explore the contemporary significance of Athanasius’ primary theological concern to a matter of great contemporary interest: the doctrine of the atonement. Such a consideration would have been a fitting conclusion to the dominant theme of the book as well as a valuable contribution to current debates.

A second minor weakness of the book lies in Weinandy’s insistence that Athanasius does not develop the causal link between the cross and its various effects. While the general point may in fact hold true, the work of F. M. Young and G. D. Dragas would suggest that Weinandy could have gone a little further in this direction in the exposition of Athanasius’ thought.

Weinandy’s introduction to Athanasius is an important work, familiarizing the reader with Athanasius’ life, writings, and fundamental concerns. Throughout the book the centrality of soteriology clearly emerges, whether the topic is the doctrine of the Trinity or the life of Antony. The whole serves to elevate the significance of On the Incarnation both in Athanasius’ thought and in the history of theology as a work of great genius on the central concern of the Christian faith. Hopefully this book will serve to bring Athanasius’ soteriology more prominently into contemporary discussions alongside the other great masterpieces on this doctrine.