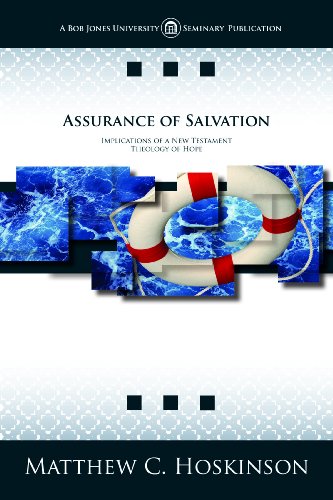 Assurance of Salvation: Implications of a New Testament Theology of Hope

This volume represents Hoskinson’s dissertation written at Bob Jones University. Hoskinson examines a matter of perpetual interest in considering the theme of assurance relative to salvation. Hoskinson begins with an introduction where he specifies his purpose and method for the book. Chapter 1 consists of a helpful and illuminating historical survey on the doctrine of assurance. Obviously, the history is selective, focusing on the contributions of Roman Catholicism, Luther, Calvin, and Wesley. Aquinas and Rome argue that those who claim assurance of salvation are presumptuous, unless God grants them such by special revelation (which is highly unusual). Luther and Calvin both maintained that assurance was of the essence of faith, while also acknowledging that believers could grow in assurance and may sometimes struggle with a lack thereof. Wesley argued that believers may be assured today of their right standing with God but must not presume that they would be saved on the final day.

Chapter 2 surveys contemporary views on assurance. The “present only view” of assurance, which picks up Wesley’s thought, maintains that one can be confident today that one belongs to God. Nonetheless, apostasy is a possibility in the future, so believers cannot be certain that they will be saved on the last day. Hoskinson labels the second view “the time of conversion view.” Scholars who propound this view say that assurance is of the essence of saving faith, focusing on the promises of God to save his people. Works have no place at all in terms of final salvation, but those who do good works will enjoy God’s blessing during their life on earth. The third view is identified as “the composite view.” The composite view, unlike “the present only view” teaches that one can have certainty of final salvation. In that sense it is similar to “the time of conversion view.” It also argues that the fundamental grounds for assurance are God’s promises. But this view differs from “the present only view” by insisting that perseverance and the bearing of fruit are necessary for salvation. Christ is the only basis of assurance, and so works are not the basis of salvation but are a means of assurance.

Hoskinson defends the composite view in the remainder of the work by exploring the theme of hope in the life of Abraham, hope in the NT historical books, hope in Paul’s writings, and hope in the General Epistles. Hoskinson helpfully exegetes these texts, showing that hope is fundamentally based on God’s saving work and his promises. At the same time endurance in faith is necessary for salvation. Only those who continue in faith and obedience will receive the final reward of eternal life. In the conclusion the author argues that the composite view best represents the teaching of the NT. He clarifies that God’s promises are fundamental and primary in terms of assurance. Persevering faith and obedience are a result of the salvific work of Christ and therefore are “a secondary—but necessary—means of assurance” (p. 203). The writer includes an appendix where he argues that assurance is of the essence of saving faith, but such a conclusion does not rule out the truth that believers can grow in assurance.

Hoskinson’s dissertation is an excellent survey of the biblical teaching on assurance, and I would argue that he also convincingly defends the composite view. He carefully summarizes the various views and exegetes the biblical text, and he synthesizes the various positions well theologically. Few scholarly studies treat the issue of assurance well, and Hoskinson’s study is a needed and insightful contribution. The numerous tables in the book pictorially summarize the argument and make the book user-friendly. Hoskinson probably ties his study too closely to the word “hope,” since there are texts where hope is featured but the term is missing (e.g., Rom. 8:31–39). He could have more clearly pointed out that hope is not only based on texts where the word occurs. On the other hand, no study can cover everything, and so the lacuna in this area is not a major weakness. On occasion Hoskinson overemphasizes the tenses of verbs, arguing that a present tense refers to a present time and aorist to past time, etc. Such conclusions may be legitimate contextually, but Hoskinson does not show awareness of recent studies in verbal aspect, and so readers may be suspicious of arguments based on the tense of the verb. But this minor quibble does not affect the fundamental thesis of the book. The quality of research is high and the conclusions drawn are convincing and pastorally important. Hoskinson nicely balances both the indicative and imperative, maintaining delicately the tension between God’s saving promises and the need for enduring faith. We can look forward in the future to further scholarly contributions from this gifted young scholar.