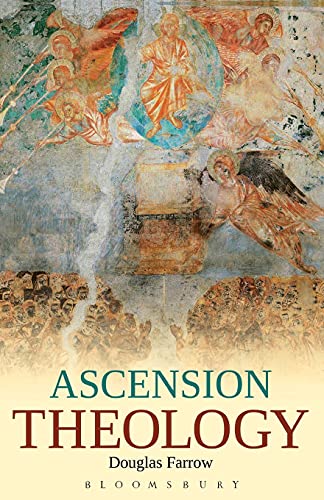 The ascension of Jesus into heaven has long remained the theological footnote intended to supplement the significance of the life, death, and resurrection of Jesus. Douglas Farrow seeks to remove the ascension from the shadows and place it anew at the forefront of NT theology. Farrow brings his extensive expertise regarding the ascension to bear in his new monograph Ascension Theology, a more accessible and updated version of his lengthy work Ascension and Ecclesia (1999). Chapter 1 introduces Farrow's main interpretive framework for the ascension, namely, the consistent “pattern of descent and ascent” (p. 2) throughout the Scriptures. For Farrow, the ascension of Jesus “is the proper outcome of his messianic career” (pp. 7-8), and this upward call to the Father “is [subsequently] freely extended to all who are near and all who are far off” (p. 10), most clearly seen in the eucharistic assembly of the church.

In chapters 2-3, Farrow analyzes the two main viewpoints, historically speaking, of ascension interpretation: the ascension of the mind and the ascension of the body. Origen argued that the upward call of God “is to ascension of the mind, since only the mind is capable of participation in the Logos” (p. 20). This medieval belief was resurrected in the modern period with Schleiermacher, Kant, and Hegel, theologians who contributed to the belief in the ascent of man and the marginalizing of the human Jesus. Chapter 3 turns to the church's belief in the ascension of the body. Irenaeus is the “first witness” of this approach, interpreting it in trinitarian terms and defining ascension as “deification” (p. 36). Farrow claims that Jesus' bodily ascension guarantees man's “transformative relocation by the Spirit” into the “open horizons of the trinitarian life and love, where he may flourish and be fruitful in perpetuity” (p. 36). This perspective reveals both what God did to Jesus (and us) in the ascension as well as where God placed Jesus (and us)—at the right hand of God, where he belongs.

Chapters 4-7 shift from the historical tracing of the theology of the ascension to the present-day understanding of the ascension and its effect upon the church. Farrow claims in chapter 4 that the identity of Jesus has “been fairly occluded through” liberal ascension theology that has produced a Jesus who is “whoever we need or desire him to be” (p. 53). Jesus' identity as seen in the ascension should be answered as it was among the inchoate communities of believers in the first century: Jesus is Lord. The church's responsibility is to faithfully follow, like Israel after Sinai, in the midst of Jesus' absence.

Chapter 5 elucidates the connection between the ascension and the eucharist. The eucharist has been left behind as a way to access the ascended Lord, as a witness to the world of the reordering of God found in the ascension, and as the means by which we participate in the heavenly offering presented by Jesus to the Father. Chapter six applies this ascension-based position on the eucharist. As Farrow states, “The celebration of the eucharist is always a political act” because the kingdom of God is constantly being brought to bear upon the kingdoms of the world (p. 90). Farrow inquires into the ways in which the “politics of the eucharist” engage numerous historical, philosophical, and religious figures and events, from Islam and German fascism to human rights and democracy. Ultimately, the eucharist is the antidote for the age of lawlessness in which the church finds itself, for “in the eucharist both body and soul are claimed by the one who ascended in the flesh to the right hand of God” (p. 118).

In the final chapter, Farrow attempts to place the ascension into the realm of salvation, that is, as an act of “saving” and “perfecting grace” (p. 122). Because Jesus ascended into heaven, he appears before God on behalf of his people and purifies heaven so that they might approach God. The theology of the ascension also anticipates the eschatological descent and ascent of the risen and ascended Jesus, in which he will descend to judge the earth and ascend with his people into the presence of the Father. Those who believe in the ascension ought to live in light of and wait expectantly for this final act of descent and ascent.

Ascension Theology helpfully illuminates both the ascension's theological priority as well as the scope of the descent-ascent motif throughout the Scriptures. Readers of Farrow's book will also benefit from the example Farrow sets in engaging the contemporary world with the theological truth claims found in the ascension. While Farrow himself admits that he has overlooked a great number of things in his book, Farrow's audience would greatly benefit from a deeper engagement with the biblical texts pertaining to the ascension (not to mention the prevalence of ascension accounts in Second Temple Jewish and Greco-Roman literature) before moving to an application of the ascension's theology. Farrow's failure to more extensively engage these texts causes their additional, if not primary, theological significance to remain largely ignored. Finally, while I find his discussion of the eschatological import of the eucharist engaging, his connection between the ascension and the eucharist seems dubious at best. More importantly, the latter half of the book seems to be more concerned with the eucharist (and other issues important to Catholic theology) at the expense of the ascension, an inexcusable flaw in a book on ascension theology. The ascension certainly has much to say theologically, but boxing these insights into a Catholic framework severely limits Farrow's assessment. Despite these criticisms, Farrow's monograph rightly restores the ascension to the realm of theological import and will hopefully promote further ascension research and engagement in the church and scholarship in the years to come.