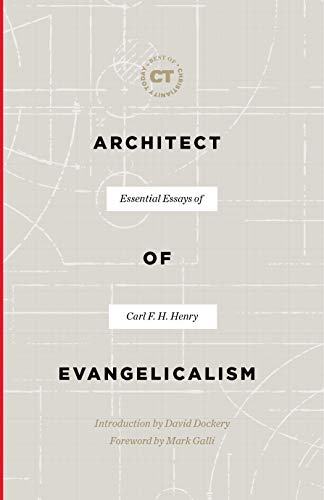 To speak of a Carl Henry renaissance would be an overstatement. But out of the theological and historical books published in the last ten years, there is a growing interest in his life and legacy. The evangelical journalist and theologian, Carl Ferdinand Howard Henry (1913–2003), has been called “the brain(s) of the evangelical movement,” even “the indispensable evangelical.” Although he certainly would have dismissed these notions, Henry was a driving force of neo-evangelicalism after World War II. Among other things, he served as the founding dean and the first professor of theology at Fuller Theological Seminary, and as the founding editor of Christianity Today (CT). He spoke extensively at numerous institutions worldwide and was a dear mentor for many evangelical leaders. Architect of Evangelicalism seems a fitting title.

The book consists of thirty-three essays written by Henry, which were published between 1957 and 1989. A foreword by Mark Galli (editor-in-chief of CT) and an introduction by David Dockery (former president of Trinity International University) winsomely help the reader to grasp Henry’s vision, relevance, and time. The essays are grouped into four parts.

The first part, “Defining Evangelicalism” (pp. 11–88), treats foundational issues. Here Henry traces the theological and historical kernel of fundamentalism, liberalism, and neo-evangelicalism as movements. Moreover, he expounds the programmatic vision of evangelicals and pleads for a convictional unity and collaboration. Henry also addresses the governing principles for social action, the evangelicals’ identity, their view of Scripture, and their drawbacks and opportunities over the years.

In part 2, “Evangelicals and Modern Theology” (pp. 91–213), Henry offers an integrative view of redemptive revelation in response to a then-important, but problematic publication. He also assesses Europe’s influential theologians, Neo-Protestantism, the fragmented theological liberalism, and the 1960s God-is-dead wave. Looking back in time, Henry’s analyses of the theological scene and their ever-changing trends prove to be quite outstanding.

Interestingly, Henry thought and wrote a lot about learning, while intentionally challenging the one-sidedness of both pietistic anti-intellectualism and secular rationalism. His articles in part three, “Evangelicals and Education” (pp. 217–62), cover a wide range of topics: the Christian responsibility in education, its strategic role in society, the idea of a Christian research university, the urgent tasks of Christian colleges, and the confessional orientation in theological education.

In part four, “Evangelicals and Society” (pp. 265–371), Henry connects a multi-faceted cultural analysis with theological thought and practical proposals for solution. Among other things, he discusses the increasing secularization of the West and the modern ideas of human rights, love, morality, democracy, truth, and meaning. He also writes about the nature and means of Christian influence upon society, the generational conflicts inside the evangelical milieu, and the risks of a biased political involvement.

The book concludes with a tribute written by Timothy George (Beeson Divinity School) in 2004, and with a moving editorial by Henry on how God called him to repent and accept the gospel of Jesus Christ. While the Scripture index is short, the book’s extensive subject index helps readers to track and deepen specific topics.

Architect of Evangelicalism catches the comprehensive concern of its protagonist. In eventful times, Henry tried to cast a unifying evangelical vision, combining faithful theological reflection with a responsible course of action. He did not merely present a middle course between the Protestant fundamentalism and liberalism of his time. Instead, together with many others, Henry strove to awaken the evangelical mind and heart in commitment to God’s glory and the well-being of others.

Admittedly, essays in themselves have their limits and may vary in their coherence, depth, and persuasiveness. Because of the complex themes, Henry sometimes unfolded his arguments in a series of editorials. On other occasions, he responded rather concisely to immediate developments, while uncovering the deeper significance of those events. Some more footnotes, references to other works, or a list for further reading might have added to the book’s usefulness.

From a historical point of view, the book is a superb collection of primary sources for further research on the life and legacy of Carl Henry. It embodies the questions, concerns, and historical struggles of the American neo-evangelical movement in the second half of the twentieth century. In addition, students will find an accessible introduction to Henry’s work and method, before reaching out to other monographs.

Beyond a scholarly interest, attentive readers will spot the timelessness of the many topics. Henry’s combination of sincere evangelical piety with a serious evangelical worldview, in the light of contemporary challenges, is exemplary. In many ways, his essays present evangelicalism at its best and can serve as a basis for discussion, or perhaps even as a corrective, to some trends of our time. Henry points both skeptics and sympathizers to Christ and invites them to consider the momentous convictions of the global evangelical tradition and their churches. In summary, Architect of Evangelicalism is to be commended and will hopefully encourage, inform, and equip many present-day readers.