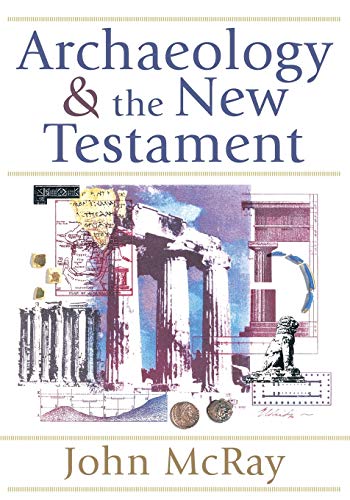 Archaeology and the New Testament

Dr McRay’s goal is to show how the study of the NT is enlightened by the study of archaeology, which is defined broadly as the study of all the material remains of the world the NT writers addressed.

The book is at once very detailed and well organized. A 17-page introduction details the techniques of archaeology at the end of the 20th century, as well as its uses and limits for the study of the NT. The body of the work, pages 37–375, is divided into 11 chapters, grouped into four topical sections. Part 1 introduces the typical architecture of the Roman Empire, including urban geography and public buildings, such as theatres and baths, private homes and religious buildings. With Part 2, on Herod the Great and his constructions, we begin to deal with NT archaeology proper. Chapter 3 is on Herod’s Jerusalem, while Chapter 4 tells of his ambitious works elsewhere, both within his kingdom and abroad.

Part 3 shows how archaeology illuminates the gospel accounts of Jesus’ life in Galilee and Judaea. Thus McRay discusses the census in Luke’s gospel (pp. 154–155), including the dates of Quirinius, who ordered the census, and introduces several census papyri from Egypt. Pages 204–206 give archaeological evidence on the details of crucifixion.

Part 4 deals with the early church and archaeology. After chapters on cities of Asia Minor, Athens, Corinth and Rome, McRay deals with the excavation, not of buildings and towns, but of ancient documents, early copies of the NT and related works. This chapter is particularly useful to the student, since most popular works on archaeology overlook the discovery of documents. The book ends with detailed endnotes, five tables (archaeological periods, Greek and Roman gods, Nabataean kings, Roman emperors and rulers of Judaea, and NT papyri from Oxyrhynchus), a good six-page glossary, and a ten-page index.

McRay is a skilled and experienced archaeologist as well as a NT scholar. This is evident in his efforts to show how the physical remains of the Roman world explain various NT problems. For example, each of the synoptic gospels mentions the story of the Gadarene swine, but textual variations leave it unclear whether the incident is set in Gadara, Gerasa or Gergesa. All three towns are in the same general area, east of the Sea of Galilee, and all have similar names in Greek. McRay details the issue on pages 166–168, giving six reasons for choosing Gergesa, the modern el-Khursi, as the proper site. This attention to detail and to explicate the NT text is found throughout the work. A good photo of the early Byzantine church on the site illustrates the text. McRay’s book is blessed with many well-chosen illustrations and diagrams, all coordinated with his text.

McRay is Professor of New Testament at Wheaton College Graduate School, Wheaton, IL. His attitude toward the NT is that of an evangelical Protestant, without being obtrusively denominational. He discusses issues of interest to Catholics, such as the Shroud of Turin (pp. 218–221) and the burial place of Peter (pp. 347–348), with courtesy and the same thoroughness he gives to all his topics. The work assumes that the reader is familiar with the history of the Roman Empire and of the hellenized Middle East. For that reason Archaeology and the New Testament is best suited as a text for introductory theological students with some background in ancient history. Overall, it is an excellent introduction to the material world of the NT, and useful as a reference as well.