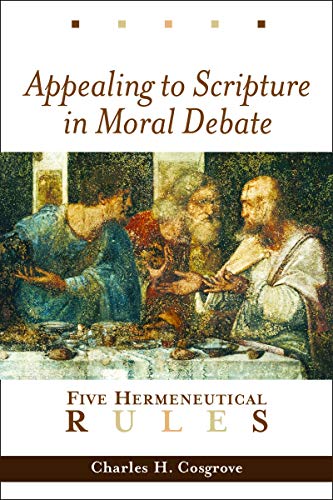 Written by Charles H. Cosgrove Reviewed By Noel Due
Ethics and Pastoralia

All of us are involved in making ethical decisions, judgements and evaluations every day. For Christians, especially evangelical ones, the desire is to make judgements that we believe to be biblical. Christians will frequently suggest that their stance on a particular issue is the biblical one, and look askance at others who do not share the same view of that issue. But on what basis have we concluded that our particular stance is the biblical one?

In this valuable book, Charles Cosgrove forces us to think about our thinking, especially as we attempt to appeal to Scripture in ethical discussions. The connection between one’s ethical position and the Scriptures is often unarticulated. Cosgrove is particularly interested in these, the ‘tacit hermeneutical assumptions at work in appeal to the Bible as Scripture’ (Introduction, his emphasis). The book discusses five common hermeneutical assumptions, which he calls ‘rules’, since ‘they state certain norms for valid use of Scripture in moral argument’ (Introduction). In undertaking this task, Cosgrove is not inventing his own systems of interpretation, but describing what commonly occurs. He summarises the rules as: The Rule of Purpose; The Rule of Analogy; The Rule of Countercultural Witness; The Rule of the Nonscientific Scope of Scripture; and the Rule of Moral-Theological Adjudication. These form the headings for the five main chapters of the book. Cosgrove’s ultimate aim is:

not to recommend or reject this or that specific rule formulation but to encourage close examination of what we are actually doing, by virtue of shared assumptions, when we appeal to the scripture in moral argument. (181)

For each rule, Cosgrove summarises what the rule describes. For instance, the Rule of Purpose: (‘The purpose [or justification] behind a biblical moral rule carries greater weight then the rule itself.’ p. 12), describes how the rule operates (in terms of underlying assumptions). He then goes on to illustrate the rule with a number of examples. Such examples are all carefully framed and are drawn from a range of historical and contemporary debates, as well as from a range of theological positions. In addition, the author shows the strengths and limitations of the positions he describes, concluding each chapter with a succinctly written summary and assessment.

The book does great service to the Christian community in forcing us to think though the methods we have often unconsciously adopted in thinking about ethical issues. It is written with great clarity and care, leaving no room for the reader to hide in the realms of ambiguous thinking. The incisive logic of each chapter takes the reader to the heart of the ethical/hermeneutical nexus, and forces reconsideration of one’s own position. In so doing it admirably fulfils the author’s aim.