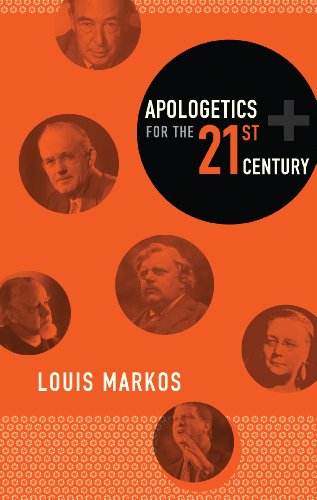 Apologetics for the Twenty-First Century

Louis Markos gives us his purpose for writing and his basic outline in one statement: “In this book I will survey both the major apologists and the major arguments that have come to the defense of historical, orthodox Christianity over the last century” (p. 11). The first half of the book introduces the modern apologists that Markos considers most significant: C. S. Lewis, G. K. Chesterton, Dorothy Sayers, Francis Schaeffer, and Josh McDowell. The second half of the book addresses a litany of apologetic arguments and issues: the classical proofs, evidences, theodicy, the reliability of the Bible (especially the Gospels), the liar-lunatic-or-Lord trilemma, the exclusivity of Christianity, the Gnostic Gospels, modern spirituality, intelligent design, and the new atheism. The final chapter recounts Anthony Flew’s late-life embrace of deism. Markos also includes three helpful appendices: a glossary of apologetics terms, a Who’s Who of prominent figures in recent apologetics, and a wide-ranging annotated bibliography. The book is not indexed.

As a survey, Markos’s book is quite useful; his biographical and topical structure allows him to address a host of issues while writing a coherent book. While it is not possible in a book of this size to attempt to cover each apologist and every argument in great detail, Markos offers his reader a commendably complete picture of the current apologetic landscape. Markos does, at times, appeal directly to the unbeliever to consider the arguments and evidence; in the main, however, his survey would be most useful to the beginning student of apologetics.

Without question, the leading figure in the book is C. S. Lewis, who is, in Markos’s estimation, the chief apologist of modern times: “Lewis made it possible to be an intellectually fulfilled Christian while still living in a modern, post-Enlightenment world” (p. 23). Six of twenty four chapters are specifically about Lewis, and Markos’s deep appreciation for Lewis is apparent in most of the rest. Lewis’s own writings are always compelling, and Markos’s enthusiasm for and thorough understanding of Lewis’s apologetic make the chapters on Lewis (and his thought-world companions Chesterton and Sayers) especially enjoyable.

Opting for Lewis as an apologetic mentor, however, is not without risks. When Lewis defends mere Christianity, Christians everywhere claim him as their spokesman. Lewis manages to be such a winsome and effective communicator that Christians are willing to overlook the occasions when he dismisses or discounts their distinctive doctrines. Unfortunately, when a less masterful writer than Lewis (and who isn’t?) attempts to defend mere Christianity, he runs the risk of alienating each branch of Christendom in turn. Many Protestant readers, for instance, will be less than comfortable with Markos’s implicit endorsement of Roman Catholic apologists.

Further, Markos’s work is sullied by a number of peculiar claims, many of which stem from his dependence on Lewis’s own uneven theology. The most significant of these is his apology for hell, which seems rooted in a commitment to the privation theory of evil (p. 34). If the privation view is correct, to the degree that a thing is less than good, its existence is diminished; assuming this, “Hell does not violate Christ’s call to love sinners, for there are, ultimately, no ‘sinners’ in hell—all that there are in hell are sins going on forever and ever. . . . What is cast into hell, Lewis warns us, is not a sinner but the remains of what once was a sinner” (p. 61). This defense of hell seems unsubstantiated by any biblical depiction of the future state of unbelievers.

Others of Markos’s dubious statements cannot be laid at the feet of Lewis. For instance, he says that many of us have been “inspired” to “write down [revelations from God] in a book and share them with others” (p. 39). Some may feel uneasy at the employment of the language of inspiration here. In another place he writes, “God became a man in Jesus, and as such, he became also a fetus, a zygote, and a sperm!” (p. 54). I fail to see how any orthodox statement of the incarnation entails Jesus being a sperm.

Despite these missteps, if we are to evaluate his book on the basis of his purpose statement, Markos’s work must be judged a success, albeit with one notable qualification: his almost complete neglect of the apologetics of Cornelius Van Til. Van Til is discussed only as an influence on Francis Schaeffer (pp. 105–6); Markos’s rationale for not giving Van Til any further attention is confessedly pragmatic. Markos is entitled to his commitment to evidentialist apologetics, but a Who’s Who of twentieth-century apologists that leaves unmentioned Cornelius Van Til, John Frame, and Greg Bahnsen may undermine its own authority.