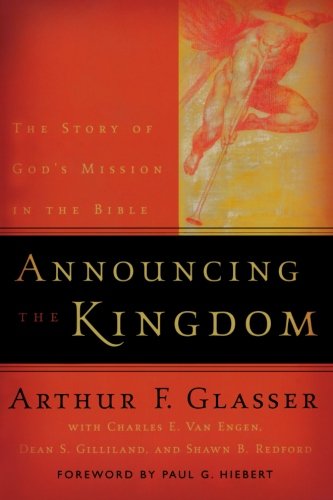 Arthur Glasser has wide experience in Christian mission, as a chaplain in the US navy, as a missionary in Asia, and finally as Dean of what used to be called the School of World Mission at Fuller Seminary. This book reflects lessons learned and insights gained during this long and illustrious lifetime—indeed, an earlier draft of it was produced by Fuller as a textbook for a course entitled ‘Biblical Foundations of Mission’, a phrase which describes its content more accurately than the title the book has now been given.

In some places the book offers a commentary on very specific Bible passages, while in others it describes events and personalities in a way that is more often found in a Bible history book. It engages with many different theologians while also being interspersed with comments about contemporary church life. All these apparently disparate strands are held together by the conviction that the Bible is central to effective Christian faith and witness, and that when read through the spectacles of missiological engagement it often challenges our preconceptions, even those held on apparently ‘Biblical’ grounds.

It is in effect a retelling of the story from a mission perspective, and as such provides an invaluable overview that will be particularly helpful to those with only a sketchy prior knowledge of the biblical narratives. Glasser takes it for granted that the Bible offers a continuous and credible metanarrative, focused on the missio dei in which God’s people of all generations have been called to share. It is reminiscent of the attempts by previous generations to create a ‘Biblical theology’, and like them it tends to place most emphasis on a historical story line. If there is a criticism to be made of this work, it would be that it appears to exist in a world that has now passed away, and in which it could be taken for granted that history makes sense. Arguably, a missiological framework for today needs to engage primarily with the concerns of a post-modern generation that have lost faith in metanarratives (surprisingly, as far as I can see there is only one reference to post-modernity in the entire book, and that only in a passing comment). The Bible does offer effective resources for the emerging cultural context, not least through the Wisdom literature, but the exclusive emphasis on history here means that such books receive little attention. Though there is some recognition of the culture of the Biblical world, the cultural context in which actual mission takes place today is largely ignored, whether it be post-modern Western culture or developments in the non-Western world. Glasser might reasonably respond that the book is not meant to be about culture, but about God and the Bible, but that in itself begs big questions about the nature of incarnational mission—another theme mentioned only once, and defined somewhat blandly as ‘serving others’ (201).

Read and value this book for what it is—a Bible survey with a missiological spin—while recognising that the missio Dei itself is likely to be more far-reaching, and more personally challenging for those who would be an effective part of it.