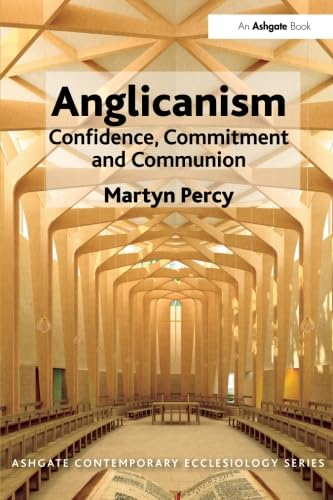 This work on Anglicanism is part of the Ashgate Contemporary Ecclesiology series. The author, Martyn Percy, from Ripon College Cuddesdon in Oxford, UK, is one of the series’ editors. The chapters comprising this book began as lectures or articles, most of which have been published elsewhere. They contain reflections on Anglican identity, mission, and ministry that are primarily rooted in the Church of England. As the heart of Anglicanism, happenings and writings from the Church of England will always carry a certain weight for the worldwide Anglican Communion (which is the largest Protestant fellowship in the world). However, the relevance of this book for the Anglican Church (and emerging Anglican movement) in the United States is limited by the narrow focus of the book. It is not that one cannot gain important and transferable insights. In fact, the book is full of scholarly analysis and penetrating insight. Much of it is beautifully written, and there is genuine Christian wisdom found throughout. But it does not prove as helpful to understanding Anglican mission and ministry in the US as one might hope.

Percy believes that his reflections, informed by approximately ten years of life at Cuddesdon, can “offer insight and illumination, and highlight how rich and reflexive the Anglican tradition can be in preaching and proclaiming Christ” (p. 6). This kind of example may prove necessary in light of current struggles in the Anglican Church. “Debates on sexuality and gender (women bishops), whether the church has a Covenant, or can be a Communion, how it is ultimately led, are issues that have dominated the ecclesial horizon for several decades now” (p. 6). Percy’s approach in this study is “binocular” in that he synthesizes a theological approach with a sociological/anthropological approach. This method serves the study well and brings weight to his analysis. But since most of the research is based upon figures in the UK, it is most applicable to that context. One will find similar situations in the US, but a reader will have to work out those applications on their own because they are not directly addressed in the book. Only one chapter significantly addresses the Anglican situation in America. I will address it below.

The book is organized into three main sections. Part one, “Confidence in Formation,” addresses theological training, formation for ministry, and reflections on sacred space. Part two, “Commitment and Mission,” deals with the parish model church, generational change, National Church issues, and offers a “Critique of Fresh Expressions.” Part three, “Communion and Polity,” discusses leadership in the Church, the American situation, The Windsor Report, and some thoughts on the future of the Church following the most recent Lambeth Conference. The book concludes with some pastoral reflections on the church’s identity and leadership, under the rubric of “blessing.”

In this short space I will comment on just two chapters that I find to be of particular interest. The first is a chapter in part two titled, “Old Tricks for New Dogs: A Critique of Fresh Expressions.” Fresh Expressions is a movement that “encourages and resources new ways of being church, working with Christians from a broad range of denominations and traditions. The movement has resulted in thousands of new congregations being formed alongside more traditional churches” (see http://www.freshexpressions.org.uk/). These church-like gatherings aim at impacting the society by being culturally relevant. However, Percy suggests that the movement is “a form of collusion with contemporary cultural obsession with newness, alternatives and novelty, rather than the recovery of a lost theological, missiological or ecclesiological priority” (p. 123). And again, “the Fresh Expressions movement may represent a conservative, therapeutic and individualist retreat from the world, whilst cloaked in a rhetoric that emphasises the very opposite of this: namely ‘cutting edge’, ‘radical’ and so forth” (p. 127). Percy is concerned that these sorts of fellowships, disconnected from the historic Church of England (or any other historic denomination), are too connected to consumerists’ impulses. With regard to the new forms of church that are emerging he comments, “new is not necessarily better than old; fresh is not necessarily superior to established; and effervescence is not a substitute for substance . . . innovation should be judged by tradition” (p. 130). Then he adds, in a pithy line, “‘emerging church’ is not likely to be superior to the emerged church” (p. 130). This is a great line. This is also a great chapter worthy of our consideration. Many feel the challenge of cultural relevance. But how might the church engage society without losing the historic treasures she has to offer? Percy’s critique is timely and astute. His work proves helpful on this subject.

However, I have trouble with his chapter in Part three, titled “Context and Catholicity: An Anglican-American Dilemma?” As an Anglican priest in America, I find it rather difficult to appreciate. In it Percy aims “to suggest that some of the current crises in Anglican identity are partly rooted in some of the un-surfaced cultural and contextual assumptions that shape American life” (p. 154). This sounds a lot like saying that America is Anglicanism’s problem, and that our cultural assumptions are somehow unknown to us, though apparently clear to one across the Atlantic. Some of these cultural characteristics include “the pursuit of happiness” and “self-improvement.” Many forms of Christianity in America are what he calls “user-friendly.” I agree with this, and I think many church leaders in our country are very well aware of it. To make things worse, Percy thinks that these cultural assumptions are more at the heart of Anglican dilemmas than issues of sexuality, which he regards as secondary and symptomatic. Percy speaks favorably of Gene Robinson (the openly gay Bishop of New Hampshire). Percy doesn’t think that the actions of the American Episcopal Church (TEC) are unproblematic; he just doesn’t like the fuss resulting from it. For Percy, “Anglicanism is mostly a temperate ecclesial body” (p. 157), that “catholicity” must be preserved, and the church must “live with difference and diversity” (p. 158). In a later chapter Percy advances a related notion, “In ecclesiological terms, if you have the choice between heresy and schism, choose heresy. You can correct the former; but it will always be difficult to ever heal the latter” (p. 177). For Percy, this is a typically Anglican way of handling issues. Great patience, discussion, diversity, politeness, and wide reach should all be valued above particular stances on culturally-conditioned disputes (as he understands the sexuality debate).

Although he never mentions the emerging Anglican movements in America, such as the Anglican Church in North America (ACNA), it appears that Percy would not appreciate these. Even if he has issues with the American Episcopal Church, he would not value the stance these movements have taken on important moral, cultural, and theological issues. The emerging Anglican churches might ordain women in some dioceses, but they are opposed to abortion and homosexual relationships. Groups like the ACNA see themselves as following in faithful continuity with historic Anglicanism in terms of polity, theology, and worship. However, the conversation has reached a breaking point in some parts of the Anglican Communion, such that continued shared identity is no longer possible without repentance and allegiance to scripture.

All in all, and despite the few problems I have with the work, Percy’s book deserves to be read for its mature and (in many ways) compelling insights. Readers will learn a lot and be driven to contemplation by a generally winsome voice. The book is especially valuable to those in the Church of England who desire to better understand, and be challenged, in their own context. One might forgive the author for not fully grasping Anglican issues in the US. And even if one is inclined to take hard theological positions on current disputes, Percy’s commendation of the spirit of Anglicanism as “passionate coolness” (Robert Runcie) is worthy of our consideration. No church should be quick to move to schism. But this is sometimes necessary if the very foundations of the house are beginning to crumble.