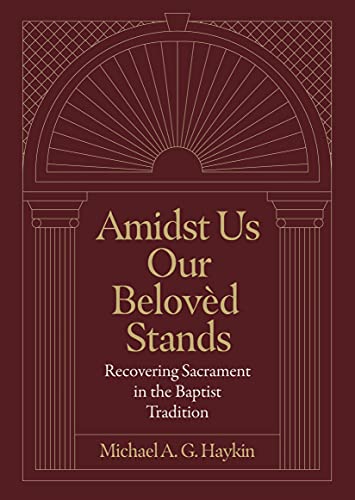 Historical theology is often viewed as a specialist’s field, and at times it certainly can be. Debates between theologians long dead and little remembered may seem hardly relevant to contemporary church life. But at its best, rather than delighting in obscurity for obscurity’s sake, historical theology offers us a window and a mirror: a window into the past, to glimpse the biblical and theological priorities and methods of a previous generation of faithful believers; and then a mirror by which to compare our own priorities, methods, and church life. In this way, historical theology provides a vital service to the contemporary church.

Michael Haykin’s book Amidst Us Our Belovèd Stands: Recovering Sacrament in the Baptist Tradition is just this kind of historical theology. In five chapters, Haykin surveys the role of the sacraments in the 17th and 18th century Baptist tradition, considering a number of controversies and debates regarding baptism, the Lord’s Supper, and church membership. While the chapters are short and easily followed, the background research is wide-ranging and thorough, giving evidence of Haykin’s considerable familiarity with the time period and figures involved.

Chapter 1 discusses the role of baptism in the Particular Baptist movement, focusing on the importance of baptism for this tradition and its relationship to church membership and identity. The First London Baptist Confession of 1644 features prominently, but Haykin also considers Baptist hymnody of the period. Quoting the 17th century Baptist Benjamin Keach, Haykin argues for the significance of baptism as “‘blessed food’ for the soul” (p. 14) for these Baptists.

Chapter 2 moves on to consider the Lord’s Supper in the 18th century, drawing especially on the Second London Confession of Faith to demonstrate that a Calvinistic view of the Supper was widely shared among Baptists of the era. Again, Haykin draws from both theological writings and hymnody to make a persuasive case. He also considers the shift to a Zwinglian view of the Supper that emerged in 19th century Baptists, arguing that “a major shift in British Baptist ecclesiology” (p. 53) lies behind this shift in sacramental theology. As 19th century Baptists became more evangelistic and mission-minded, the Lord’s Table seemed to play “little part in the evangelization of the lost” and so was less and less central in the life of the church (p. 55). Haykin aptly summarizes and evaluates this change in a single sentence: “It was a movement in which much was gained, but also something was lost” (p. 55).

Chapter 3 discusses debates over closed or open communion, focusing especially on the writings of John Bunyan (an advocate of open communion) and William Kiffen (who held to a closed communion position). As Haykin shows, however, this debate continued beyond Bunyan and Kiffen’s lifetimes and was a recurring feature of Baptist discussion in the 18th century. The arguments, while framed with various nuances, center on the question of whether those baptized as infants could be admitted to the Lord’s Table in Baptist churches (the open communion position), or whether such persons needed to undergo believer’s baptism before being welcomed into full fellowship (the closed communion position).

Chapter 4 considers the topic of “eucharistic piety” (p. 91) in the Baptist tradition, especially in hymnody but also in the writings of the Baptist laywoman Anne Dutton. Haykin’s aim is to demonstrate the central role the Lord’s Table played in the affections of these Baptist writers and their congregations. While Haykin does not explicitly make the connection, this chapter provides significant confirmation to his earlier claim that Calvinistic views of the Supper form a vital part of Baptist tradition (ch. 2).

In chapter 5, Haykin shifts from historical survey to summary and contemporary application by providing six theses on the sacraments in the Baptist tradition. The first two deal with the prominence of both sacraments to ecclesial identity and as means of grace, while the next two theses provide brief definitions of each sacrament. While delicately avoiding an explicit affirmation of a Calvinist view over a Zwinglian position, Haykin’s fourth thesis make clear that any view of the Supper in which it becomes incidental to the life of the church puts the believer at odds with historical Baptist tradition.

The fifth and sixth theses move even more directly to contemporary application. In the fifth thesis Haykin singles out the development of the “altar call” as a central part of 20th century Baptist as particular detrimental to an understanding of the sacraments—a fascinating example of historical theology as both window and mirror. His last thesis is worth quoting in full: “In modern Western society, as in the past, joyful participation in the sacraments of baptism and the Lord’s Supper in Baptist communities is a truly revolutionary act” (p. 121).

In an age of expressive individualism and the endless construction of the self, baptism and the Lord’s Supper are indeed revolutionary acts in which the church joyfully confesses that our identity is not a work of our own hands but a gift received in union with Christ, both corporately and individually. Amidst Us Our Belovèd Stands will help all pastors and theologians, whether Baptist or not, to consider our own understanding of the sacraments afresh in light of the past.