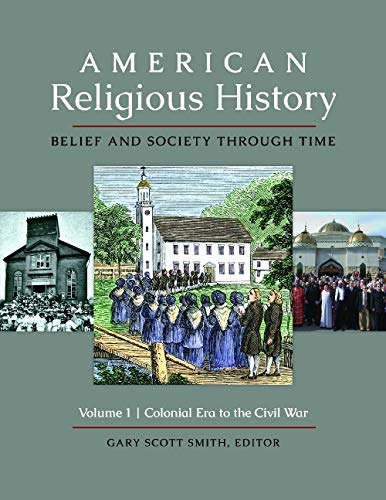 This three-volume reference set provides an accessible resource for upper-level high school students, undergraduates, and educated general readers first orienting themselves to the field of American religious history. It will also be helpful to historians whose specialty is in other sub-fields or scholars from other disciplines, e.g., the social sciences, who need a reliable source covering the various aspects of American religious history. Reflecting its historical approach, each volume covers a specified chronological period: Colonial Era to the Civil War, Reconstruction to World War II, and World War II to Present. Each of the volumes is comprised of ten thematic essays, encyclopedia entries, and primary source selections. Volume 1 also provides a helpful chronology and an introductory essay.

As indicated in the subtitle, American Religious History: Belief and Society through Time focuses on the intersection of religion and society from colonial times to the present. It pays special attention to how religious belief has shaped and engaged American culture.

The introductory essay presents six major characteristic themes which provide the categories for readers to think about religion writ large in America: pervasiveness, diversity, cultural impact, revivalism, social activism, and ecumenism. While experts might quibble with one or two—or suggest a seventh or eighth—it cannot be denied that, on the whole, these themes work well as organizing features of religion in America throughout its history.

The work takes a fairly traditional interpretation of the history of religion in America, albeit with important emendations. It is clear that neither Catherine Albanese nor Thomas Tweed or other scholars interested in “retelling U.S. religious history” edited these works, although the influence of that approach shows at points. Readers familiar with introductory works on American religious history by Gaustad and Schmidt, Hudson and Corrigan (and Porterfield), and Mark Noll will find themselves on familiar ground. These volumes are organized according to the traditional chronological intervals, breaking at the Civil War and World War II. In addition, they present Protestantism as the main shaping religious force in America with significant effects brought about by Protestant America’s encounter with Catholicism and Judaism (both get their own thematic essays in Volumes 2 and 3) while nodding to the greater diversity of American religion.

Taking Volume 2 as an example, the primary source choices illustrate this approach. Selections from Josiah Strong’s Our Country (1891), The Defence of Professor [Charles A.] Briggs before the Presbytery of New York (1893), and Rauschenbusch’s Christianity and the Social Crises (1907) represent the work’s focus on the development of White Protestantism in America while the inclusion of Henry’s McNeal Turner’s “God Is a Negro” (1898) maintains the commitment to fold African American religious history into the project. Beyond that, selections from three addresses delivered at the 1893 World’s Parliament of Religions in Chicago—on Buddhism, Islam, and Hinduism—reflect the growing awareness of the diversity of religion emerging alongside the “Protestant Empire” of late 19th century America, prefiguring the actual growth of those religious traditions in America after the Immigration and Nationality Act of 1965. To some degree, the series picks that story up in the articles on Buddhism, Hinduism, and Islam in Volume 3: World War II to the Present. Oddly, that volume does not include an entry on post-1965 immigration and religion, a topic that probably deserved its own thematic essay. In addition, thematic essays on “African Americans and Religion” and “Women and Religion” in each volume replicate a persistent challenge in the field, highlighting those important aspects of American Religious History while also isolating them from the larger story.

For the most part, while the essays appear to be based on up-to-date scholarship, some articles are lacking. It is not surprising that James P. Byrd’s recently-published work, A Holy Baptism of Fire & Blood: The Bible and the American Civil War (Oxford: Oxford University Press, 2021), is not included in the essay on the Bible in America, but other absences are a bit more disconcerting. For example, neither John Turner’s definitive biography, Brigham Young: Pioneer Prophet (Cambridge, MA: Harvard University Press, 2014) nor John Wigger’s award-winning American Saint: Francis Asbury and the Methodists (Oxford: Oxford University Press, 2009) are referenced as “further reading” in the entries for those seminal figures. Beyond that, the inclusion of David Barton’s book in the “Further Reading” recommendations for the entry on Thomas Jefferson is disconcerting.

The hardback version of American Religious History: Belief and Society Through Time is easy to navigate, making it immensely usable. Each volume follows the same organizational pattern and contains the Table of Contents for all three. However, the e-version presents some minor challenges. First, the controls and navigation of the native reader are a bit clunky. Second, while the pagination of the printed volumes is maintained on screen, the program frame provides sequential numbering that combines all three volumes. With the 50 pages of front matter, this means, for example, that the last page of the series is simultaneously numbered 388 (volume number) in the reader, and 1193 (Arabic numeral page number) and 1243 (e-page numbering which includes front matter) in the frame. That gets a bit confusing. Even so, the e-version has significant advantages as well. It allows bookmarking, per-page printing, and easy searching—very useful tools for the targeted user demographic.

Overall, while American Religious History: Belief and Society has some flaws, it is a welcome addition to encyclopedic resources on American religion, filling an important gap. As such, it should find its way to library reference shelves everywhere. Given the value-adds of the e-version, I would recommend that institutions negotiate a dual-purchase to secure that version for its catalog of electronic resources as well.