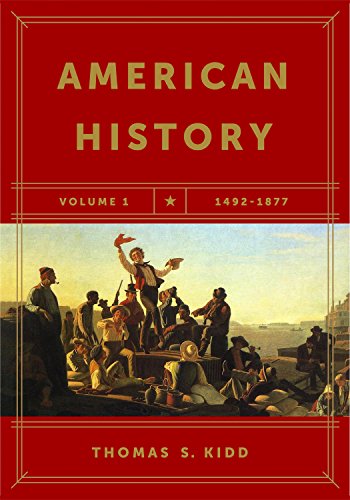 Teachers of college-level American History survey courses have dozens of options to choose from when assigning a textbook for their students. However, instructors who desire to assign a respectable U.S. History survey textbook that doesn’t simply parrot the secular progressive narrative that currently dominates the field of American history have very few options. Until recently, the best possible option was likely Unto A Good Land: A History of the American People, which was published by Eerdmans in 2005. Dubbed as a U.S. History text “that takes religion seriously,” Unto a Good Land nevertheless tended to segregate “religion” from the narrative of American history, and only a few of the six authors who wrote the text would even consider themselves to be conservative evangelical historians. While Unto a Good Land served as a viable alternative to the more widely used U.S. History textbooks, it was not entirely satisfactory, particularly to evangelical instructors and those teaching at Christian institutions. Thomas Kidd’s recently published work, simply titled American History, is the option that many Christian teachers of American History have been waiting for.

Kidd, who is a distinguished professor of history at Baylor University, is one of the most prominent and prolific evangelical historians in America today. His numerous published works are not only widely read by Christians but are also respected by his non-Christian peers in academia. It is not surprising, therefore, that with American History Kidd has produced what should be the standard textbook in U.S. History survey classes taught by evangelicals for years to come. American History reads like most of the U.S. History textbooks in use today. For instance, Kidd’s explanation for why Japan attacked Pearl Harbor (2:171–72) differs little, if any, from that found in textbooks written by secular scholars at elite Ivy League schools and state universities. The primary way in which Kidd’s work distinguishes itself from the standard textbooks in the field is in the fact that Kidd does not allow the reader to go more than a few pages without some reference to religion. In the case of Pearl Harbor, Kidd achieves this by quoting a chaplain who helped to identify those killed in the Japanese attack (2:171).

Kidd warns in the Introduction that “Readers should know that I am a Christian, and a Baptist in particular” (1:1). He goes on to explain that his Christian “commitment profoundly shapes my view of history.” One tangible result of this, he points out, is that he thinks “that religious people (which in America has mostly meant Christians), for all their faults, have generally been a force for good in American history” (1:1–2). One sees evidence of this nearly right away in Volume 1 when he deals with the Puritans. The authors of secular American History textbooks tend to focus on the flaws of the American Puritans and portray them as narrow-minded killjoys. In contrast, Kidd dedicates several pages (1:30–33) to somewhat sympathetically explaining the origins, goals, and motives of the founders of the Massachusetts Bay colony. Like his secular counterparts, however, Kidd also draws attention to their faults, namely their opposition to religious liberty, the mistreatment of their Indian neighbors, and their participation in the Atlantic slave trade. Kidd continues this pattern throughout both volumes, highlighting the contributions made by Christians in American history while also being careful to point out when Christians behaved badly, such as when the New Orleans Presbyterian minister Benjamin Morgan Palmer declared abolitionism to be atheistic and celebrated southern secession (1:247, 250).

Another feature of American History that sets it apart from most of its competitors is that it is written in the same engaging, clear, and reader-friendly style that characterizes Kidd’s other publications. Kidd succeeds in providing the basic narrative of American history, with many interesting and relevant vignettes woven into that narrative, without resorting to the overly academic or dry prose that is so often found in the most widely used American history textbooks. It is written for the average lay-reader and is the best available survey of American history for seniors in high school and those in their first year or so of college.

One of the few substantive complaints that can be leveled against American History is that there isn’t more of it. While most important figures, developments, and events are sufficiently explained, there are some which are relatively neglected. For instance, in the section dealing with the Bill of Rights, Kidd missed the opportunity to highlight the role that the Baptist minister John Leland played in adding the First Amendment to the Constitution. Kidd does point out that “James Madison assured Baptists that he would work toward a bill of rights” (1:110), but for the average lay reader or undergraduate, this does not adequately explain the origins of de jure religious freedom at the national level. In addition, while Kidd does mention Samuel Adams several times (though he is not in the index), the average undergraduate will likely not get an accurate sense from those entries of Adams’s significance as it relates to the outbreak of the American Revolution.

While it would be ideal if Kidd’s American History could be a bit longer and more thorough, it is without a doubt the best American History textbook available today for use in college-level survey courses. It is very well-written, includes numerous high-quality images and maps, and, most importantly, accurately explains the role that religion in general, and Christianity in particular, played in the shaping of American history. Kidd and B&H Academic are to be commended for producing this helpful and long-needed resource.