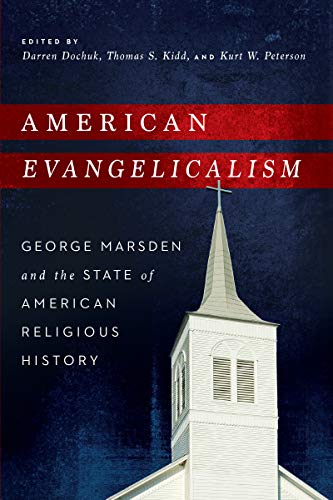 Religion is all the rage among professional historians, as a subject of academic inquiry if not personal devotion. According to a recent study conducted by the American Historical Association, religion is now the number one field studied by historians in the USA. Since at least the Watergate era, much of this historical attention has fixed upon various forms of theologically and morally conservative Christianity, especially Protestant evangelicalism and fundamentalism. One name looms especially large in this field: George Marsden, longtime historian at Calvin College, Duke University, and most recently the University of Notre Dame.

Marsden is an evangelical scholar whose body of work is widely regarded by the broader academy. He has published influential, often path-breaking books on topics such as 19th-century Presbyterian intellectual history, the origins of 20th-century interwar fundamentalism, the history of Fuller Theological Seminary as a microcosm of postwar evangelicalism, the decline of Christian sensibilities in American university life from the 1600s to the late-20th century, and a critical biography of 18th-century pastor-theologian Jonathan Edwards. The latter book won the prestigious Bancroft Prize, among other honors. In addition to his distinguished publishing record, Marsden has formally mentored almost thirty PhD students, played a significant role in professional historical societies, and directly influenced countless other religious historians. In American Evangelicalism: George Marsden and the State of American Religious History, Marsden’s former students and colleagues honor him with a collection of essays that assesses his most influential books and suggests numerous potential avenues for further research.

The book begins with a warm foreword by Nathan Hatch, Mark Noll, Harry Stout, and Grant Wacker; along with Marsden, these (slightly) younger historians have been the leading voices among evangelical historians since the early 1980s. But Marsden looms largest. In the introduction, editors Darren Dochuk, Thomas Kidd, and Kurt Peterson, all former Marsden students, argue, “No one has done more to shape and mainstream the history of evangelicalism than Marsden” (p. 8). The purpose of American Evangelicalism is to “use [Marsden’s] writings as a launch for wider discussion about past and future trajectories in the history of evangelicalism and American religion, the challenges and opportunities facing the next wave of religious historians, and the unchanging virtues of good historical writing” (p. 9). The remaining sections of the book each play off of one of Marsden’s major works by including a “state of the field” essay, a “scholarship profile” essay, and one or more “new directions” essays. The result is more than a festschrift; it is a primer on the historical study of American evangelicalism.

The state of the field essays do a fine job of contextualizing Marsden’s books within wider discussions among historians that those books often shaped. Doug Sweeney’s essay on Marsden’s contribution to Jonathan Edwards studies and Barry Hankins’s essay on Marsden’s pacesetting work in the history of fundamentalism stand out as especially insightful, while John Schmalzbauer’s essay on Marsden’s understanding of religion in higher education is more critical of Marsden’s failure to engage parallel research from the social sciences that would have added more nuance to his narrative.

The scholarship profile chapters have the benefit of being reflective review essays that are able to assess how Marsden’s work has stood the test of time. Sometimes Marsden’s work represented something of a capstone. Kidd shows how Jonathan Edwards: A Life (New Haven: Yale University Press, 2004) skillfully synthesized fifty years of scholarly interest in Edwards among both historians and theologians. More often, Marsden was on the front end of scholarly discussions he helped to shape. William Svelmoe and Darren Dochuk demonstrate how this was especially the case with Marsden’s Fundamentalism and American Culture (Oxford: Oxford University Press, 1980) and Reforming Fundamentalism (Grand Rapids: Eerdmans, 1987). Simply put, historians cannot write about twentieth-century conservative Protestantism without significantly engaging Marsden’s definitions and interpretations.

The new directions essays represent the bulk of the book’s scholarship. Sometimes these essays are helpful distillations of monographs published by former Marsden students. This is the case with Jay Case’s chapter on what he calls the African American Great Awakening following the Civil War, John Turner’s essay on Campus Crusade for Christ, and David Swartz’s discussion of the evangelical political left. Hopefully, readers will be encouraged to dive into the excellent books these chapters are based upon. Kathryn Long’s chapter on the interest in evangelical missionaries in postwar popular culture is not based upon a monograph, but rather several noteworthy articles Long published on the subject.

Some of the “new directions” essays themselves make noteworthy scholarly contributions. Timothy Gloege’s essay on Reuben Torrey’s theological journey offers a substantial revision to the received interpretation of the famous fundamentalist. Gloege’s own monograph on the Moody Bible Institute has been published in the months since American Evangelicalism hit the shelves and is generating considerable discussion among historians. Rick Ostrander’s essay shows how the numeric center of gravity for evangelical higher education has shifted southward in recent years, away from schools such as Calvin, Wheaton, and Gordon, though the southern schools often have looked to the northern schools for direction on how to integrate faith and learning. Meanwhile, Baptist-related schools such as Union University and especially Baylor University have attempted to catch up with and, in the case of Baylor, even surpass the better-known northern schools in terms of scholarship and academic prestige. Michael Hamilton’s chapter on continuities and discontinuities between D. L. Moody’s “interdenominational evangelicalism” and fundamentalism offers a significant challenge to current understandings of the fundamentalist-modernist controversy—one packing a lot of explanatory power.

American evangelicalism closes with an essay by Mark Noll that provides an insider account of how evangelical historians have become mainstays within the broader historical academy. Noll is uniquely positioned to write this chapter; arguably, he has been the most vocal proponent of evangelicals taking the life of the mind more seriously. Of course, Marsden’s work and influence have been crucial to the mainstreaming of evangelical history (Though the same could be said of Noll, who ranks a close second behind Marsden in terms of influence). Evangelical graduate students will find this chapter especially helpful as they consider their own place in this story.

American Evangelicalism is a model for how to turn a Festschrift into a book that demands to be read by more than those with a warm affection for the honoree. The combination of review essays, historiographical insights, and fresh scholarship make this book required reading for historians of American religion and a foundational work for graduate students. My one criticism is that the subtitle promises more than it delivers. Of the Marsden books engaged in this book, only The Soul of the American University: From Protestant Establishment to Established Nonbelief (Oxford: Oxford University Press, 1996) represents a wider discussion of American religious history. American Evangelicalism is really a book about the state of conservative Protestant history, which is a worthwhile topic in and of itself. In fact, as the field of American religious history is increasingly influenced by pluralism and multiculturalism—positive trends, on the whole—one hopes American Evangelicalism will convince emerging historians (including non-evangelicals) of the ongoing value of studying topics such as fundamentalism, evangelicalism, spiritual awakening, and denominational controversies. Highly recommended.