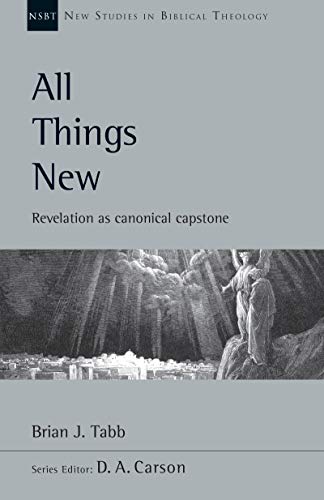 Reading, writing, or preaching the book of Revelation need not be like Alice falling down the rabbit hole into Wonderland. Granted, there are complex passages and multiple OT allusions which can make it challenging. However, as Brian Tabb shows in this addition to the NSBT series, tracing key biblical theological themes makes it possible to form a coherent interpretation of the Apocalypse that benefits both the academy and the church.

So why another book on Revelation? One reason is that much of the existing material is either set on predicting the future or has decided to confine the book to its historical context, but Tabb provides an alternative approach. He adopts an eclectic position, suggesting that Revelation “is a book—indeed, the final book—of Christian Scripture meant to decode our reality, capture our imagination and master our lives with the word of God and the testimony of Jesus” (p. 2, emphasis original). The central thesis of his work is an expansion of Bauckham’s argument concerning Revelation as the climax of prophecy. Tabb wants to take this a step further, recognizing that the canonical position of the book means that it is not only the climax of prophecy but the capstone of Christian Scripture. Revelation is not a detached piece of literature but the “fulfilment or goal of previous prophecy” (p. 19), the “grand conclusion in the already-not-yet reign of Christ” (p. 24). Allowing the location of the book to frame and shape our interpretation of its message is something which I fully agree with and I am grateful for Tabb’s work in highlighting this important hermeneutical principle.

Making a claim is one thing, however; substantiating it is another. Across the four sections which make up the body of this work Tabb does provide a convincing case for viewing Revelation as the canonical capstone. Some may like to have seen detailed engagement with the Apocalypse’s checkered history in the early church’s process of defining the boundaries of the canon, however, I do not think that this detracts from the book. Each section traces a theme across the OT which finds its climactic fulfilment in Revelation. The themes are as follows: the Triune God (chs. 2–4), Worship and Witness (chs. 5–6), Judgement, Salvation and Restoration (chs. 7–9), and the Word of God (ch. 10).

Two chapters help to illustrate how Tabb fleshes out his thesis. First of all, in chapter 6, he discusses the place of the nations in the Apocalypse and the battle for universal worship. The OT is replete with passages concerning the place of the nations and the opportunity for them to draw near to God. In light of Christ and the climactic role of Revelation, the choice which has always been discussed and issued in Scripture is given unmistakeable clarity. As the capstone of the canon, Revelation places a binary decision before all the peoples of the world: will you worship God and the Lamb or the dragon and the beast? This is not only helpful as it shows the connections between the Apocalypse and passages from Ezekiel and Zechariah, but it reminds the reader of the pressing need for all nations to have uncompromised gospel witnesses who are worshiping the Lamb, inviting those they live beside to join them from among all peoples in giving glory to God.

In chapter 8, Tabb draws upon the theme of the urban world across scripture, demonstrating how the Apocalypse utilises OT depictions of the city such as Babel (Gen 11:1–9) and Tyre (Ezek 27:1–28:19) to make sense of the prominent influence of Rome in the everyday lives of the believers in the first century. As an aside to his main thesis, Tabb helpfully argues that “Babylon is not simply a cipher for Rome but is a rich biblical-theological symbol for the world’s idolatrous, seductive political economy” (p. 164). Standing at the climax of Scripture, John presents believers with a radical Christocentric alternative. They are to focus on the coming new Jerusalem, the faithful bride (21:1–22:5) as opposed to the great whore, Babylon (17:1–18:24). In an increasingly urbanized world, where compromise with Babylon is only a click away, it is important to remember “the bride’s enduring beauty and the harlot’s borrowed bling” (p. 183).

At a more mundane level All Things New provides a number of helpful tables laying out passages from the OT alongside their counterparts in Revelation that some will find very helpful. The bibliography is also a good resource as it identifies not only the main contributors to studies in Revelation, such as Beale and Bauckham, but more recent articles and texts as well.

In recognizing the canonical position of Revelation, and by handling it as a book within the wider context of the canon of Scripture, Tabb offers the reader a very helpful guide to making sense of the climax of the canon. I find his argument and assessment convincing and would recommend this volume to any student, pastor, or lecturer who is preparing to teach on the book of Revelation.