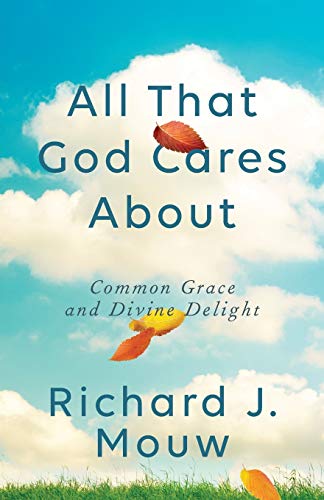 All That God Cares About: Common Grace and Divine Delight

The doctrine of common grace forms a pillar of Dutch Neo-Calvinist theology of culture. Tracing its mature articulation to Abraham Kuyper (1837–1920), the doctrine as Richard Mouw understands it affirms that God restrains the full effects of sin upon humanity in order to allow his original purposes for his creation to develop and mature across history. Mouw’s thesis in this book is that God’s providential restraint of sin in common grace is an expression of favor, and such favor should inform how humans view creation and their place in it. As God delights in the good works of humanity, so should we. Such shared delight in the goodness of creation should produce a distinct cultural ethic that takes seriously the call to ameliorate sin and suffering in the world, while also seeing the beauty and importance of embodying cultural forms that glorify God, such as “well-written poems, Bach concertos, and sound arguments” (p. 27).

Mouw has long been associated with Kuyperian common grace and stands at the center of an effort to renew interest in Kuyper’s thought, especially among non-Calvinist evangelicals. He offers this latest book as an “aggiornamento,” or an updating and expanding of his thoughts on common grace (p. 1). His goals are threefold. First, he seeks to expand his argument, initially offered in He Shines in All That’s Fair (Grand Rapids: Eerdmans, 2001), that common grace concerns God’s favor and delight towards all humanity. Second, he seeks to clarify misconceptions concerning common grace in general, and his own thought in distinction from critics more particularly. Finally, he aims to address how Kuyperian common grace can be embraced by those outside the Dutch Reformed tradition.

Against the backdrop of a type of Calvinism which sees all historical occurrences as simply means of expressing God’s decrees of election and reprobation, Mouw argues that common grace helps show the complexity of God’s intent. He summarizes, “the Creator of the world has very broad interests. The Lord rejoices in all of his works. God is really fond of daisies and deer and oak trees. This means, then, that we have to take this broader divine agenda serious” (p. 31). God certainly cares about his economy of salvation from sin. However, Mouw stresses, it is not all that he cares about, and the fact that he has purposes that are not reducible to salvation help construct a broader vision of what salvation is for: “To be redeemed from sin, then, is to be restored to the patterns of obedient cultural formation for which we were created” (p. 77).

A major issue in debates over common grace has been whether to define God’s restraint of sin as grace in the proper sense. Though Mouw ironically discovered the doctrine of common grace and its broader importance for social ethics through the writings of Cornelius Van Til, he argues that Van Til and others like Herman Hoeksema and Klaas Schilder esteem non-Christian thought and cultural forms to have no enduring value. Therefore, in Mouw’s assessment, they fail to deal with the complexity of the biblical narrative and the best of the Reformed tradition. He points to scripture passages such as Revelation 21:25–26 and Isaiah 60:1–9, in which he sees the treasures of unbelieving culture being brought into the eschatological New Jerusalem. He highlights how for John Calvin and Herman Bavinck the Spirit is understood to be at work among non-Christians in general revelation and the gracious illumination of it. Such internal work of the Holy Spirit among the unregenerate, for Mouw, goes far in accounting for how non-Christians can create truly good and beautiful things in which God delights.

In the final portions of the book, Mouw turns to consider the future of reflection on common grace, especially for those outside the Dutch Reformed tradition. Does common grace thinking need to retain its “Dutchiness” to remain faithful to Kuyper’s vision (p. 124)? Mouw thinks not. Instead, those interested in a Kuyperian social ethic from non-Calvinist traditions should appropriate common grace thinking while maintaining robust commitments to their own traditions. A model for this is the growth of a more generic Calvinism that does not require strict adherence to the Reformed confessions, as exemplified in the contemporary “New Calvinism” movement (p. 137). However, he cautions that “New Calvinism” has often adopted the reductionist soteriology of the Dutch Reformed theologians who reject common grace. This combined with certain personalities of New Calvinism’s leadership, as well as its complementarianism, accounts for the historic distance between the New Calvinists and the Dutch Neo-Calvinists.

Readers familiar with Mouw’s work will discern his unwavering, long-held commitments on common grace. With little here by way of expansion of what he has said elsewhere, he does provide helpful clarification of several issues. He rejects the association of common grace with universalism, and highlights how common grace is not grounded in any ontological relation between God and the world, but rather in God’s will to delight in anything which he could or would make.

Some readers will be troubled by Mouw’s insistence on the Spirit’s work of internal illumination of the unregenerate, and his open stance on the fate of the unevangelized. Others may be unimpressed at Mouw’s haste to resort to mystery in accounting for how common grace reconciles with Calvinism’s commitment to total depravity. This insistence which appeared in Kuyper’s day still needs exploring: Can Calvinist models of God’s providence consistently integrate common grace with their understandings of God’s decrees and the determination of all things? Mouw clearly thinks so, but there is more that needs to be said. In the end, however, this delightful study fittingly summarizes the doctrine of common grace that has so impassioned Mouw throughout his career.

Dennis Greeson is associate director of the BibleMesh Institute and a PhD candidate at Southeastern Baptist Theological Seminary in Wake Forest, North Carolina.