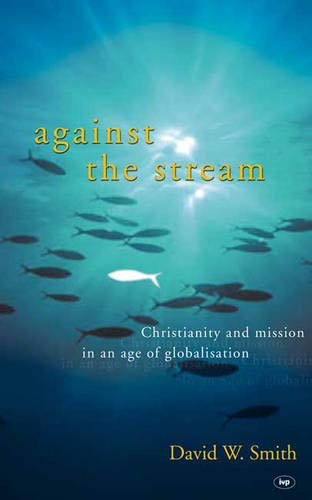 AGAINST THE STREAM: CHRISTIANITY AND MISSION IN AN AGE OF GLOBALIZATION

This collection of eight papers exploring the area defined by the subtitle comes hard on the heels of Smith’s excellent Mission After Christendom (DLT, 2003), and represents the continuing patient probing of one the clearest thinkers in evangelical missiology today. It is ‘against the stream’ in that it wants to see Christianity and mission as inevitably counter-cultural, as well as being opposed to certain prominent strands of thinking, especially what Smith terms ‘revival optimism’ in various recent accounts of impending growth and development. Instead, he avers, the church in the West continues its stumble into disarray, compromised with its host culture, affluent and consumer-driven in the eyes of the world church. The baton of mission has passed to the South, and ‘modern’ social commentators will have a field day portraying the southern churches as fundamentalist and/or superstitious.

In the light of this, Smith argues, various challenges face the (evangelical) church today. For one thing, it needs to rediscover lament as a key mode of speech before God. For another, it needs to learn to live ‘beneath the cross’, in a sense envisioned by Moltmann’s distinction between the cross as our foundational authority but yet always as serving a critical function with regard to our doctrinal and devotional self-evaluation. Smith is gentle, perhaps too gentle, with resurgent doctrinal authoritarianism: this chapter (‘Mission Beneath the Cross of Christ’) needs urgent heeding lest some streams of evangelicalism implode into self-righteous irrelevance on the world scene.

A strength of the book is its global vision: as a practitioner still traveling widely even while researching mission at international Christian College in Glasgow, Smith genuinely sees how the North looks from Nigeria, or South America. The shadow of anti-Islamic fundamentalism in the wake of 9/11 hang over the book: what voice can evangelicals have against modernity when they seem to shelter behind modernity in its critique of Islam? A chapter on ‘Mission Africa—then and now’ returns to the ‘beyond Christendom’ thesis. As with the earlier book, Revelation provides a powerful scriptural challenge to western thinking.

Two thoughts. In Mission After Christendom Smith suggested that:

the modern missionary movement was a specific, culturally conditioned initiative which, while amazingly successful in its time, is likely to become increasingly dysfunctional if the attempt is made to preserve it in the new context we have described (116–17).

In this new book challenge runs beneath everything he writes but he does not spell it out. Here we have snapshots of the dysfunction without the full analysis: I suspect the reader needs the earlier book to see the overall picture.

Secondly, I was provoked to rethink the role that Scripture plays in evangelical missiology. It is one thing to move from some evangelistic proof texts to a biblical theology which takes God’s call on the nations seriously, but Genesis 12:3 (a foundation for Smith’s last chapter) is not necessarily a promise of blessing in this sense, and for every prophet situating Israel as a light to the nations there is one predicting the glorious destruction of Gog and Magog as ruthless vindication of nationalistic conception of God. Would that it were not so, but the OT speaks with as wide a range of voices on this as it does on praise and lament (which is a tension Smith does take up). Neither is it obvious that the ‘conversion’ of Nebuchadnezzar in Daniel 4 (frequently given paradigmatic status here) is in fact a conversion to YHWH the God of Israel, but rather exactly the kind of syncretistic rearranging of labels which Smith critiques so ably in modern mission work. There is a lot more to be done in this area.

Even so, and in short: evangelicals in mission work of any kind should avoid this book at all costs if they want a quiet life.