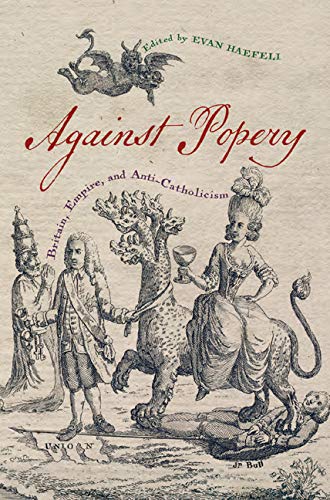 Against Popery: Britain, Empire, and Anti-Catholicism

Historians such as Philip Jenkins have called anti-Catholicism in America “the last acceptable prejudice.” As the wide array of literature on this topic makes clear, concern about Roman Catholicism has a long and deep history that stretches back to the 1600s. However, anti-Catholic thought is by no means limited to America. Its origins come from England and Scotland. While historians such as Anthony Milton have written extensively on anti-Catholic thought in England, Against Popery advances the field of anti-Catholic studies by showing how anti-Catholic thought—particularly fears about Roman Catholic political power and freedom—unified the seventeenth- and eighteenth-century British empire, provided a point of cohesion amongst British colonies in North America, and led in part to both an eventual undoing of the British empire and an emergence of religious liberty for Roman Catholics.

Some of the book’s main points that recur in multiple essays deserve brief mention. First, different essays discuss the large definitional challenges with terms such as “anti-Catholic” or “anti-papal.” Unfortunately, scholars use these terms in diverse and, at times, contradictory ways, so readers must pay careful attention to definitions. Evan Haefeli summarizes John Wolffe’s helpful taxonomy of four different strands of anti-Catholic thought. Second, anti-Catholic thought played a much more important role in shaping cultural hegemony and forming debates about political liberty than historians have hitherto acknowledged. It not only divided Catholics and Protestants but also pitted Protestants against each other.

Additionally, the socio-cultural and political concerns that gave rise to anti-Catholic machinations transferred naturally to anti-Puritan thought. In other words, many of the same species of arguments used against Rome, and their underlying motivating fears, reappeared against Puritans. Also, anti-Catholic thought spanned the British empire and allowed the American colonies to cohere. Ironically, it served as an impetus for the colonies to rebel. Finally, fear of Catholic tyranny led to anti-Catholic thought and the curtailment of religious liberty in the British empire.

Nonetheless, at times, some essays largely imply that any opposition to Roman Catholic doctrine entails “prejudice.” In addition, perhaps not surprising for a work that focuses more on cultural-political history than theological history, Against Popery contains a handful of inaccurate statements about Protestant theological history. For example, Laura Stevens writes that the “elevation of the Virgin Mary within popular devotional practice and eventually within church theology” during “the late medieval period … was at the core of the Protestant critique of the Roman Catholic Church beginning with Martin Luther” (p. 170). However, matters such as indulgences, papal power, the role of Scripture, and justification by faith alone played a more central role for Luther.

In conclusion, Against Popery provides a wide-ranging treatment of anti-Catholic thought in the British empire. While the book focuses primarily on socio-political thought (instead of historical theology) from 1600 to 1850 and the authors assume a substantial amount of background knowledge on the part of the reader, for scholars or educated laypeople interested in the nexus of anti-Catholic thought, political history, and the British empire, Against Popery will prove both interesting and fruitful.