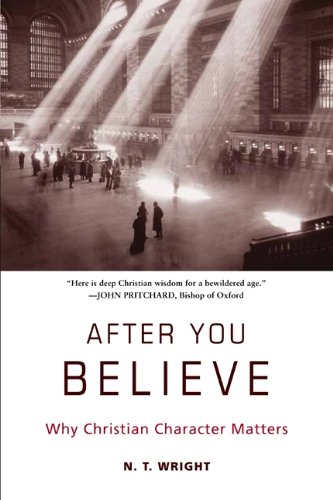 After You Believe: Why Christian Character Matters

What are we here for? What constitutes a “good life”? What does God want from us? N.T. Wright applies his considerable biblical acumen to these questions as he seeks “a fresh reading of the moral thrust of the New Testament” (p. 67). The book doesn’t set out to deal with ethical or moral questions or to offer a fine-tuned study of character traits. Rather, Wright looks at the big picture, the overall theological framework, for living the Christian life.

Wright’s biblical framework is decidedly teleological/eschatological: “The basic point is this: the Christian life in the present, with its responsibilities and particular callings, is to be understood and shaped in relation to the final goal for which we have been made and redeemed. The better we understand this goal, the better we shall understand the path toward it” (p. ix). This emphasis on God’s final redemptive purpose makes this book in some sense a sequel to Wright’s earlier work Surprised by Hope (2007), which sets forth the NT eschatological vision of resurrected believers populating the new heaven and new earth (versus the common conception of disembodied souls occupying an ethereal heaven). We are not only saved from sin; we are saved for a new purpose—to fulfill God’s design when he first created human beings in his image to have dominion over his creation. Knowing what we are made for is essential to our understanding of how we ought to live.

Wright’s teleological focus links him to the classical ethical tradition, exemplified in Aristotle’s Nichomachean Ethics, which took as its starting point a functional understanding of humanity. Moral arguments within the classical tradition involve the notion of an essential purpose or function for human beings and an understanding of the virtues as the habits of character that enable one to function properly and to achieve this purpose. The NT writers, Wright contends, took over this classical framework, but they reworked it radically in the light of what God has revealed in Christ. The similarities and significant differences between the classical and Christian conceptions of human purpose and the virtues appropriate for that purpose provide a running theme through the book.

Wright presents his framework in contrast to two foils. The first is the “rule-based” or categorical conception of morality. Rules, in his view, are “at least part of the truth” (p. 44), but a “rules-based mentality” always fails, not only because, in our depravity, we fail to keep the rules (resulting in despair), but also because rules are by nature restrictive and cannot change our hearts (resulting in pride). In a helpful discussion, Wright contends that rules serve as signposts and warning signs, or even crash-barriers, on the highway. They are important to keep us on track if something goes wrong but unnecessary for those who have learned to drive properly (p. 199). Paul as a pastor uses rules in his epistles to help his readers avoid a crash, and they may also help us in uncharted territory; but Paul’s greater concern is with the development of the virtues, and especially love, which inherently lead us down the right road. Christian virtue is both the gift of God and the result of the believer making conscious decisions to cultivate this way of life (p. 197). The fruit of the Spirit and the virtues are two ways of saying the same thing (p. 206), though the last of Paul’s Spirit-inspired fruit, self-control (Gal 5:23), reminds us that to get this fruit you need to be a gardener (p. 196), exerting persevering effort and practice over time to yield a harvest. Even this, however, is a Spirit-empowered effort enabled by God’s grace (p. 60).

Wright’s second foil is the view that morality is essentially self-expression, being authentic to oneself. This approach has become increasingly popular in our anti-authoritarian and emotive age. Wright finds truth here, but again human depravity distorts. The “self” to which we are to be true is not our fallen self, but our redeemed and transformed self, our new self in Christ.

Here biblical eschatology comes fully into play. Jesus, through his death and resurrection, has brought about a new way of being human that fulfills God’s purpose of being royal priests in his creation—righteously ruling over God’s world and reflecting back to him the praise of his glory. Our future destiny is now realized in Christ, and the call of Christian virtue is to “put off” what belongs to our old earthly nature and to “put on” what is now ours in Christ and thus enter into this divine purpose. “What counts is the formation, in the present time, of a character that properly anticipates the promised future state” (p. 141).

Kierkegaard once wrote that life must be understood backwards, but it must be lived forwards. Jesus Christ, Wright contends, allows us the luxury of doing just that. He has shown us our end, our telos, and we can now live forwards in the light of it.

This is not a book for new Christians (don’t be misled by the American title), nor is it a “how to” book on Christian living (though his final chapter on “practices” is very helpful, especially his strong words on the primacy of Scripture in spiritual formation). The book’s content is frequently insightful (see, e.g., his reflections on “conscience” [pp. 159ff.]); its prose is sometimes uplifting (love “is a language to be learned, a musical instrument to be practiced, a mountain to be climbed via some steep and tricky cliff paths but with the most amazing view from the top” [p. 183]); but its style is often rambling and the train of thought is sometimes difficult to follow. Wright’s illustrations, however, keep the reader’s interest and help to make the abstract ideas concrete. Apart from a few minor quibbles, I recommend the book as a stimulating look at the nature of the Christian life—what ought to happen between initial faith and final glory.

Bill Kynes is the pastor of Cornerstone Evangelical Free Church in suburban Washington, D.C., where he has served since 1986.